Not too many people outside of Ewell’s inner circle were picking him to win his Octagon debut against former UFC champion Renan Barao. Ewell believed. And he won.
By Thomas Gerbasi • Dec. 26, 2018

Andre Ewell is a talented fighter with a bright future in the sport of mixed martial arts. You don’t pick up 14 wins on the regional scene and get a call from the UFC without having that talent and potential.

But not too many people outside of Ewell’s inner circle were picking him to win his Octagon debut against former UFC bantamweight champion and pound-for-pound list member Renan Barao in September.

Ewell believed. And he won.

“I’m gonna have to change my nickname to Mr. AM, because I wake people up,” laughed Ewell, who is sticking with “Mr. Highlight” for the moment. “In my eyes, he was just another guy that was across the cage and I’m always gonna feel that way because everyone who fights is just another guy to me. I don’t see what other people end up seeing. I’m telling them that I’m literally fighting bigger things.”

That fight, documented here before his fight with Barao, is to win the custody battle for his five-year-old son, Eli Edward Ewell. In January, Ewell hopes that a court date will produce a positive outcome and make all the sacrifices of his fighting life worth it. And while the 30-year-old is fighting for his son, getting him back will not take any of that motivation away. It will only turn it in a different direction. 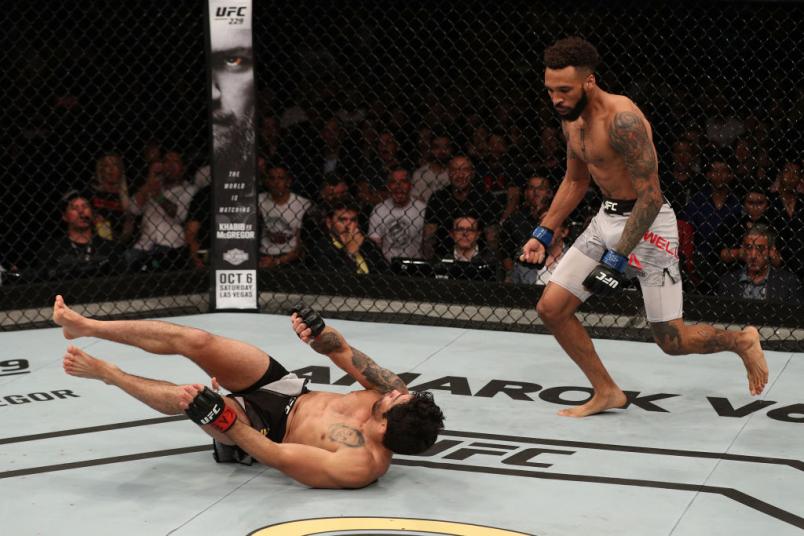 SAO PAULO, BRAZIL - SEPTEMBER 22: (L-R) Renan Barao of Brazil gets knocked down by Andre Ewell in their bantamweight bout during the UFC Fight Night event at Ibirapuera Gymnasium on September 22, 2018 in Sao Paulo, Brazil. (Photo by Buda Mendes/Zuffa LLC/

“It’s one of those situations where he gets to understand why I’m doing what I’m doing,” Ewell said. “I fought to get you, and now that I have you, I have to continue to fight to keep you. It’s one of those things like, ‘Oh, you made it to the UFC, you’re good, you’re done.’ It’s more than that. I got here and that’s only one part of my goal. My next goal is to get my son. As soon as I get him, now it’s to keep it all. When I had him I thought I was on top of the world, and when they took him away from me, I was at the bottom. So I’m doing everything I can to get back to being able to breathe. I’m still at the bottom of the hill in my eyes. He’s my hero, but at the same time I’m fighting to be his hero because I’ve got a lot of catching up to do.”

It’s a powerful motivator, more than fame, money or belts. So when Ewell traveled from his home in Riverside, California to go to Barao’s home country of Brazil, he wasn’t rattled. And when the Octagon door shut, the first-time UFC jitters were non-existent.

“When I say the cage is my home, it’s really my home,” he said. “You don’t get nervous when you use your own restroom; it’s your house, it’s your restroom. The day that you get nervous, you’re gonna either want to move or you’re gonna start coming up with the supernatural stuff saying that it’s haunted.”

He laughs, but he means it, and he fought like it, getting out of some dicey situations on the mat early in the fight to roar back and take over in the next two rounds. The verdict was split, but Ewell will take it, as he extended his current winning streak to five heading into a Saturday meeting with British up and comer Nathaniel Wood. On a stacked card, the prelim matchup could still steal the show, and though Ewell is seen as an underdog once more, that’s not an issue.

Well, Andre Ewell probably won’t be an underdog again for a long time. So what does he possibly do for an encore in 2019 should he end this year with two UFC victories?

“After this fight, I’m calling Cody,” Ewell said of another former world champ, Cody Garbrandt. “I have a list of all the people they feel are the greatest fighters in the world at the weight class, and these are the ones I’m going for. That’s gonna be my encore.”