Evinger: "I should win off talent alone" 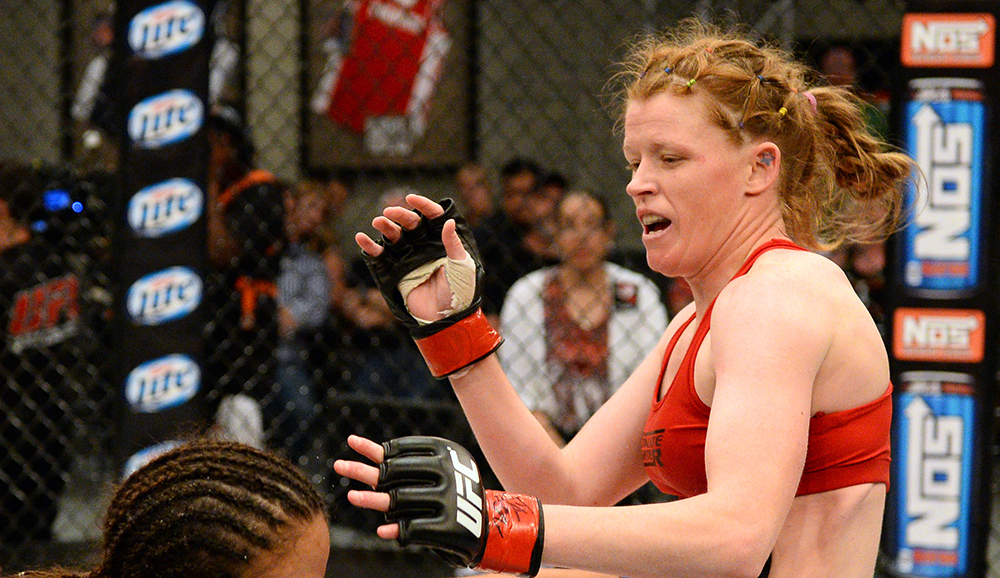 After more than 12 years as a pro fighter, Tonya Evinger has developed a pretty good poker face. So it’s hard to gauge how she’s feeling with the cut back to 135 pounds after a one-fight visit to the featherweight division against Cris Cyborg last year.

“I don’t care – I’d much rather fight in my weight class,” she said. “I hate when I have to cut weight, but that’s what I get paid for. I just want to fight. My whole point in everything is just fighting as much as I can.”

And after a string of fighting no more than twice a year dating back to 2014, Texas’ “Triple Threat” may finally get her chance to compete as much as she wants to in a stacked bantamweight division. This Saturday, she faces unbeaten Aspen Ladd in Las Vegas, and it’s an opportunity to make an impression on a UFC fan base who didn’t get to see Evinger’s full arsenal against Cyborg.

“I think that last fight, with the short amount of time that I was able to prepare for it, and the difference in size, I had to go with a different game plan just for the fact that I didn’t really have a lot of time to get ready. I really didn’t get to do anything in that fight that I normally do.”

She did take the fight on short notice and gave a gutsy effort, and while she was stopped by Cyborg in the third round, you get the impression that Evinger would do it all over again, simply because that’s what fighters do. And she remembers that on the ladies’ side of MMA, opportunities like this were often few and far between in the early years of her career.

There were times of light, though. A 2007 bout with Gina Carano, a 2008 bout with Julie Kedzie, and ultimately, a contract with Invicta FC. It was in the all-female promotion that Evinger went 7-0 with 1 NC, winning the promotion’s bantamweight title along the way. Regardless, when Evinger signed to fight Cyborg last year, there were quizzical looks from some folks who knew of the UFC and nothing else.

“It’s funny, I get these messages all the time saying that they never even heard of my name and I’m like, ‘Wow, where have you all been?’” she laughs. “But I’ve done a lot and put in a lot of time and I’ve fought some really good opponents throughout my career. It doesn’t matter who I fight or when I fight or where I fight, though, they always think I’m the underdog and need to prove myself. So that’s what I do every single time.”

This weekend, the next in line is Ladd, who went 5-0 in Invicta with wins over Sijara Eubanks and Amanda Cooper before debuting in the UFC a year ago with a TKO of Lina Lansberg. Needless to say, Ladd is on a roll, but Evinger believes that she’s only getting better.

“I feel like I’m a high-level athlete, and any sport I compete in, I always do really well, and I think I’ve figured myself out in a sense where it doesn’t even matter if I’m training with the best team and the best coaches and the best everything,” she said. “I’ve figured out how to fight the best way that suits my style, and I think that’s the most important thing, especially in a sport like this. Everybody’s got something different and the cookie cutter fighters are usually the easiest to beat. So, being so unorthodox and coming in here, I really figured out my style and what works for me and how to utilize it and I think that is what constantly keeps me winning.”

It’s a gift to still be evolving at 37, but Evinger’s body of work over the last several years shows that it’s not just wishful thinking on her part. So Evinger’s ready to make a run at bantamweight gold. Now.

More than a dozen years of prizefighting will give someone that kind of confidence, but more than a snappy soundbite, it’s the way Evinger has come to grips with this hardest of sports.

“Of course, every fighter’s scary and every fight is scary because you don’t know if you’re gonna win or lose but, at the end of the day, I should win,” she said. “So if I take away all the nerves and all the pressure and just go out there and fight, I’ll perform well and then I just gotta worry about being a smart ass on top of that.”

She laughs, the poker face giving way once more.