Everything Is Falling Into Place For Dustin Jacoby

In His Second Stint With The UFC, Dustin Jacoby Is Racking Up Wins And Climbing The Ladder.
By THOMAS GERBASI, ON TWITTER @TGERBASI • Nov. 23, 2021

It’s a few days after Dustin Jacoby’s win over John Allan at UFC 268 on November 6, and the golf course is not exactly where you would expect to see “The Hanyak” after going three rounds to get his victory.

But there he is.

“Just finished the first nine and I'm looking to go even lower on the back,” laughs Jacoby, smoothly knocking out a few interviews while on the links after a business trip to New York City that didn’t play out exactly as planned. Sure, he was going to the Big Apple to corner his Factory X teammate Jordan Williams, but while on a hunting trip the weekend before the big card at Madison Square Garden, he was asked if he was interested in getting into a fistfight in less than a week.

“When I first found out about it Sunday night, I was like, ‘No way, man, how am I supposed to do this? I'm in an elk camp.’ But my coach (Marc Montoya) said, ‘No, I promise you, I love the matchup, I think you win this fight all day, ten times out of ten times. You need to take this.’ And I trust his judgment. I said, ‘All right, man, let's roll with it,’ and I'm so happy I chose to do so.”

Jacoby, who extended his current unbeaten streak to six with a first-round stoppage of Darren Stewart in August, was in, and he didn’t even have to convince his wife Kahla that it was a good idea to take his fourth fight of 2021.

“She knew before me,” he said. “I was in the middle of the woods and I didn't have reception. So my coach called her, she called my buddy's sister, she texted him and then he told me while I was sitting by the campfire.”

And when he got back home?

“Yeah, we're fighting this weekend,” he told his bride.

“You've been training, you've been working, go get it done,” she responded. 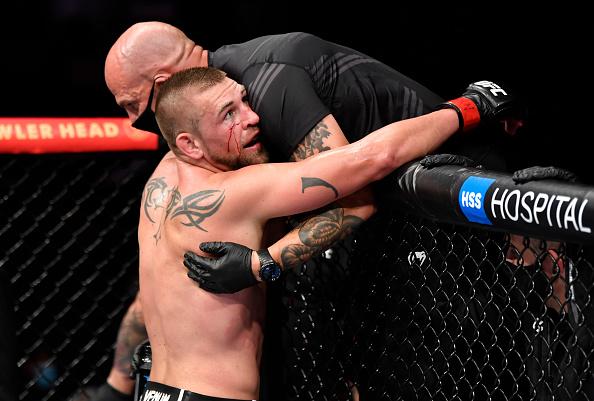 Dustin Jacoby reacts after the conclusion of his light heavyweight fight against John Allan of Brazil during the UFC 268 event at Madison Square Garden on November 06, 2021 in New York City. (Photo by Jeff Bottari/Zuffa LLC)

He did, winning a competitive fight by unanimous decision over a tough foe. It’s not how most would choose to spend a Saturday night in New York City, but guys like the 33-year-old Jacoby are built different than most, so as Allan threw hammers at him, he was smiling and taking it all in.

“I've never felt better on fight night,” Jacoby said. “I was just excited to go out there and perform and the crowd made it fun. I've been fighting at the APEX behind closed doors, and I got a bit of a warm welcome there in New York walking out. It made me really appreciate where I was, and it let me know that the fans appreciated what they've seen this past year out of me and I carried that that into the fight with me. It was impossible not to be excited and happy for that moment.”

As for his ability to keep those good vibes going for 15 minutes of a prize fight, Jacoby says, “I just told myself to not think. It wasn't about what I had done in the past five days or the past month. It's about what I've done the past decade of my career and I just had to go out there and trust my instincts and trust my preparation and the time I've spent inside the Octagon and make the most of it.”

To some, Jacoby is the “new” guy who came off Dana White’s Contender Series in 2020 and hasn’t lost in the Octagon since. That’s not even half the story when it comes to a fighter who had two bouts in the big show in 2011-12, lost both and got cut, then went to the regional circuit to rebuild while also kicking off (pardon the pun) a kickboxing career that saw him spend several years at the top of the sport in Glory before a full-time return to MMA in 2019. Yeah, Jacoby is no newbie. 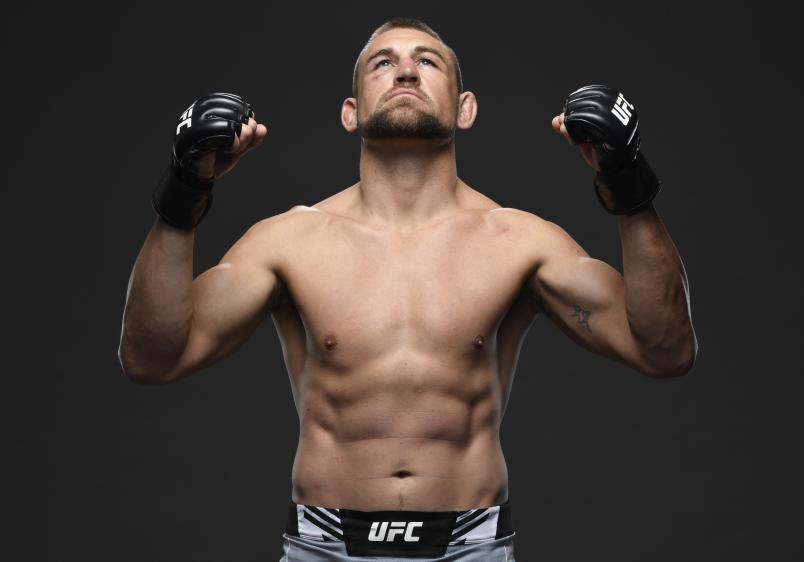 Dustin Jacoby poses for a portrait after his victory during the UFC 268 event at Madison Square Garden on November 06, 2021 in New York City. (Photo by Mike Roach/Zuffa LLC)

“I tell people often that I've been through it to get to it and that experience that I take into the Octagon with me every time I step in there, it's invaluable,” he said. “There's no way to put a value on it. It's just so valuable and precious to me and I know what I've been through. I've locked horns with some really great athletes, including now in the UFC. I fought a guy like Maxim Grishin, who missed weight, was probably every bit of 240 going into the fight, and anytime I fight somebody smaller now, it's like, ‘How are they gonna do anything to me that this other guy didn't do?’ So, I'm taking those experiences with me and I'm battle tested man. I've been hardened in there and when it's time to perform, I think I'm ready to compete at the highest level.”

He’s proved it. Now as he prepares for his 2022 campaign, it may be time for Jacoby to start thinking about where he fits among the contenders in the 205-pound weight class.

“Well, it's getting to that point, but none of that matters unless you're winning, so I can't lose focus,” he said. “I gotta continue working hard, I gotta continue moving the chains daily and I've gotta continue going out there and beating these guys, and everything else will fall into place.”