"It's not going to go to the distance because neither one of us are
distance fighters. We're going to stand there punching and kicking each
other until one of us quits." - Pat Barry 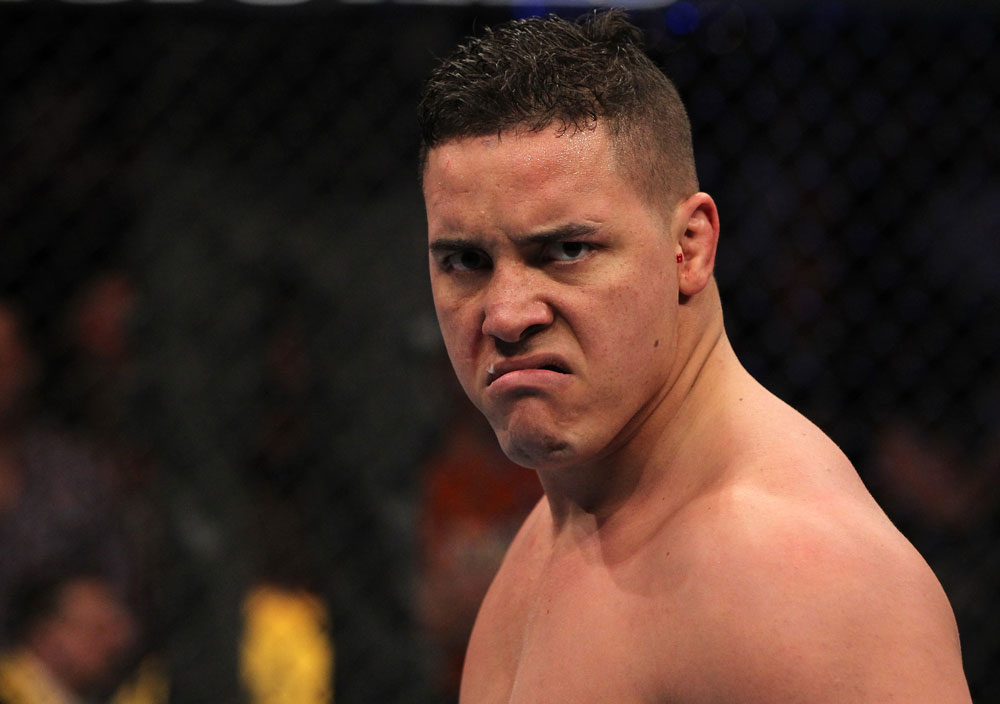 They say “behind every great man, there’s a great woman” and in Pat Barry’s case - this woman can kick your ass. Standing at 5’5” and weighing in at 115 pounds, Rose “The Riveter” Namajunas has been busy tearing up the women’s amateur ranks at strawweight. Set to make her pro debut on January 5th Invicta FC 4, it seems to make sense that the UFC heavyweight would need to have an equally formidable lady. Although the way Barry tells it, it’s not the expected tale of her keeping up with him; it’s the 10 year veteran of professional kickboxing / mixed martial arts who is in awe of his next generation of fighting significant other.

“When she fights, I have to be the absolute worst cornerman in the world,” exclaims Barry. “I have got to be! I am going to win an award for being the worst cornerman ever because when she is fighting, as I'm calling stuff out, I'm jumping up and down, screaming, and high-fiving people! I end up watching her fights and end up watching them being a fan. It's so uncontrollable! I get so nervous before the fight, like ‘throw-up’ nervous. Then she's so badass, she's so good, she's bad as [expletive]! She's a hybrid werewolf-vampire! She's a combination of the two. She's so good. She's the new evolution of a fighter! I've worked my way up from nothing to nowadays, but now, they are starting off running up walls, throwing kicks, and then a fireball. That's where the evolution of the fight game is, that that's where they're starting at nowadays. She's starting as a ridiculous striker, a ridiculous wrestler, undefeated in jiu-jitsu. She's starting out stone-faced, Ivan Drago, like ‘if you don't win, you don't eat’.”

At 33 years old and preparing to enter the Octagon for the 10th time, if finding love wasn’t enough, Barry has found his greatest insight into being a fighter through Namajunas. In general, it’s not easy diagnosing one’s own problems and, even more so, the solution to fix them. As “The Riveter” and “HD” train in tandem for caged combat like an intergender tag team, Barry can objectively oversee what Namajunas is going through good and bad, and, for the first time, realize that he is going through that as well. In a way, they are each other’s mirror.

“What it does, it helps me understand more of myself,” explains Barry. “Working with her, training with her. Of course, I'm not her only coach, but she helps me understand myself more, watching all the emotional ups and downs that she has. Anyone who says they don't get nervous before a fight is a liar. You tell them I said that. Anyone who doesn't have second thoughts or have doubts is no good and shouldn't be doing this. The mental side is way worse that the physical side. The punching and kicking is easy, that's the easy part. Wanting to do that is the tough part. Watching her, I'm able to figure things out about myself by being with her side-by-side as she is going through these ups and downs. That's been great. She's my best friend. She's my most important training partner. She's been able to help me learn so much about myself just being around her. I can't say thank you enough.”

While the two are certainly smitten with one another, there is something Namajunas doesn’t care for about Barry and it’s getting worse: his hair. “She likes it every five minutes, but that's it. Other than that, it's horrible,” admits Barry who isn’t on-board with his steadily-growing coif either, which is getting dangerously close to the point the Louisiana native will enter the cage with a samurai top-knot someday. “I told people that I wasn't going to cut the top of my hair until I got a submission in the UFC. I have zero intention of submitting anyone. I am going to punch and kick people to death as long as I'm standing there.”

That’s the “Hype or Die” Barry that UFC fans know and love. Thus far in 2012, the former K-1 kickboxer turned UFC knockout artist has split the difference in two Octagon appearances by stopping Christian Morecraft in January and getting stopped by Lavar Johnson in May, both in the first round. The former tangle earned Barry and Morecraft Fight of the Night bonuses and the latter earned Johnson a Knockout of the Night bonus. One cannot deny the entertainment factor Barry brings to his bouts, whether he’s helping or hurting his overall 7-5 record. Every one of his scraps possesses a raw, highly-contagious excitement like Barry’s own personality because he fights for finishes.

Up next is a probable striker’s showdown on December 15th with the former WBC Muay Thai world heavyweight champion Shane Del Rosario at The Ultimate Fighter 16 Finale. The 29-year-old California native and Team Oyama product went 11-0, including six wins in Strikeforce, before suffering his first loss in his organization debut at UFC 146 to the elbows of Stipe Miocic. While primarily a standup fighter, with eight victories via KO/TKO, Del Rosario has three impressive opening round submission wins like the armbar of the previously mentioned Johnson and the unusual omoplata on Brandon Cash. It’s a surefire fan favorite fight with Barry and Del Rosario having 24 bouts between the two of them and only one decision.

“Stylistically, I think this is a great matchup,” explains Barry. “If you didn't know anything about Shane and you just watched the way he fights, you would think he was this young cat who fights at 145 pounds. He's very nimble, very light on his feet. He's got not-so-traditional striking, he's flashy. He's the kind of a guy who can make a move, you blink, and then you get hit with something you don't see coming. Besides that, his jiu-jitsu is really, really up-to-date. It's not your traditional move my knee here, put my knee here, put body pressure here jiu-jitsu. He's got the kind of jiu-jitsu that he's going to end up submitting you with something you can't name. He's extremely well-rounded everywhere. He's what MMA fighters are nowadays. He's not coming in one-sided like myself. I'm a dominant striker and everyone in the world knows that my ground game would be my weakness. He's coming in more complete.”

Compliments aside, Barry and Del Rosario are both well-known, well-regarded strikers, which led them both to the arctic outskirts of Minnesota for Team DeathClutch. While Barry was a member of former UFC heavyweight champion Brock Lesnar’s mysterious and almost mythical training team for much longer, Del Rosario was there for about a week at the beginning with a couple day overlap with Barry. Their shared time there is more anecdotal than anything, as originally all the talent brought in was simply to battle the man-beast Lesnar. “We were all there for Brock. So, we were in the same room and worked out a little bit once or twice, but other than that, nothing. We mostly just laughed, talked, and high fived each other.”

Sadly, Team DeathClutch is no more, but Barry stayed in the “Land of 10,000 Lakes” and trains full-time at Greg Nelson’s The Academy outside of Minneapolis. Besides Barry and Namajunas, Nelson has coached UFC stars like Lesnar, former UFC lightweight champion Sean Sherk, former UFC middleweight champion Dave Menne, Nik Lentz, and Jacob Volkmann. As for owner/head instructor himself, who Barry refers to as “Yoda”, Nelson is a world traveled and tested, certified top-tier instructor/practitioner in about any martial art with a name, including being awarded his first Brazilian jiu-jitsu black belt by the legendary Pedro Sauer.

“This dude is a high level black belt in everything,” affirms Barry. “There is nothing you can say about fighting that he hasn't experienced 30 times over. He knows everything when it comes to the fight game. He’s very well-respected and very world-renowned. Greg's mentality, his whole idea about fighting, is win. Win by any means necessary. He's got tricks up his sleeves galore. He is not teaching traditional jiu-jitsu for jiu-jitsu, he's not teaching wrestling for wrestlers - he's teaching fighting. He's teaching winning for fighting. He's beaten cancer three times and in the third time he supposedly beat it with his own hands. He just pulled it out and punched it. All around, Greg Nelson is a warrior.”

If that wasn’t enough, Barry spent a month in Denver, Colorado at the Grudge Training Center with Trevor Wittman and its talented roster of large cagefighting mammals like former interim UFC heavyweight champion Shane Carwin. It should come as no shock to the weekly TUF viewer, as Barry was recruited as a striking coach for Carwin’s team, and the training relationship continued off-camera. The allure of Grudge for Barry is twofold: the big bodies to battle against and Wittman’s standup expertise. While most time in the gym is spent on fixing the holes in one’s game, there’s always the need to upgrade one’s strengths as well.

“What he's doing is polishing me,” says Barry. “He's able to see things. Ever since I got into MMA, I've focused the majority of my time on wrestling and jiu-jitsu because it was my weakness. Since doing that, I've kind of neglected my striking. Trevor knows that. He says he sees it in all of my fights. He says, 'You're doing things that you're not training. You're doing things that you've never been taught that you've just known on your own, but you've never been shown why you do things you do.' It's not necessarily learning anything new. It's learning things that I've been doing, but I just didn't know why. He's fine-tuning.”

With Namajunas, Nelson, and Wittman helping in his evolution, Barry has also taken his strength and conditioning up to the nth degree at Horsepower. “Physically, I'm definitely coming in stronger,” states Barry, who was already working out there, but once he got word of the Del Rosario fight - he took it up a notch, maybe even 100 notches. “I don't know how useful it is going to be in the fight because this is my first fight with the strength and conditioning that I've been doing, but I've been seeing the benefits of what I've been doing visually and I can feel the difference when it comes to training.”

Win or lose, Barry’s bout will no doubt be a spectacle to remember. And when it’s done, “HD” can get back to his day job of helping his lady, Namajunas, on her title run in 2013.