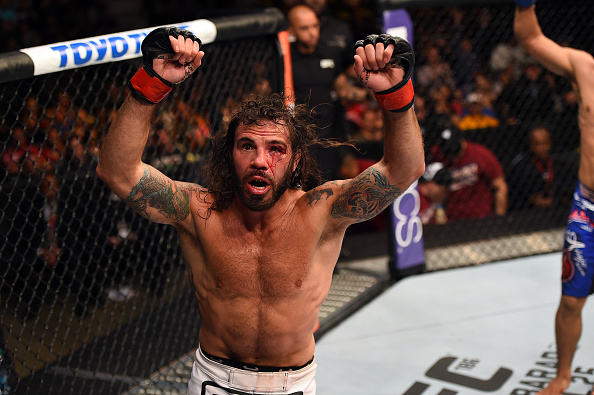 We won’t know for sure until fight night, but this Saturday, Clay Guida could possibly become the first American fighting a Brazilian to not get booed in Brazil. Stranger things have happened, but “The Carpenter” thinks it’s a possibility when he faces Thiago Tavares in Sao Paulo.

“I train with a lot of Brazilians, and I’ve been down there when Anderson Silva and Yushin Okami fought and it was a real cool time in Rio.”

At that UFC 134 card in 2011, Guida was embraced by the Brazilian fans who treated him like one of their own and chanted his name in the arena that night. There may be other chants when he takes on Florianopolis’ Tavares, but he’s “hoping that they’re consistent when I get down there and not chanting for my head.”

He laughs, knowing that love him or hate him before the fight begins, by the end of the night, Everybody Loves Guida. It’s why the featherweight veteran was able to split his camp for this fight between Team Alpha Male in Sacramento and Team Musclepharm in Denver. Normally, that would be no big deal, but when bantamweight champion TJ Dillashaw left Alpha Male for Colorado, there were some hard feelings, at least those that were expressed in the media. But Guida wasn’t – and isn’t – part of any of that. He’s just being a good teammate in both spots as he got ready for his second fight of 2015.

“I’m enjoying both places,” he said. “I’ve been doing the California and the Colorado combination, still getting the best of both worlds. I’m working out with those crazy maniacs at Ultimate Fitness, and it’s great. You get awesome wrestling, great striking, power punching, and then I came out here (Denver) to get some altitude training, and it’s a very good camp out here as well. It’s a circle of learning. Everyone has something to offer, and I want to be part of that.”

And Everybody Loves Guida, right?

“I like to think that, even though I don’t believe it’s true all the time,” he laughs.

If it’s not, it should be, as the 33-year-old has always been one of the good guys of the game, a product of a Midwest upbringing that doesn’t just translate to his affable personality, but to a fighting style that is as gritty as they come.

“That’s the grinder, that’s the wrestling, and that’s where I was brought up in the Midwest, learning that hard-nosed, in your face, make the wrestling match ugly style,” the Round Lake, Illinois native said. “That’s what we did in the last fight (an April win over Robbie Peralta), and that’s what you’re going to see. We’re back to that. Nothing pretty. We’ve added a couple of things and I’ve gotten rid of a couple of things in my fighting style, and we’re going back to nothing pretty but hair in your face and punches in your face and putting you on your back. That’s what people like, that’s what helped me be victorious and get on top of these guys and get me toward the top of the lightweight division, and I believe it will be the same thing that can get me into title contention in the 145-pound division.”

So even in the ultra-cool Bay Area or the beautiful mountains of Colorado, Guida will always be an Illinois kid at heart.

“That’s something that will never leave me,” he said. “I wouldn’t say it defines me, but that’s what I’ve been brought up around. Just hard working people. My dad, mom, my family, my wrestling coaches and my teammates, that’s what I was taught. It’s been instilled for years and we learn from those that come before us, and you try to carry that torch and just pass it on to others. Don’t get me wrong, it would be easy to get distracted by going out and doing fun things, but I do that in my off time. Being at 145, it’s a total life change for me for camp. I’m buckled down and it’s pretty much diet, train, diet, train.”

That will make anyone a little mean come Saturday night of fight week, and Guida has his game face on as the bout with Tavares approaches. On paper, this is a scrap between two veterans that have combined for ten Fight of the Night awards over their years in the lightweight and featherweight divisions, and while they’ve never met before, Guida believes this was a fight that was destined to happen.

“We were on a crash course to eventually face each other,” he said. “I remember when he came in and fought Tyson Griffin right after I fought Tyson Griffin. I was pumped – I said I can’t wait to get in there with this guy. He throws haymakers, he gets down and dirty, he likes to get on the ground and use his jiu-jitsu and wrestling. He’s a hard-nosed dude, but I’ve see the wind in his sails go out the window quite quickly in some fights. I’ve seen his weaknesses and I’m really looking forward to exposing them, especially on his own turf.”

Those words could produce some boos from the Brazilian fans, but Guida’s willing to take them as long as he gets the win and ends the year with a 2-0 record. Then it’s off to 2016 and what he hopes will be the Year of the Carpenter.

“Two fights is all right, but I’d like to get back in the old swing of things of getting three fights a year,” he said. “I want to finish on a strong note in 2015 and just come out with a bang in 2016 and really let people know that I’m here to stay. I’m not going anywhere.”