"I feel like Varner and I are probably fighting for our jobs in this fight." - James Krause

Battling up the ranks in mixed martial arts is a difficult process in itself, and carving out a place on the UFC roster is a goal every fighter strives to make good on. Accomplishing this task is certainly easier said than done, and the situation becomes even more complex when the unstable nature of that position is taken into account. Fighters can reach the sport’s biggest stage on the strength of a solid run on the regional circuit and then find themselves once again on the outside looking in with a few poor performances.

James Krause knows just how unpredictable the fight game can be and he’s determined to make his mark on the UFC lightweight division. The 27-year-old Kansas City-based fighter has been a nightmare to the opposition when competing on smaller stages across the MMA landscape, but seemed to struggle when the lights above the cage got brighter, which can be an element of the learning process for a young fighter on the come up.

Traveling that road comes equipped with challenges that are unique to the environment and Krause believes those people watching from home or in the stands - in some cases even the fighters themselves - are truly unaware of how difficult the journey is.

“People have no idea about what it takes just to get here,” Krause said. “Even some fighters have no clue, to be honest with you. I don’t know how to explain it any other way than you are training and working so hard for something that isn’t even guaranteed. A lot of people work hard toward their goals but this one is unique. If I went to school and was working toward a degree, all the hard work being put in would be built toward the payoff where you get that degree and a good job because of it.

That said, no matter how things ultimately have shaken out in the win or loss column, the Grindhouse MMA-trained fighter has never wavered in the scrappiness department.

Regardless of what promotional banner he has competed under, Krause has always shown up to 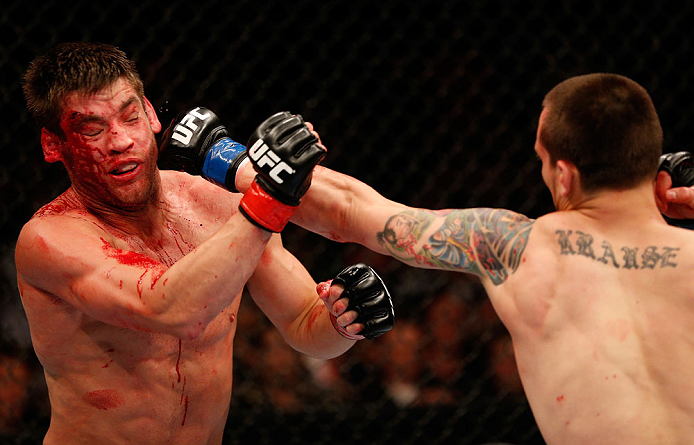 entertain and that willingness to throw down earned him a reputation for being game and tenacious when the cage door closes.

“I fight for the fans,” Krause said. “I want to come out and give them a show. I’ve said it a million times but I would rather come out on the losing end of a war then win a boring decision. I know that is probably not the best way to look at things but that is how I feel. I want to be the guy that brings something different.”

Those skills were put on display when he picked apart savvy veteran Sam Stout at UFC 161 last June. The bout marked Krause’s official UFC debut and he capped off the biggest opportunity of his career with a “Fight of the Night” worthy performance and a submission victory over one of the longest standing 155-pound fighters on the UFC roster. His performance and win over the Canadian veteran was an introduction long overdue in the eyes of many in the MMA community and it put Krause in a position to hit the divisional ladder with some solid momentum.

“That fight was incredible,” Krause said. “It was as if everything I’ve trained for and worked hard for came to a point. I’m not just talking about training camp; I’m talking about my career in general. I have trained so long and worked so hard to get to that point and it finally, finally, finally happened. I finally reached my potential where I knew without a doubt I was doing the things I should be doing. I’m finally where I should be and making the impact I always knew I could.”

Things would take an awkward turn in his next showing when he squared off with Bobby Green at Fight for the Troops 3 in Kentucky. The Strikeforce veteran blasted the Virginia native with two illegal blows below the belt that resulted in referee John McCarthy deducting a point from Green for the strikes. Shortly after the action resumed, Green threw another kick toward Krause’s midsection that appeared to once again land below the beltline. Upon impact, Krause dropped to the canvas, but since McCarthy deemed the kick to be legal, he waved off the fight and awarded Green the TKO victory.

While Krause has since moved on from how the tilt in Fort Campbell concluded, he isn’t willing to alter what he knows about what really happened inside the Octagon.

“I’m not going to sit here and play the excuse and ‘poor me’ game,” Krause said. “At the end of the day Bobby Green came out the victor and I have a loss on my record. That is what I’m faced with right now. I’m coming into my next fight after taking a loss in my last one. People can think what they want about what happened in that fight and I’m not going to defend myself to the death. I know what happened and it’s pretty apparent if you watch your TV and turn up the volume. It doesn’t take a lot to figure it out but it is what it is.

“There are always going to be people that doubt and hate on you and that’s fine with me. I’ve had that all my life and it’s no big deal to me. But the reality of the situation is that Bobby Green was the winner, I’m the loser and I’m coming into my fight with Jamie Varner coming off a loss. That’s the reality I’m dealing with now and it’s pointless for me to waste my breath doing anything else.” 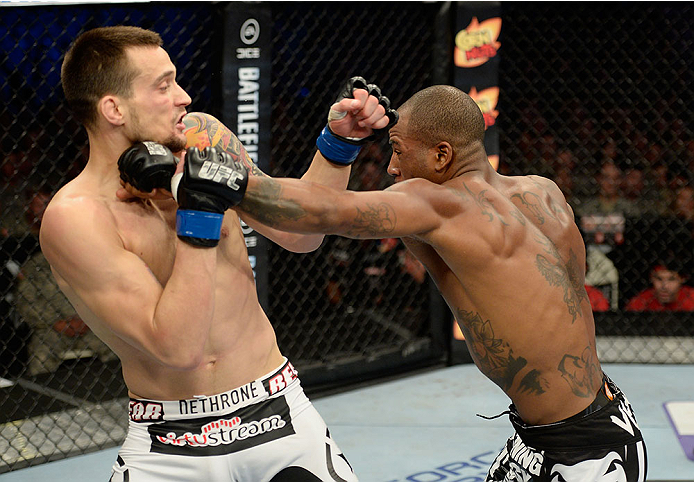 Although his loss against Green cooled off the momentum he built in his debut, Krause has his sights set on getting it back in a big way in his next outing. The chance to do so will come against former WEC champion Jamie Varner this Saturday at UFC 173 in a bout that will kick off the pay-per-view portion of the organization’s annual Memorial Day card.

The matchup will feature two fighters who have shown an absolute willingness to get after it once the referee steps aside and Krause believes the clash of their respective styles has the potential to be a scrap fight fans won’t want to miss.

“I’m excited about this fight and the matchup,” Krause said. “I think the fans win in this situation. I really like what the UFC is doing with me. They either hate me and want to get me out of here or they love my style and the way I fight and they are trying to make exciting fights. I hope it’s the latter of the two because that is what I’m here for.

“I think my style can absolutely frustrate him. That’s my game. That’s what I do. Whether I can throw him off with my style and frustrate him will most likely determine who wins the fight. I think I’m good at what I do. He has big power, likes to throw that overhand right, and he has good boxing. I also think I offer some serious threats to him. He’s going to fight me and he presents plenty of threats to me as well. It is one of those fights that will be determined by who has the stronger will and who comes out with the better game plan.”

While Krause has only suffered one setback under the UFC banner, the lightweight division is a highly competitive collective and there is never much room for error. Krause is aware of the pressure circulating above him going into UFC 173 and he is sure his opponent is feeling it as well. Despite the Arizona-based fighter shocking Edson Barboza in his return at UFC 146 in 2012, he’s managed to find victory in only one of his four showings since.

Those particular details paint a picture where the fighter who comes up short in their scrap this Saturday could very well be out of a job and Krause has no intention of going anywhere but up in the ranks of the 155-pound division.

“I feel like Varner and I are probably fighting for our jobs in this fight,” Krause said. “I definitely think that is the case for him and I’m not really sure where I stand in that department. But I’m looking at this fight like my job is absolutely on the line and I need to go out and get the win. I don’t think a loss here would be a step back, I think there is a whole lot more on the line. We both know that and it will make this fight even that much more interesting.”