Even at 36, Guida never lets foot off the gas pedal 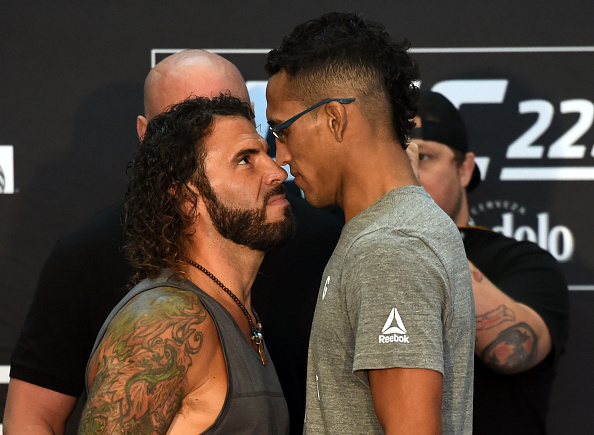 Clay Guida and Charles Oliveira of Brazil face off during the UFC 225 Ultimate Media Day at the United Center on June 7, 2018 in Chicago, Illinois. (Photo by Josh Hedges/Zuffa LLC/Zuffa LLC via Getty Images)" align="center" />
At 36 years old and after 48 pro fights – 25 of them in the UFC – Clay Guida should be slowing down. Yet after impressive back-to-back wins over Erik Koch and Joe Lauzon in his return to the lightweight division, “The Carpenter” is showing prime form.

So what’s the secret? According to Guida, there isn’t one, only a commitment to a philosophy that he’s never strayed from.

“It’s never letting your foot off the gas pedal,” he said. “I put my entire body on that gas pedal and we’re going 150 miles an hour in this journey. I’m having more fun every time I start a training camp and get a new opponent. And working with the wrestlers and coaching wrestling, it keeps me young being able to pass on the knowledge that I’ve learned and have been so fortunate to have gained from so many great coaches, instructors, trainers, teammates, heroes of mine in the sport and other sports. Being able to pass that on, it keeps me young.”

That may be part of it, but in my opinion, it’s not the only reason. Years ago, Guida revealed to me that he was the worst gym fighter in the game. I remind him of this.

We laugh, but my premise is that so many of Guida’s peers want to be the best fighter in the gym. They have to win every sparring session and they’re willing to go to war to achieve that goal. On the other hand, Guida shows up to practice to do just that – practice. He’s learning and looking to get better, and he’s not interested in having fights in the gym because hey, you don’t get paid for those.

“I’m there to improve,” Guida said of his training philosophy. “I’m there to work on my game plan and fight strategy in the gym. There’s no payday in the gym. The payday comes fight night. So all the hard work is done in the gym, and as long as I can get one percent better every day, that’s gonna transfer come fight night and people are gonna see the finished product. It’s having fun and knowing when it’s time to turn it on. And my mind and my body go into fight mode when we’re behind that black curtain. The second we step out of that locker room, it’s terminator mode. There’s a switch that flips and we lay on that thing until the referee pulls us off.”

The first half of that response will extend Guida’s career. The second half has endeared the pride of Johnsburg, Illinois to fight fans around the world and will have them roaring when he steps into the United Center in Chicago to face Charles Oliveira on Saturday. And that admiration society is mutual.

“I do it for the fans,” he said. “It’s more fun to be an entertainer. I put on an event; I don’t just go out and fight. When people come to watch me, they’re paying for an event, so they’re getting that and so much more. Their hard-earned money pays my bills and I’m so thankful and grateful for them and this career, this life that they helped provide me and my family.”

Put it all together and it makes Saturday’s bout a perfect storm for Guida, a diehard Chicago sports fan getting to fight in a place with a lot of history in it for the first time since a win over Hatsu Hioki in 2013.

“I’m back at the weight class I belong in, and it’s gonna be a sweet homecoming in sweet home Chicago,” he said. “I get to strap ‘em up again in the house that Michael Jordan built, where the dynasty of the Chicago Bulls took place, the world champion Chicago Blackhawks. So much was accomplished in the United Center, and I’m very fortunate and very lucky to be able to compete at such a world famous venue in front of my home crowd, in front of family and friends, in front of all those people that were there years ago when I started on this journey.”

On that journey, Guida made his bones fighting everywhere and anywhere, and he hasn’t forgotten those days or those that were there for them.

“Whether they believed in me or they didn’t, they saw me in the bowling alleys, the VFW halls, the bingo halls, the banquet facilities, all those little dingy, fun regional promotions in the Midwest, so it’s really gonna be something special to have them all there and I’m gonna put on a show for them.”

And with that type of incentive and the experience to back it all up, Guida wasn’t bothered at all by the late switch in opponents from Bobby Green to Oliveira. He’s got a job to do and a show to deliver, and it doesn’t matter who is on the other side of the Octagon.

“New opponent, same result, same mindset – victory,” Guida said. “That’s all I envision. I don’t care if King Kong Bundy’s in front of me, I don’t care if the Iron Sheik’s in front of me, or The Undertaker, I’m coming after him a thousand miles an hour. Oliveira’s quite different from Bobby Green, but we’re gonna go out there and make an example of this guy taking a short notice fight. He’s coming into the hornet’s nest, he really is, and I’m not gonna have any mercy on him. I’ll shake his hand, I’ll pick him up after the fight after I finish him and I’ll tell him thank you for coming to Chicago, but this is our night, this is our arena, this our stage and this is our fight.”