Evans-Smith gets back to winning ways in Pittsburgh

Back in the Octagon for the first time since December of 2014, Ashlee Evans-Smith made the wait worth it Sunday evening, as she scored a three-round split decision win over top 15-ranked Marion Reneau in UFC Fight Night prelim action at Consol Energy Center in Pittsburgh.

Evans-Smith was the busier of the two as the fight began, her striking game working effectively. But a little over two minutes in, Reneau began a flurrying sequence reminiscent of Vitor Belfort’s win over Wanderlei Silva, with a final right hand landing and sending Evans-Smith into the fence. Evans-Smith covered up and cleared the cobwebs, resuming her early strategy on the feet as she kept Reneau at bay. Reneau shot back into action in the final seconds, nearly finishing matters with a guillotine choke before the horn sounded.

The second round settled into a more sedate pace, with Reneau controlling matters from the outside with her striking as Evans-Smith surprisingly opted not to implement her wrestling game.

In the second minute of the third, Evans-Smith caught a Reneau kick and put her on the mat. But a brief hesitation prompted referee James Chappell to restart the action on the feet. Evans-Smith stayed busy though, intent on leaving an impact on the judges’ scorecards. 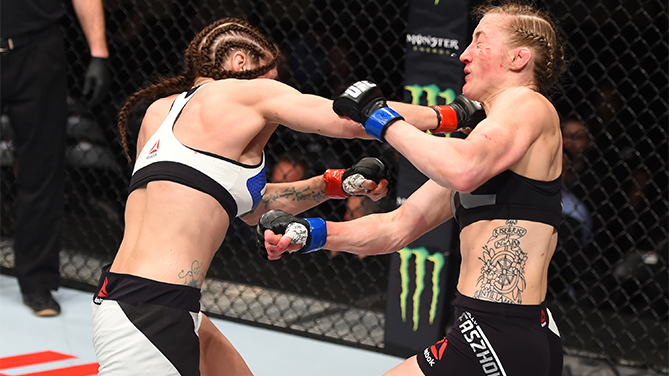 After two controversial decision losses in her first two UFC bouts, bantamweight Lauren Murphy took it out of the judges’ hands the third time around, holding off a spirited effort from late replacement Kelly Faszholz to win by third-round TKO.

Known for her ground game, Faszholz instead showed off her hands in the early going, landing several hard combinations and ever scoring a flash knockdown. Murphy got in her share of shots, bloodying the Santa Rosa product’s nose, and as the round progressed, she began to take over, with her right hand being her most effective weapon.

Murphy (9-2) chased after Faszholz (3-1) aggressively to begin round two, but Fasholz’ counterpunches were on target throughout the second frame. Add in a takedown in the final seconds, and it was a strong round for the newcomer.

Opening the third round with a takedown, Murphy looked to implement her ground game in the final frame, and she did just that, getting the mount in the final minute, where she rained down a series of punches and forearms until referee Bill Bookwalter intervened at the 4:55 mark.

Faszholz, who took the bout on a little over a week’s notice, replaced the injured Sarah Moras. 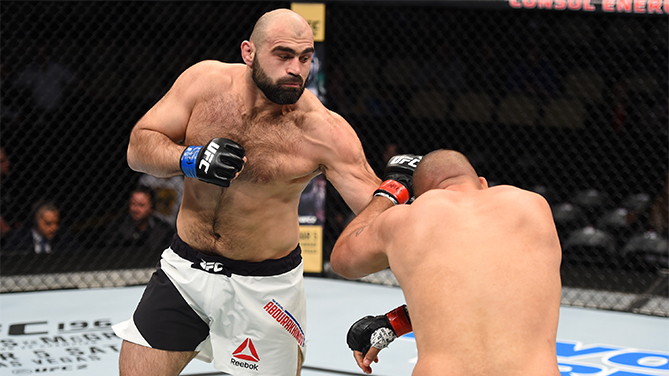 Abdurakhimov got off to a strong start, using in and out movement to land with his strikes and toss off any takedown and clinch attempts from Hamilton in the opening round. Matters didn’t get much better in round two for the “Freight Train,” as the relaxed Abdurakhimov kept dominating the action.

Early in round three, Hamilton saw some light when an accidental clash of heads bloodied Abdurakhimov on his forehead as he pushed the action in an attempt to salvage the fight, and now the Dagestan native had to deal with his first adversity of the bout. But deal with it he did, returning the favor by bloodying Hamilton’s mouth before he held off the late surge and secured his victory.