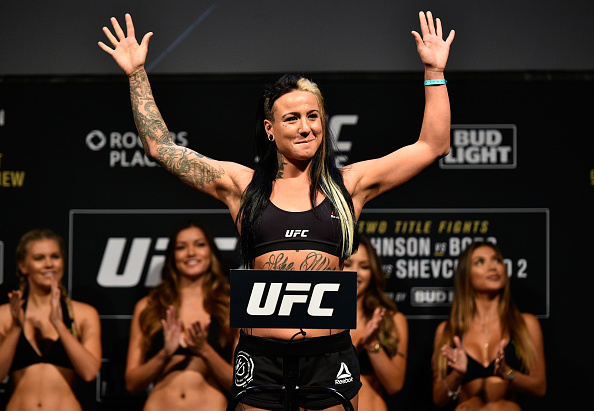 Ashlee Evans-Smith poses on the scale during the UFC 215 weigh-in inside the Rogers Place on September 8, 2017 in Edmonton, Alberta, Canada. (Photo by Jeff Bottari/Zuffa LLC/Zuffa LLC via Getty Images)" align="center" />
If commentators describe Ashlee Evans-Smith as a “different” fighter when she steps into the Octagon to face Bec Rawlings in Brooklyn on April 7, they will have no idea just how right they are.

Sure, there are the obvious things: the tweaks made in a fight camp for a specific opponent and the move from bantamweight to flyweight. But perhaps the greatest change in “Rebel Girl” since her September 2017 loss to Sarah Moras and the subsequent rehab for the arm injured in the finish to that bout is that she got back to her roots - not in fighting, but in journalism, as she created a YouTube channel that features Evans-Smith on the other side of the microphone.

“I had been thinking about starting a YouTube channel, but I was very shy about it,” said the Menlo College graduate. “So I thought, ‘What if I put the microphone in front of somebody else?’”

The result has been an eclectic mix of musicians, comedians and, of course, her fellow fighters, and it’s a return to a field that she thought was closed forever after college.

“I graduated back in ’09 and I wanted to be an investigative journalist,” said Evans-Smith, who was the editor of her school’s paper as a junior and senior. “I wanted to write hard-hitting stories about things that really mattered, but I ended up bartending right out of college because it was during the recession, it was in Silicon Valley, and I just couldn’t make ends meet. I couldn’t even get an internship in the Bay Area. And, by the way, nobody told me that print journalism was not the way to go.”

She laughs, feeling the pain of print journalists around the globe. With that door closed, one to fighting opened, but when she started training, women weren’t even in the UFC. That would change thanks to Ronda Rousey, and by the time Evans-Smith turned pro with a win over Tori Adams in March 2013, she had something to shoot for.

“I just got lucky that something that I loved to do ended up being lucrative,” she said. “So I followed my heart and here I am fighting in the UFC.”

In December 2014, Evans-Smith made her Octagon debut against Raquel Pennington, and while she lost that bout, she went 2-2 in her next four, with wins over Marion Reneau and Veronica Macedo. But the two losses to Ketlen Vieira and Moras both came in 2017, leaving her in a tough spot to sit in as she rehabbed her injury.

Enter her new media endeavor, one she hopes to pursue full-time once she’s finished fighting.

“If I could get a job post-fight career interviewing, whether it’s on camera or off, that would be my next dream job besides the one I’m doing now,” said Evans-Smith, who has found a way for this to enhance her fighting gig. She cites research that saw her picking up helpful hints from UFC Hall of Famer Pat Miletich when he was on the Joe Rogan Podcast, as well as a recent tour of Iraq with fellow fighters Diego Sanchez, Tom Lawlor and Dennis Bermudez that saw her sharing stories of life in the fight game.

“We fighters go through so much and sometimes we feel so alone in all this, but it’s the same for all of us,” she said. “We’re all fighting for money and the love of the sport and for our families and our name, so I take a lot away from the interviews and that’s why I’ve really fallen in love with it.”

She has also gained a greater appreciation for the craft of interviewing, and is not shy when it comes to revealing the questions her interviewers should stay away from.

“There’s a couple of them,” she laughs. “One is ‘How is the weight cut going?’ Let’s just say it’s going bad; they’re not gonna be like, ‘Man, I’m really hurting, I don’t know if I’m even going to make weight.’ They’re not gonna say that. And if it’s going good, they’re gonna be like, ‘It’s going great.’ So you’re gonna get the same answer every time unless you get a real character. That’s a silly question, and then there’s, ‘Oh, can you tell us your game plan?’ Of course I can’t tell you the game plan.”

What she can tell is her reason for moving to the flyweight division.

“I actually ended up doing better on my diet while I was injured after that fight than I usually do, even during fight camp,” she said. “I started waking up and walking around at the lightest I ever have. So I started thinking that I should challenge myself, and if I do it the right way, with a nutritionist in a healthy way, why not? So I made that decision.”

And being a standout in a new division where the top could be just a few wins away didn’t hurt in the decision making process either.

“It was an accumulation of different factors, and that was one of them,” Evans-Smith said. “The division was open and people kept asking me, but I looked at the division, I watched the title fight and I said, ‘I may not be world champion, but I can be world champion one day.’ And it might not be my next two fights, but that division is definitely open.”

She doesn’t rule out a return to bantamweight either. But for now, it’s April 7, Bec Rawlings, and a fresh start for Ashlee Evans-Smith.

“I still believe in myself in the 135-pound division, and I think that the day you stop believing you can be champion is the day that you should stop fighting,” she said. “But right now I’m feeling fast, I’m feeling light and I think it’s really gonna pay off in the fight.”