For Evans, It's Still All About the Title

"There’s nothing like those 24 hours before the fight, where the biggest opponent is yourself." - Rashad Evans 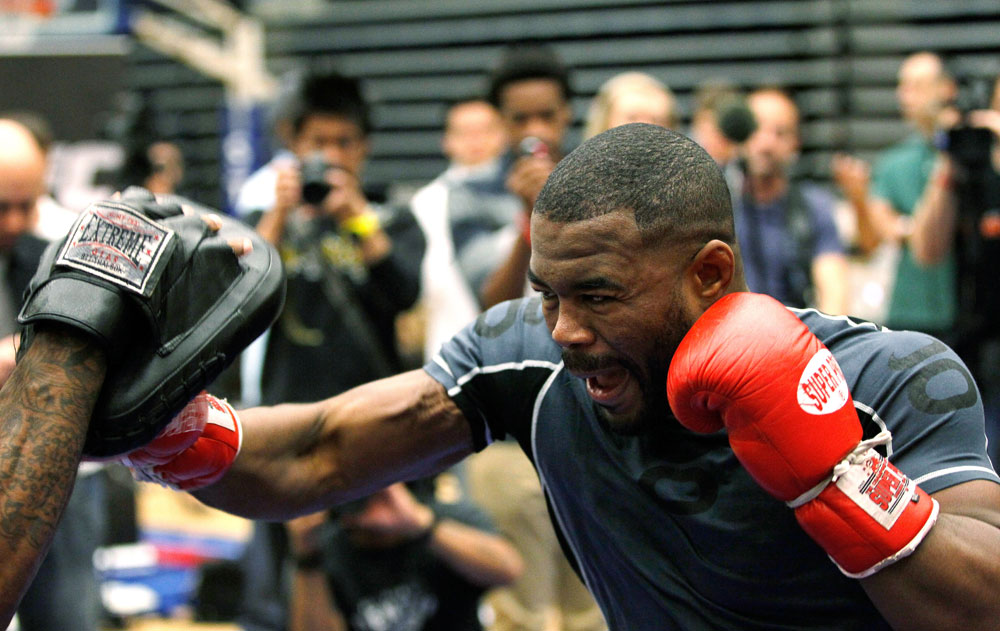 It wouldn’t be accurate to say Rashad Evans was miffed when the topic of his fighting legacy was brought up, but the former UFC light heavyweight champion was quick to point out that when you start talking about things like that, your foot may as well be halfway out the door, and “Suga” isn’t ready to leave just yet.

“The title’s still a focus for me,” he said. “When it comes down to it, my resume will speak for itself, but now, I just want to focus on climbing that ladder one more time, getting a chance to fight for the belt, and getting it back. I’m only 33 years old, I’m still young and have my best years ahead of me, so I don’t feel there’s a need for me right now for me to start looking at my legacy and what I’ve done because once you do that, I feel like you’re done as a fighter, and I’m not done yet. I don’t want to start reading my press clippings until it’s all said and done, and I can sit back with my kids or my grandchildren and be like ‘look at everything that I’ve done.’ But right now is not the time for that for me.”

Fair enough, but before we move forward, a glance at the former Michigan State University wrestler’s UFC resume is in order. And it’s a more than impressive one. The Ultimate Fighter season two winner (at heavyweight no less), a UFC light heavyweight title, wins over two Hall of Famers (Tito Ortiz and Chuck Liddell), and victories over former champs (Rampage Jackson and Forrest Griffin), longtime contenders (Michael Bisping, Stephan Bonnar), and promising up and comers (Phil Davis).

But after a unanimous decision loss to current 205-pound champion Jon Jones last April, Evans’ quest to regain his title needed a break. So he took one.

“Having a break provided me with some time to handle some personal issues as well as let my body heal up,” said Evans, a nine year pro. “I did the Phil Davis and Jon Jones fights back to back (both five rounders), and the Jon Jones fight took a lot out of me mentally and physically speaking, so I needed a break to kinda recalibrate myself.”

Watching him against Jones in their highly-anticipated grudge match, it was clear that it wasn’t the usual Rashad Evans in the Octagon. Maybe it was Jones’ unorthodox style or Evans just being unable to pull the trigger against his former training partner, but the bottom line was that the speed, power, wrestling, and striking of the Niagara Falls native just wasn’t there that night in Atlanta.

“I just didn’t fight the way that I could have fought,” said Evans. “My training wasn’t what it should have been and in the first couple of rounds I felt pretty good, but then I started to get a little bit tired. I wasn’t able to have my training partner Tyrone Spong there for most of the camp because he had visa issues, so that kinda messed me up a little bit as far as my training and sparring was concerned, but sometimes you just have those nights where it’s not your night. Jon Jones is a great competitor and he’s hard to compete against if you’re having a good night, so if you’re having a bad night, it makes it that much worse.”

Ten months later, Evans is back, facing Rogerio Nogueira in the co-main event of UFC 156 in Las Vegas this Saturday. It’s not a fight that will earn him a rematch with Jones if he wins, but it is a fight that will propel him forward and keep his championship dream alive with a victory. He’s not looking at things that way though. In his mind, to climb the mountain once more, he’s got to approach the whole fight game differently.

“It does get hard to climb the mountain again,” he said. “You’ve got to reinvent yourself and come back different than you did last time, and that takes a little bit of time to do. It’s sort of frustrating too. You climb the mountain and think that you’ve got it, and then when you get there, you’re not where you need to be or want to be. So next time, I just think I’m not gonna worry so much about getting a title fight. I’m just gonna fight, and then we’ll see what that adds up to. I think too much of my focus was trying to worry about ‘okay, this is the fight that’s gonna get me a title fight,’ instead of just going out there and fighting.”

It’s a good approach and one that will come in handy this weekend because, at the very least, Nogueira will give him a fight.

“One thing you recognize and you know is that the guy is a gamer,” said Evans of his foe. “He shows up to fight, and you’ve got to respect that. And that’s one thing I always like to see, those guys who once it’s time to fight, they come and they’re ready to fight.”

Rashad Evans has always been one of those guys, and on Saturday he plans on reintroducing himself to the UFC faithful at the Mandalay Bay Events Center. It’s a process he’s missed.

“I miss the personal growth I get each time it’s time to fight,” he said. “Each time you fight, there’s a different part of yourself that’s challenged, mentally as well as physically, but more mentally and spiritually, and that where I feel I miss and need the growth more than anything. There’s nothing like those 24 hours before the fight, where the biggest opponent is yourself. That’s what I miss, I miss facing myself.”