"At the end of the day, I know what the fans want to see; they want to see a good fight and I think I deliver that." - Evan Dunham 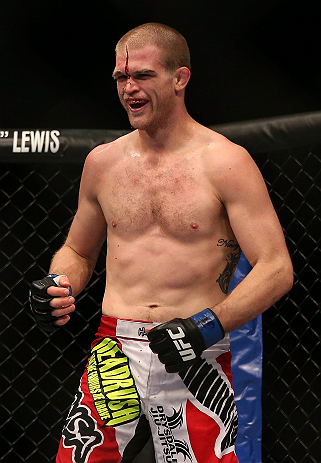 It’s a telling part of every Evan Dunham fight, usually accompanied by some blood on his face and a few punches from a fellow lightweight contender. For a moment, you can detect a smile or see a call to his opponent to bring it on. Such a public show of emotion is so out of character for the low-key Oregon native that you have to wonder where it all comes from.

“It’s probably the whole buildup of the week,” said Dunham, who returns to the Octagon this Saturday to face Rafael dos Anjos in a UFC on FX 8 main card bout. “I’m starting to change my mentality a little bit, getting more focused, and then when I finally do get in there, it usually takes me taking a shot or two to finally wake me up. (Laughs) But when you’re in there and fighting, it’s the purest feeling that you can get.”

And it’s something enjoyable to see from outside the Octagon because you’re not watching someone going through the motions, but a fighter in his element, fighting to win, and embracing the moment. It’s why Dunham – win or lose - has become must see viewing for fight fans, and usually, he’s the one leaving with his hand raised, even if he can make things tougher than they need to be for himself.

“I really enjoy the battle, which I think sometimes works against me because I like the fight so much that it takes me to places in the fight that I don’t necessarily have to go to,” he said. “But I don’t have any regrets when it comes to that sort of stuff. I go out there and I have fun. When I was younger, my dad told me to find something you love to do and do it. I love those battles, so that’s what I do; I go in there and I battle.”

Since 2009, Dunham’s battles with Efrain Escudero, Sean Sherk, Nik Lentz, and TJ Grant have earned him post-fight bonus checks and the respect of fans and his peers, with the only thing eluding him being a shot at the 155-pound crown.

“I do have three losses in the UFC, but I think only one decisive loss, so I’m always right there on the cusp and a fight or two away from being able to get that title shot,” said Dunham, whose 2011 knockout loss to Melvin Guillard was the decisive defeat, with his setbacks against Sherk and Grant coming via close decision. “I just stay positive and keep doing what I’m doing, building experience, and I know I’ll get that shot eventually. It’s just a matter of time.”

Seeing Grant parlay his win over Dunham and a subsequent knockout of Matt Wiman into a title elimination bout against Gray Maynard next week had to be encouraging, as both are almost mirror images as fighters and personalities. In short, they’re talented blue collar athletes who prefer to let their fighting do the talking, so if Grant can get to a position where he’s one win away from a title bout without trash talk wars and Twitter battles, there’s hope for Dunham too.

“You just gotta do you when it comes to the fights,” said Dunham. “You can’t really step out of the box and do something that doesn’t come natural to you because it’s just gonna come across fake, and people see that sort of stuff really easy. If I get into talking battles and that sort of stuff, it’s just gonna be unnatural and not seem right to me, and probably to the fans. At the end of the day, I know what the fans want to see; they want to see a good fight and I think I deliver that.”

That he does, and Saturday’s match with dos Anjos should continue in that vein. Winner of three straight, the underrated Brazilian could be getting into the title picture himself with a victory, and fighting at home for the first time since 2008 will be highly motivating as well. As for Dunham, who has competed in Canada, England, and the Philippines over the course of his six year pro career, that overseas experience is expected to serve him well this weekend.

“Fighting abroad before definitely helps out because it’s not a completely new situation for me,” he said. “Plus, I’m able to get out about a week early, so I have time to adjust and get my diet right and if the flight messes with my weight a bit then it gives me a couple extra days to get it where it needs to be. So I’m not anticipating too many problems with the travel aspect. But it (travel) is a big part of the fight. I know when I traveled to England (for UFC 95 in 2009) I wasn’t able to sleep for more than two hours every night until after weigh ins, and luckily I was able to get a really good sleep after weigh ins and come in fight day ready to go. But there are lots of different aspects that exist going into a fight, especially when you have to travel that far.”

Then again, if you know Evan Dunham, you’re well aware that when the Octagon door closes, nothing else matters.