Evan Dunham - In Search of Momentum 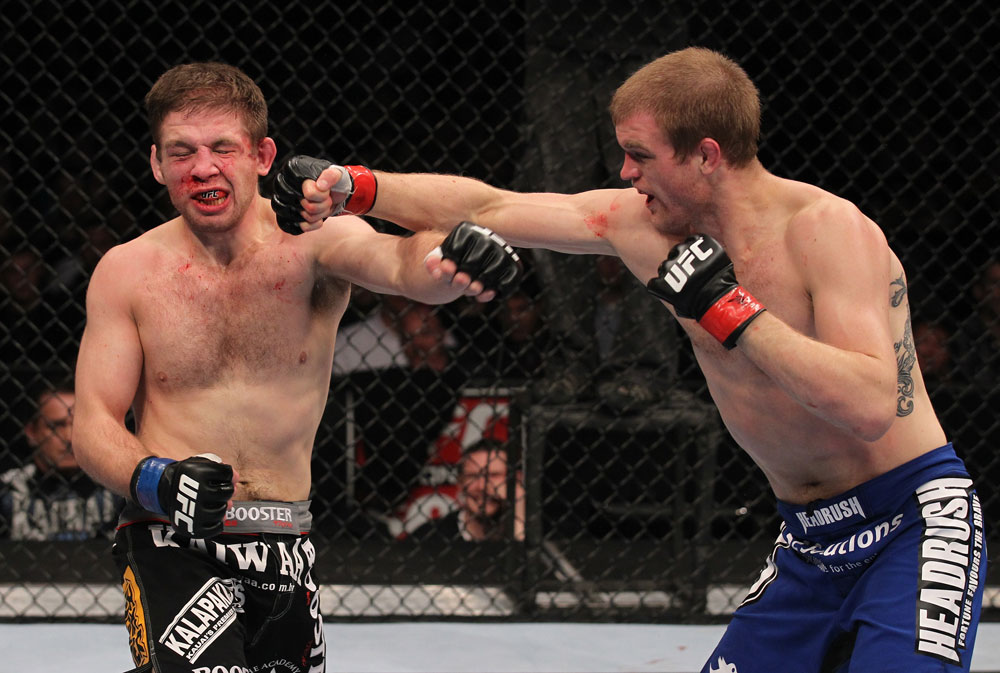 Momentum is a very important factor in any fighter’s career, but it doesn’t only come down to wins and losses. Though repeatedly having your hand raised is essential, so too is staying active, as a string of wins spread too far apart can press pause on a forward progress.

When you’re trying to make your way through the UFC lightweight division, both elements of momentum are crucial, as every event seems to produce another memorable battle and a new contender ready to join the long list of fighters already vying for a shot at Benson Henderson’s championship belt.

In a division as deep and talented as the 155-pound ranks, being active can at times trump wins and losses. A pair of solid wins can quickly erase the memory of a one-sided defeat, potentially elevating an active fighter on the rebound above one with the same number of consecutive victories who has been stuck on the sidelines for too long.

Such is life for Evan Dunham, the talented 30-year-old contender who has watched his progress up the UFC lightweight ladder move forward in fits and spurts thanks to untimely injuries.

Nine months after facing Melvin Guillard in the main event of the second UFC Fight for the Troops event at Fort Hood just outside of Killeen, Texas, Dunham returned from an injury to find himself competing on Facebook against former Ultimate Fighter contestant Shamar Bailey. One bout after entering the cage as a fringe contender, Dunham had been shuffled back into the middle of the lightweight deck.

After following up his decision victory over Bailey with a second-round stoppage win over Nik Lentz four months later, the 13-2 southpaw was paired with rising star Edson Barboza in a bout that would move the winner into the mix in the deep 155-pound ranks. But in May, veteran Jamie Varner shocked fans by halting Barboza’s unbeaten run, the former WEC champion a late replacement for the once again injured Dunham.

“It was a really tough thing to do,” said Dunham of the decision to withdraw from the bout with Barboza. “But it was one of those situations where I wasn’t going to be able to perform. It was frustrating, but having done it before made it – I won’t say easier, but with the first time it happened, it seemed like there was no end to it. This time, I knew I would be back, I knew that given time to heal, I would be healthy, and that when I was, I would get right back to it.”

Everyone has their own theories on why so many fighters have been falling out of bouts due to injuries this year; some believe it’s just a run of bad luck, while others wonder if the introduction of medical insurance has made it more palatable to pull out of a fight to treat an problem that might have previously gone overlooked. In Dunham’s opinion, it’s just another part of being a fighter.

“It’s just the nature of what we do and training with really tough guys. When you go in and bang it out with guys that are world-class guys every single day, injuries are going to happen. They’re a part of the sport, and unfortunately it happened again.

“It’s nothing specific that I think that I’m doing,” Dunham offered, unable to point to one area of his training routine that has been at fault for the bumps, bruises, and bigger injuries that have been accumulated along the way. “I’ve pulled back a little bit now just to give my body a little rest, but it’s just one of those things that it happens when you least expect it, and there is no way to plan against it.”

They also seem to happen at the worst time, at least in Dunham’s case. Four months after being matched with one of the top up-and-coming prospects in the division, the well-rounded Brazilian jiu-jitsu black belt is preparing to return to action against grizzly Canadian veteran TJ Grant at UFC 152 at the Air Canada Centre in Toronto, Ontario.

While getting back to business on a big card is a plus, squaring off with a lesser known, but no less of a challenge opponent like the 18-5 lightweight from Nova Scotia isn’t exactly the matchup Dunham was hoping to have in his return.

“I was definitely pushing for a more name guy,” admitted Dunham between training sessions last month. “(Donald) Cerrone and (Anthony) Pettis were two names that we were throwing out there and hoping to get, but that didn’t work out. When they told me TJ’s name, I jumped on it because I’ve never been one to turn down a fight, so if that’s who they want me to fight, that’s fine with me. He’s a very talented opponent. He’s got two good wins at 155 (pounds), and so it’s just one more person that I need to get out of my way to move up that ladder.

“You definitely want to go against name guys, but he’s very talented. He’s very good on the ground; he’s pretty good everywhere,” Dunham continued in his assessment of his matchup against the 28-year-old Canuck. “There is a little less pay out with it, but it is what it is. I’m going to go out there and fight my ass off – I’m sure he will too – and I’m going to come out the winner, and hopefully it will be a great fight that people enjoy.”

It’s hard to say where a third consecutive victory would put Dunham in the lightweight pecking order, in part because the division remains the busiest, most talent-rich collection of fighters in the UFC.

Fortunately for Dunham and his fellow 155-pound competitors, the congestion that has kept the division backed up for the last three years appears to have finally cleared. The chain of championship rematches has ended, with Nathan Diaz challenging Henderson for the title later this year, and as far as Dunham is concerned, all the other spots on the lightweight ladder are up for grabs.

“Our division was so jammed up for a while with the rematches and that stuff. It was hard for anybody – even if you were fighting all the time – to really move up the ladder because the ladder was already capped. We’ve already got the next matchup for the title – we know what that’s going to be – but after that, it’s anybody’s game, so this is a perfect opportunity to step up and show why you deserve that title shot.

“It’s always changing, and I think we’re kind of getting to a point where the guys that really deserve to get that shot are being noticed and getting that recognition,” added Dunham. “We’re at a time where there are going to be potential changes in the title, and more guys being able to fight for it. Rather than having one or two challengers in the span of two years, we’re going to have three or four, which is really good for our divisions.

As for what comes next if he’s able to extend his winning streak when he travels north of the border? All Dunham is looking for is a little momentum.