Eubanks finding inspiration from her daughter 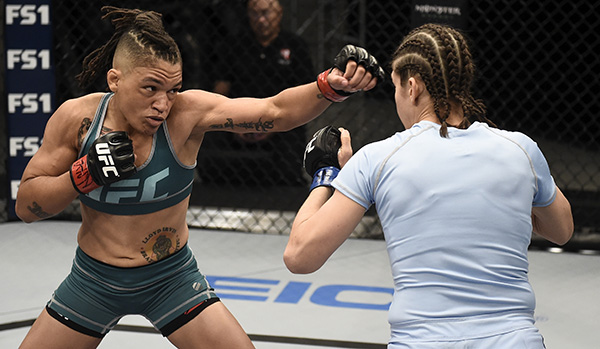 Part of the motivation for Sijara Eubanks auditioning for Season 26 of The Ultimate Fighter was her strong desire to not have to have an uncomfortable conversation with her daughter several years down the road.

“I would hate to look back and tell my daughter, ‘I was a professional fighter and I was a seven-time world jiu-jitsu champion and I had access to all this wonderful training, wonderful coaches and then you were born and I decided to be like, ‘never mind,’” chuckles the proud 32-year-old mom and one half of Friday’s championship main event to determine the inaugural UFC women’s flyweight titleholder. “I couldn’t stomach the thought, so it did give me an extra boost.

“She was four-weeks old when they announced TUF and I thought, ‘This is perfect.’ How can I sit up here and tell my kid The Ultimate Fighter trials came around and it was at ’25, not ’35 so I decided I’ll pass? Naw, man – you lose the extra 10 pounds and you tell your kid you did it.”

Having previously competed at bantamweight, shedding the additional 10 pounds to make the flyweight limit (and keeping it off between bouts) proved challenging for this year’s 12th seed, but Eubanks always managed to hit the mark on the scales, and when she stepped into the Octagon, “SarJ” proved that counting her out because of her low seeding and difficult path to the finals was a grave mistake.

After submitting fifth seed Maia Stevenson in the opening round of the competition, Eubanks knocked out perennial Invicta FC contender and fourth seed DeAnna Bennett with a perfectly placed head kick in the quarterfinals. She followed it up by beating top seed Roxanne Modafferi, completing her own upset-laden run to the finals, where she faces No. 14 seed Nicco Montano on Friday.

Both finalists traveled the toughest road possible to arrive opposite one another in Friday’s championship clash and Eubanks wouldn’t have had it any other way.

“Between the two of us we’ve taken out the Top 6,” says Eubanks, who dispatched numbers one, four and five, while Montano ousted numbers two, three and six en route to this weekend’s historic main event. “I think it’s exciting and true fans will recognize that’s the beauty of MMA – it’s whomever is the best that day.

“You know from the show that I had a little chip on my shoulder from being No. 12 – I felt that I should have gotten a more respectable ranking – but at the end of the day, your rank doesn’t matter. You’re going to have to fight three fights to get out of the house and your fourth fight to win the title, so I knew I was going to have four fights in front of me.

“When I did start to see the bracket fill out, I got excited because (1) I am going to prove I’m better than everyone in this house and this ranking is bad, but (2) because I was ranked so low, I get the experience of fighting the highest level of girls in the house and that’s what I wanted.

“Not only do I get to yell at (UFC President) Dana (White) and ask for bonus money because I finished the higher seeds, I get the experience of fighting well-rounded opponents and I think that was more beneficial to me than anything else in the house.”

Long before she got the benefit of sharing the cage with some of the top seeded competitors on this season of the long-running reality TV competition, Eubanks was able to gain invaluable knowledge about competing at the highest level in the sport by sharing the mats and studying the habits of the elite competitors who traveled through the doors at Team Lloyd Irvin.

Though she’s since moved on from training with the Maryland-based outfit, those hours spent alongside the likes of Phil Davis, Mike Easton, James Vick and Dominick Cruz helped the standout grappler understand the effort and sacrifice it would take not only to reach the UFC, but to excel on the biggest stage in the sport.

“You get to see first-hand what athletes so through to be in the UFC and be at the highest level of the UFC,” says Eubanks, who carried a 2-2 record into the TUF 26 competition. “A lot of people looked at my record and yeah, it’s four fights, but it’s also 10 years of dedication and hard work and training and repetitions and competition.

“Dominick Cruz was one of the best ever at 135 – he held it down for years and years and years coming out of the WEC – and just to get to pick his brain, see the thought processes he went through, the mental fortitude, the actual physical training that he did, the way he drilled, the way he carried himself, it was almost like practice; it was almost like training to be in that lifestyle. Now that it’s here, it’s like I trained, I did it before and I’ve just got to execute.”

Eubanks has been excellent in her execution throughout her run to the finals and if she’s able to replicate those efforts one more time, her Cinderella run to the championship finals of Season 26 of The Ultimate Fighter will have a happy ending – one that she’s envisioned countless times over and that words can’t do justice just quite yet.

“That’s the question I get asked the most and for me, it’s always the hardest one because it’s so difficult to put it into words; it’s hard to verbalize the feelings because I see it in my head all the time,” she replies when asked about winning the flyweight title. “I can close my eyes and feel the weight of the belt around my waist.

“I’ve practiced posing in the mirror with the belt and all that and it’s still overwhelming because when I first started martial arts, it was almost like a daydream, but then it became a goal. It’s almost like I went from being on this path, driving this rickety, broken-down ride trying to get to where I’m going and somebody hands me the keys to a Ferrari and puts me in the fast lane.”

She makes the sound of a car speeding off down the highway and chases it with a laugh.

“It’s all the adrenaline, hard work and goosebumps and sacrifices and long nights coming together in one beautiful moment,” she adds. “I can’t wait, man. It’s exciting.”