"Hopefully I’m gonna come back with a bang and let everyone know that
even though I’ve been out for a little bit of time, I’ve been working
hard on my game and I’m gonna get back up there.” - Terry Etim 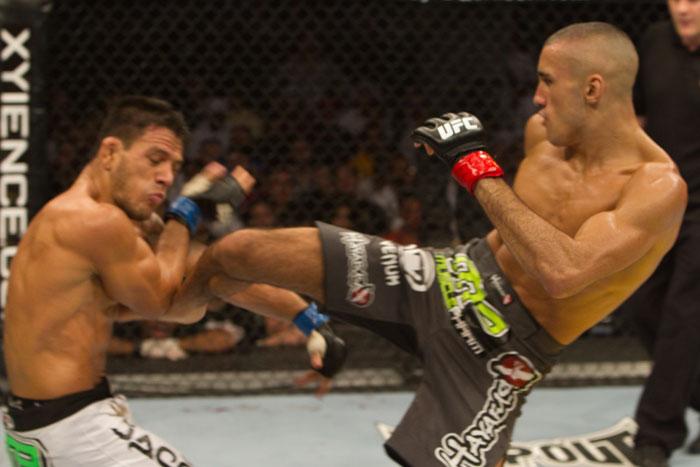 Heading into his April 2010 bout with Rafael dos Anjos, Liverpool lightweight Terry Etim was on the verge of stardom. 19 months later, he’s looking to reintroduce himself to the world.

That’s the nature of the fight game, especially in the fast-paced world of the UFC, which has put on 37 events since Etim last set foot in the Octagon. That’s enough time to see the heavyweight and light heavyweight titles change hands, for the WEC to import their lightweights, featherweights, and bantamweights into the UFC, and for legends such as Randy Couture, Mirko Cro Cop, and BJ Penn to announce their retirements.

“Obviously, fighting is my life, so having such a long time off has been very hard for me,” said Etim. “I’m just really glad to be back and I’m really excited for it.”

Etim returns to active duty this Saturday in Birmingham with a main card bout against Hawaii’s Edward Faaloloto. It’s his first bout since seeing a four fight winning streak snapped at UFC 112 by Rafael dos Anjos, and then being sidelined with various injuries since then. Losing to the Brazilian via second round submission and then seeing his career get put on hold following the bout was a momentum killer of epic proportions, but the 25-year old is looking at the positive side of things leading up to his comeback fight.

“Even though I’ve been away, as soon as my injuries healed themselves up, I’ve been training, and hopefully I’m gonna come back with a bang and let everyone know that even though I’ve been out for a little bit of time, I’ve been working hard on my game and I’m gonna get back up there,” said Etim, who looked to be ready to step into the rarefied air occupied by British stars Michael Bisping, Dan Hardy, and Ross Pearson before his layoff. And having to sit on a loss for that long made it even worse.

“I think that was one of the hardest things as well,” he said. “Before the dos Anjos fight, I was coming off four wins, so if I would have gotten injured then, it wouldn’t have been so bad because obviously you’re coming off wins.”

He pauses, referring back to the dos Anjos fight, which accounted for only his third loss in 17 pro fights, and first since a May 2008 decision loss to Rich Clementi.

“I think I’m the worst loser in the world,” said Etim. “I hate losing more than anything else. I hate it. Obviously after that loss, the only thing I wanted to do was redeem myself and get back in winning ways and show all the fans what I’m about, so being injured and not being able to do it was so frustrating.”

So what happened that night against dos Anjos in Abu Dhabi, where Etim didn’t look anything like the lanky force of nature that impressively defeated Sam Stout, Brian Cobb, Justin Buchholz, and Shannon Gugerty in succession?

“You know what, to be honest, I’m not gonna take anything away from dos Anjos, and I’m not gonna make any excuses,” said Etim. “I think you get some fighters and they say this or that wasn’t right and why things didn’t happen, and I just say it was dos Anjos’ night. I take nothing away from him.”

Scheduled to return four months later for an intriguing UFC 118 bout against Joe Lauzon, Etim withdrew due to injury, and there has been little light for the Liverpudlian until he was given the green light to train and fight again. Now he gets Faaloloto, and he gets him in his home country no less, an added bonus.

Rightfully the favorite against the hard-hitting Faaloloto, who lost his lone UFC fight thus far via TKO to Michael Johnson in June, Etim is returning to a division whose landscape has changed considerably since his last bout. Frankie Edgar, who won the 155-pound title on the same card where Etim lost to dos Anjos, is still the king, but WEC imports Donald Cerrone, Ben Henderson, and Anthony Pettis are now making plenty of noise in the division, while veterans Clay Guida, Gray Maynard, and Jim Miller also hold places in the lightweight pecking order. But instead of wondering what he just stepped back into, Etim is pleased with the developments of the last 19 months.

“I actually think it’s good,” he said. “It’s made the division a lot deeper, and I think there’s a few exciting guys that have crossed over from the WEC, so I think it’s gonna make for a lot more interesting matchups. Everyone’s fighting to get to the top and fighting for their place in the UFC, and it’s absolutely stacked.”

And Etim is under no illusions about his status in the division. He knows that he is basically starting from scratch again. But then again, given his talent and attitude, a few wins and he may be knocking on the same door he was in April of 2010.

“Hopefully I’m gonna come back with a bang and I want to get back up there as soon as possible,” he said. “I don’t mind who the UFC puts in front of me, I just want to fight the best guys up there and get back to where I was before the dos Anjos loss. I think I was building a bit of momentum, winning four in a row, so I don’t think it’s gonna be a problem getting back up there.”

It all starts again on Saturday night.

“On the night, I want people who are watching the card to remember my fight,” said Etim. “It’s gonna finish in a spectacular way, and whether it be a head kick knockout, a jumping knee knockout, or a nice submission, I want to give the fans something to remember. November 5th, it’s gonna be fireworks.”