Escudero Back in Business, Shuts Out de Lima 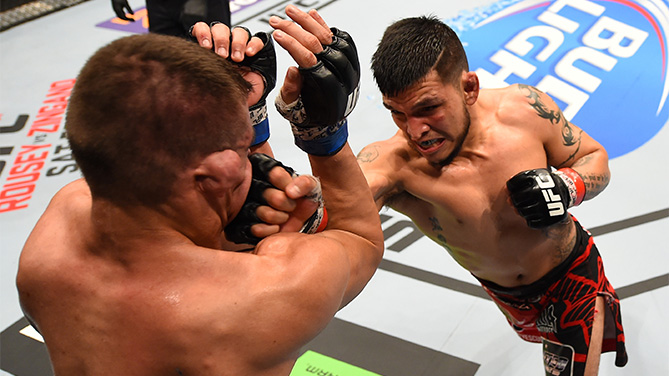 With his back presumably against the wall, former Ultimate Fighter winner Efrain Escudero scored his first Octagon victory since 2010 at the 1st Bank Center in Broomfield, Colorado Saturday night, delivering an impressive and dominant performance en route to a three-round unanimous decision over Rodrigo de Lima in UFC Fight Night action.

Scores were 30-27 across the board for the lightweight veteran.

Escudero rocked de Lima with a right hand in the second minute of the bout, prompting an all-out takedown assault by the Brazilian. A sloppy scramble ensued, Escudero making it back to his feet, where he rattled de Lima once more. In the closing minute, de Lima finally dragged his opponent to the mat, where he kept the bout until the horn sounded.

The striking of Arizona’s Escudero continued to rule the day in round two, and not just standing, but in the clinch against the fence and on the mat. The game but tiring de Lima, who was making his lightweight debut, kept working, and he scored an early third-round takedown, but it was Escudero turning the tables with takedowns of his own that added to his points total and secured his win. 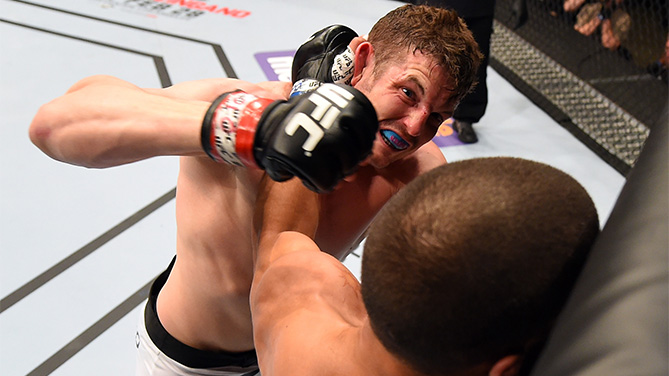 An evenly-matched clash of featherweight prospects played out that way until the second round, when Chas Skelly pulled away and scored a technical knockout victory over Jim Alers.

A close first round saw an exchange of leg lock attempts that produced a stalemate, but while on the feet, a couple flush left hooks by Skelly likely made an impression on the judges, even if they didn’t dent Alers’ chin.

In the second, Skelly’s attempts to take the fight to the mat came up empty, but the strikes continued to jar the Floridian, and finally, a series of rights left Alers defenseless, prompting referee Tim Mills to intervene at the 4:59 mark, just after Skelly scored with a right knee to the head of his downed foe. 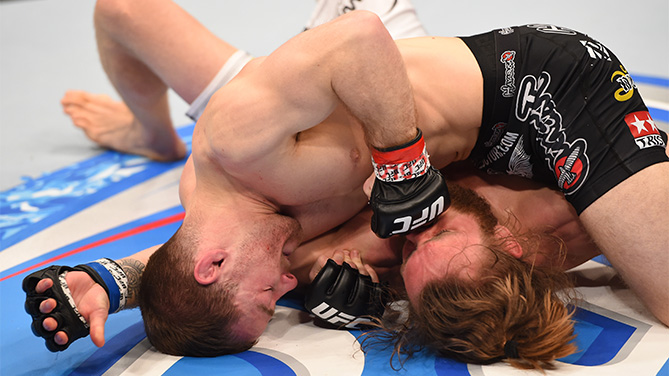 Flyweight contender Zach Makovsky earned his third Octagon win against Timothy Elliott in exciting fashion, surviving a furious effort from the Missouri product to take a close, but unanimous, decision.

Both flyweights got after it from the start, Elliott with his usual manic aggression, and Makovsky with a more traditional approach that included several takedowns, a north-south choke attempt and several strikes from the crucifix position on the mat.

The takedowns for Makovsky kept coming in the second, but Elliott wasn’t staying idle on the feet or the mat, with the fast-paced action thrilling the fans in Broomfield. Makovsky’s control looked like it was going to be the deciding factor, as he worked his way to Elliott’s back in the third round and stayed there for much of the frame, but Elliott made it close once again when he slammed his way out of trouble and nearly sunk in a choke. Ultimately though, Makovsky’s early lead was enough for the victory. 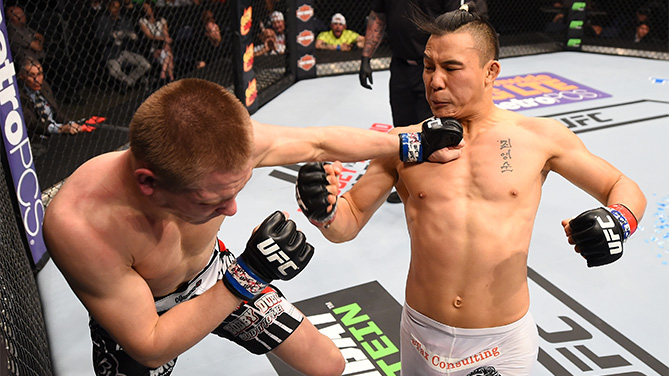 After missing weight for his lightweight bout against Octagon newcomer Cody Pfister on Friday, James Moontasri produced some good news for himself a day later, as he submitted Pfister in the second round.

Catching and hurting Pfister with hard knees several times as the Boulder resident looked for a takedown in the first round, Moontasri ended up finishing matters on the mat, as he brought the fight to the canvas and round two and locked in a rear naked choke that produced a tap at the 1:49 mark.