Erin Blanchfield Is Just Meeting Her Own Expectations

After An Impressive 2022, 23-Year-Old Erin Blanchfield Is One Step Closer To Where She Always Believed She Belongs: Amongst The Elite
By Zac Pacleb, on Twitter @ZacPacleb • Jan. 6, 2023

Erin Blanchfield sent a clear message the last time she stepped into the Octagon.

Facing Molly McCann in Madison Square Garden at UFC 281: Adesanya vs Pereira, “Cold Blooded” put on a flawless performance to cement herself as a name to watch in the flyweight title picture as the calendar turns to 2023. In the fight, Blanchfield landed 25 of 38 significant strikes while controlling the Scouse brawler – mostly in a crucifix position - for all but 50 seconds of the three-and-a-half-minute beatdown. After throwing what seemed like a hailstorm of elbows, the 23-year-old relented, locked up a kimura, and stamped the biggest win of her career with an appropriate dirt-off-her-shoulders celebration.

“I feel like it's like one of those moments that you’ll tell your grandkids, like, ‘Oh, I did this at MSG,’” Blanchfield told UFC.com. “I'm still young in my fighting career, and it is like, ‘Oh, maybe I could do it again. Maybe it’s something bigger like if it was like a title fight or something at MSG, it would be even crazier.’ I think that's where my mind is going. I'm kind of curious what the possibilities could be there, as well.”

The outing was another showing of great composure from the 11-1 phenom. Fighting in the World’s Most Famous Arena just a stone’s throw from her New Jersey home against a beloved fighter, Blanchfield never flinched or fought out of character. 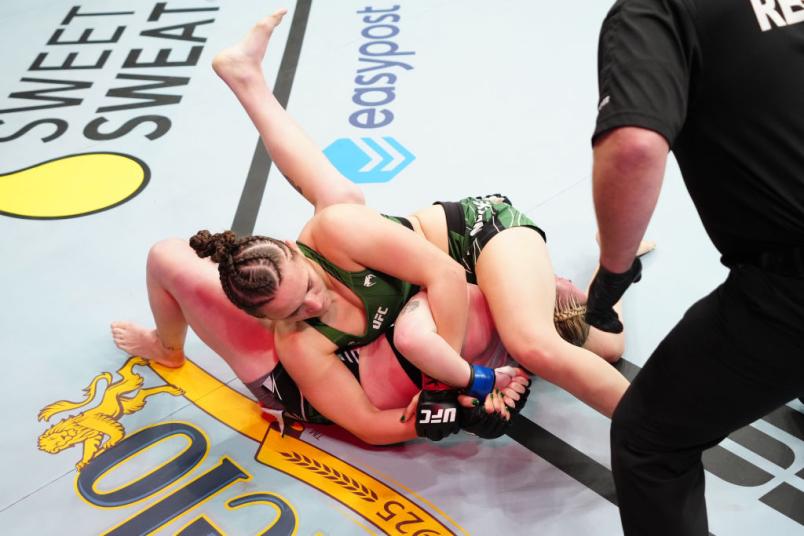 Erin Blanchfield secures a submission against Molly McCann of England in a flyweight bout during the UFC 281 event at Madison Square Garden on November 12, 2022 in New York City. (Photo by Jeff Bottari/Zuffa LLC)

In fact, the post-submission celebration was the only moment she allowed herself to respond to a crowd that seemed to mostly support McCann.

“I remember having her in the crucifix, and I was elbowing her, and the crowd was silent. When she took her arm out, everyone was cheering again because they thought she was going to escape, but I was like, ‘No, she’s not (laughs),’” she said. “Once I finished her, I think I was just more annoyed. I wasn't giving them a reaction before because I was just focused on the fight, but then after the fight was over, I can just feel everything. I remember feeling kind of annoyed, so that’s the reaction I had.”

The finish was Blanchfield’s second of 2022 after locking up a standing guillotine against JJ Aldrich earlier in the year and pushed her record to 4-0 in the Octagon. What followed were a slew of end-of-year accolades from publications touting her as the young fighter to watch.

Although the notoriety is nice and something Blanchfield enjoys, she also knows this is what she always knew she could do, and it was a matter of time before the wider MMA world took note.

“Everyone was like, ‘You’re the breakout fighter of the year,’” she said. “I see it differently because, obviously, it’s me, so I expect that out of myself. Obviously, other people, they're not me, so they don't know. But it's like, I know what I could do. it wasn't a surprise at all.”

Always one to keep her cool, Blanchfield credits her friends and family for reminding her when to get excited about a particularly cool accomplishment like getting a first-round submission win in Madison Square Garden. That even-keeled demeanor is a trait Blanchfield says comes naturally, as well as from high self-expectations, but she is doing her best to enjoy the moments as they come.

She didn’t get too much time to enjoy rest on her laurels. A few weeks after the win, UFC proposed a February 18 fight against recent title challenger Taila Santos, and although that meant starting camp inside of the holiday period – Blanchfield prefers keeping her summers open, anyway – the opportunity was too good to pass up.

“I definitely didn't expect it,” she said. “I was looking at who has fights and who didn't, or who's hurt, and it definitely made sense that she hasn't fought in a while. She’s number two, so that's a huge opportunity to go and take that spot from her. I’m going to fight all these girls anyway, so I was like, ‘Why not now?’ I feel like me and my coaches have broken her down, been training for her. As long as I get my training camps, if I feel good that day, I'll beat anybody in the world. Just another girl, another fight.”

Calling Santos “just another girl” might raise some eyebrows, particularly after Santos pushed champion Valentina Shevchenko to a split decision result at UFC 275: Teixiera vs Prochazka. Before that fight, Santos had dispatched the likes of McCann, Gillian Robertson and Joanne Wood in marauding, mauling fashion.

Despite those accolades, Blanchfield isn’t all that caught up in the stakes of the fight nor has she built Santos up to this ultra-intimidating figure. She imagined the potential future for herself should she beat Santos when the fight first came together and is eager at the prospect of potentially handing Shevchenko her first loss in the flyweight division. Given the way “Bullet” fought and at times struggled, Santos is an ideal measuring stick for the hopeful contender-to-be. 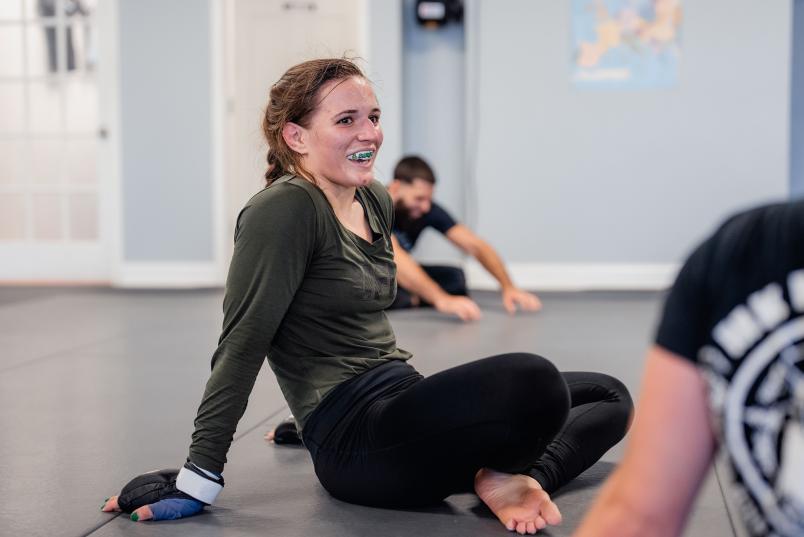 Since getting into camp, however, her focus has honed in on victory.

“You have to fight everybody to be the best in the world, and why would you be bothered to fight them or build them up more than they should be?” Blanchfield said. “Everyone is in the UFC, so everyone's super talented, and everyone's super good. That's a matter of fact. But I'm there too. I know how good I am, and I know what I'm capable of. There's no one that I feel (intimidated) about. I'm not like a fan of them or anything. I feel people - especially if they're fighting higher up or people they've been watching fight or something - they get almost like a fangirl about it. But no, you need to beat them. They're your opponent, and that's really it.”

From the outside, the matchup is a win-win for Blanchfield. If she beats Santos, she is in the title picture probably right behind Manon Fiorot in terms of Shevhcenko’s next deserving challenger. If she falls short, she won’t tumble down the rankings, and she’ll have a better idea of where she stacks up against the division’s elite.

However, when you’re someone who has grown up in the sport and has made success at the highest levels something routine, moral victories are not satisfactory. The best is still yet to come for Blanchfield, which is frightening considering the way she rallied against Aldrich and rolled through McCann. But when you ask her about it, it’s just executing on a lifetime of working on her craft, so as the chances for greater accomplishments present themselves, expect more of the same from New Jersey’s brightest prospect.

“I never plan on losing again,” Blanchfield said. “I know it would sting just as much as any other loss. I feel in the outside perspective, it's a win-win in a lot of cases because I'm going up to fight number two. If you beat them, you think that's fun. If you lose, it's like, well, I'm probably still going to move up if it was a good fight.

“I don't even think of it like that. I know I want to win, and I know how much it would suck if I did lose.”