Erin Blanchfield’s opponent on Saturday night – JJ Aldrich - is someone she used to watch when she was in high school, only a few years ago. But now the 23-year-old is thriving in the environment that has allowed her to make a climb up the flyweight ladder.

“It’s exactly what I want to do; I want to fight higher level opponents and test myself against them,” Blanchfield told UFC.com ahead of her bout at UFC Fight Night: Volkov vs Rozenstruik.

Her rookie campaign in the UFC was nothing short of impressive, going two for two against Sarah Alpar and Miranda Maverick. Her latest victory against Maverick extended her win streak to five and improved her record to 8-1. Blanchfield is one of many flyweight prospects that has shown potential, which is what makes the division special to watch.

“I think it makes the flyweight division a lot more exciting and I’m definitely happy to see other prospects coming up at the same time because I think it keeps people interested in the division,” Blanchfield said. “I feel good compared to the rest of them.”

With two wins in the UFC under her belt, Blanchfield is finally starting to feel her groove and is becoming more comfortable inside the Octagon, and with the events leading up to fight night.

The New York native has learned a lot about herself since he first UFC appearance last September.

“I think my biggest asset is how calm I am in there; I feel so comfortable,” Blanchfield said. “Even my first UFC fight, I feel like everyone talks about UFC jitters, but I didn’t really feel that at all; it just felt like every other fight, so I feel like I kind of learned that about myself as an athlete and I think that’s one of my biggest assets.”

Her opponent on Saturday is Colorado native Aldrich, who has been fighting in the UFC since 2016 and was also on The Ultimate Fighter. Aldrich is riding a three-fight win streak heading into the fight, her latest victory coming in March against Gillian Robertson.

Blanchfield has never been submitted or knocked out in her career and is confident in her all-around skills. 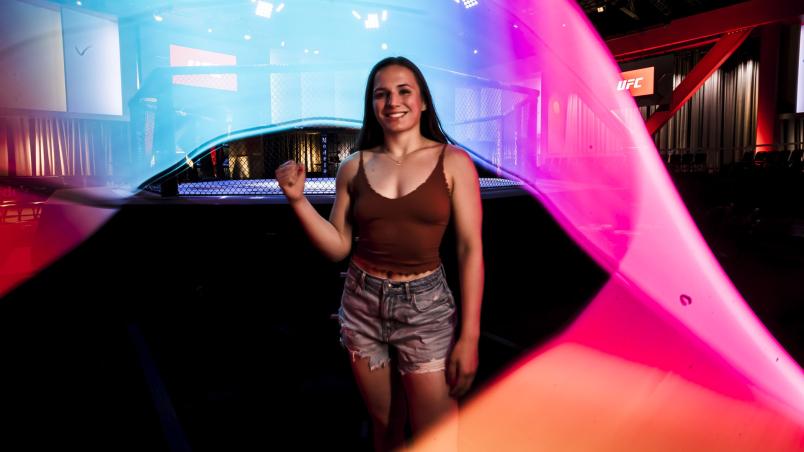 “I think she’s the most experienced fighter I’ve ever fought,” Blanchfield said. “She has been in the UFC since I was in high school, I believe, but skillset wise I think I match up great with her. I think it’s striker versus grappler. I think she’s going to probably try and stay away from me, but she’s not going to be able to do that for 15 minutes. I’m excited to show off on Saturday.”

Both of Blanchfield’s wins in the UFC have come by decision, which is something she wants to change going forward. Although she has been happy with her performances, her next step of improvement would be to start earning some finishes. Three of her eight wins have come by finish, two by knockout and one by submission.

At this level, Blanchfield knows that the difference between winning a fight and finishing a figh, comes in the small details and improvements.

“I feel like if I win, I should be in the rankings. You never know, but that’s definitely the goal.”