"It’s going to be an exciting fight just because we’re both exciting
fighters, but I go in with the mindset that I’m going to destroy him." - Erik Koch 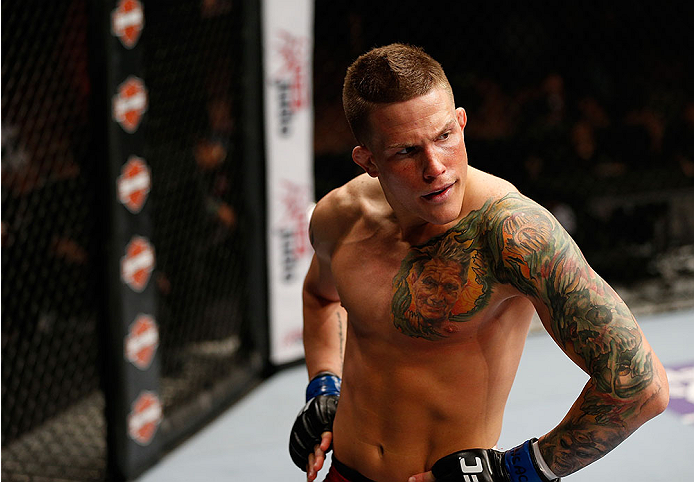 Erik Koch may be the oldest 25-year-old in mixed martial arts. Not in a ‘he’s got a lot of mileage’ on him way, but in terms of the experience he has and the maturity he’s developed as someone who has already been in this game for nearly a decade. And he’s embracing every minute of it.

“A lot of people come at me with, ‘oh, he’s young,’ but I don’t feel like it in that way,” said Koch. “I’ve been fighting since I was 16, so I’ve been doing it for a minute, and what comes with that is maturity. I have a young body and I can push myself, but I also have the mindset of a veteran that’s been in the game for so long.”

As such, he’s approaching his Saturday bout with Daron Cruickshank not as a meeting of two like-minded strikers who are going to throw down until someone gets knocked out, but as an opportunity to get another decisive win in his new weight class at 155 pounds and move on to even bigger and better things.

“No matter what the matchup is, I’m going in to dominate,” said Koch. “Because he’s another striker, people are like ‘oh, it’s going to be a war.’ Well, he’s a striker, but I want to finish him. I want to take him out. I’m not gonna say ‘let’s go in the center and just brawl.’ I’m a smart fighter, and I don’t take punishment if I don’t have to. It’s like those guys that say ‘I want to go out there and get Fight of the Night. No,’ I’m not looking for Fight of the Night; I’m looking for Performance of the Night. It’s going to be an exciting fight just because we’re both exciting fighters, but I go in with the mindset that I’m going to destroy him.”

This mindset has rarely done Koch wrong, and when you add in the fact that he’s got Iowa blood coursing through his veins, it’s clear that he’s got a significant upside in this sport. In fact, having toughness bred in him from an early age in Cedar Rapids has given him something to pull out of his back pocket if he needs it.

“It’s just the Midwest mentality,” he said. “Being an Iowa boy, we’re grinders and we push through it. I think technique first, but if I’m ever in a pickle, I got that hard-nosed Iowa boy to fall back on. I think it’s a big advantage, and I’ve got the best of both worlds. I’m still young, still explosive, still getting stronger, and then I have the mindset that I’m a veteran, I’ve been there a million times, and it all works out well for me.”

Toughness can often get confused with stubbornness though, and after Koch won four straight at featherweight between the WEC and UFC in 2010-11, he was scheduled to face Jose Aldo for the UFC crown. Injuries to both men scrapped the bout twice, and though Koch was fighting a grueling battle with the scale, he stuck around for two 145-pound bouts against Ricardo Lamas and Dustin Poirier, expecting that he would get his title shot back with a win or two. He lost both fights, which finally made his decision to move up to 155 for him.

“I knew the move was inevitable,” he said. “I’ve been contemplating it for a long time. I was fighting ‘45 when I was a kid, and I was a beanpole. I became a man and I put on muscle mass, and it’s just not a realistic cut. I’m cutting 10-15 pounds of muscle, and you can’t cut down to that weight and then restore all that in 24 hours. So the Erik you saw in those last two fights, that wasn’t me. It was somebody who walked into that cage feeling tired and feeling out of it.”

In February, Koch fought Rafaello Oliveira at 155 pounds and made short work of the Brazilian, taking just 84 seconds to score the stoppage win.

“I like lightweight way more than featherweight, I’ll tell you that,” he laughs. “It’s way better. It’s a huge relief because now I can think about the fight. I still cut weight, but it’s manageable. 145 was just ridiculous.”

It’s another step in the maturation of Erik Koch, and at this point, it looks like the sky’s the limit for “New Breed,” who has plenty of big plans as a lightweight.

“I’m always excited to fight, no matter who it is,” he said. “I’m super pumped for this fight, and I just want to get a streak going and keep it going. I want to get a lot of fights this year. And like every fight, I want to end it in dominating fashion.”