"I see multiple people saying it’s a Fight of the Night candidate, and I
don’t think it will be that way; I want Knockout of the Night." - Erik Koch 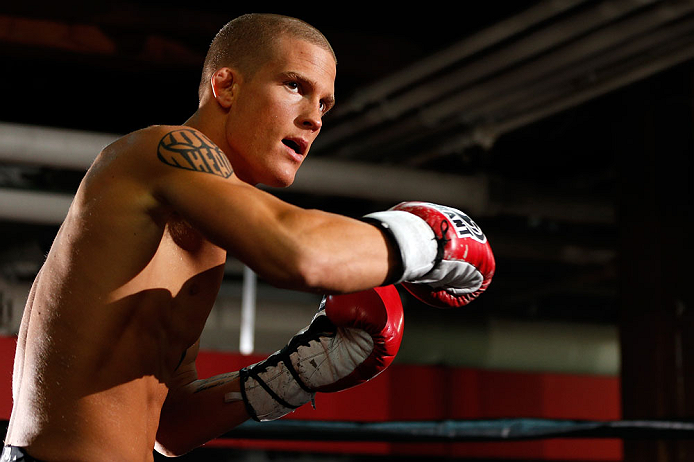 Sometimes the worst thing for a fighter isn’t what happens, but what could have happened. Perhaps no one in the UFC knows this better than featherweight Erik Koch.

In 2012, “New Breed” was scheduled for not one, but two major bouts: a UFC 143 clash with Dustin Poirier and a championship fight with Jose Aldo that was put on the slate for July and then October. Due to injuries, he ended up not fighting at all in 2012, and when he returned to action in January against Ricardo Lamas, he got stopped in the second round for his first loss since 2010.

That’s a lot to deal with when you’re only 24, but the Iowa-born Koch isn’t like the other 24 years old, primarily because he’s been training to become a fighter since before he was a teenager, so if anyone knows about the peaks and valleys of the sport, it’s him. But 2012 was going above and beyond the call of duty in terms of taking on bad news, and his start to 2013 didn’t improve matters much. He hasn’t strayed from his ultimate goal though.

“I want to get the title as soon as possible,” he said. “Especially just having the taste in my mouth of having the (title) fight, then losing it, and then having the setback with my last one, I definitely want to get back there. It’s one of those things – you have a couple roadblocks, and I just gotta march through and I gotta get back to where I was before.”

On Saturday in his adopted hometown of Milwaukee, he almost begins a do-over of 2012 when he faces Poirier at UFC 164.

“It was one of those things where I knew eventually it had to happen,” said Koch of his matchup with “The Diamond.” “Me and him don’t really like each other as well, and there’s a little bad blood there, so it’s definitely a fight we both want.”

So where did this animosity between two of the division’s rising stars begin?

“It’s nothing in particular,” said Koch. “I’m a pretty humble dude and he likes to talk a little trash. That may be his way of hyping the fight, but I’m not a big fan. So it’s time to get in the cage, shut up and put money where our fists are.”

Bad blood or not, this is a matchup that was good when it was originally scheduled in early 2012, and it’s even better now, with both fighters improving their games while also looking at the fight as a must win after recent losses. Yet while Koch admits that this weekend’s bout is an intriguing matchup, he’s not expecting a Fight of the Night.

“A fight between me and him is fireworks and it’s what people want to see. But I see multiple people saying it’s a Fight of the Night candidate, and I don’t think it will be that way; I want Knockout of the Night.”

If anyone can pull it off, it’s Koch, who has already picked up post-bout bonuses for his knockouts of Francisco Rivera (WEC) and Raphael Assuncao (UFC). And despite his defeat against Lamas, he’s used it as a motivator to sew up some holes in his game and get better.

“Even coming off a loss I think I’ve matured a lot,” he said. “I knew what things I was doing wrong that I had to fix, and I’m getting more comfortable in there every time.”

Comfortable enough that with a big win, he might just throw himself back in a crowded contenders’ race at 145 pounds.

“The guys we lost to (Koch – Lamas, Poirier – Cub Swanson) were both top guys, and I think a big win, especially in a decisive way, definitely throws one of us back up there,” he said. “There are a lot of contenders right now at ’45, but I still think we’re two of the top ones, and definitely getting the W will spring us back up there.”

And doing it in Milwaukee will be even better, right?

“It’s cool that I get to perform here and everybody I know gets to see me,” he said. “It means a lot, but at the same time, when the door closes it’s just me and him, so I don’t let that really mess with me. I’m there to do my job, and if I do my job, he’ll be on the canvas, my hand will be raised, and the Milwaukee fans can go nuts.”