Erick Silva: In Search of a Winning Streak

"We always have something that needs to be sharpened. We live
in a constant evolution, and inside the Octagon the winner is the
better prepared fighter." - Erick Silva 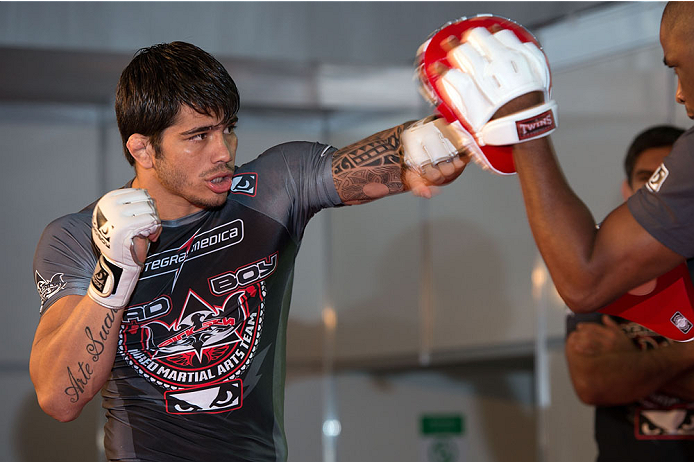 On that same night, a rising star took his first step toward building the reputation his veteran peers acquired after several years of blood, sweat, and tears; the athlete in this case, Erick Silva, who fights in the UFC Fight Night co-main event this Wednesday in Barueri against South Korea’s Dong Hyun Kim.

Silva (15-3, 1 NC), a native of Vila Velha, Espirito Santo, has fought five times in the UFC thus far, with two defeats that have interrupted his attempt to construct a winning streak inside the Octagon. But his status of rising star wasn’t shaken with his losses against Jon Fitch and Carlo Prater. In fact, what fans have been asking Silva about is why he fights more in Brazil than outside it. With the amount of events in the biggest country of South America, the important thing isn’t where you fight, but that you’re fighting. However, some fans still think your feats are bigger when they’re achieved away from your home turf. Regardless, a win is a win, and “Indio” Silva has a different take on the whole situation.

“The best part (of fighting in Brazil) is to have my family and friends close, in addition to the professionals which are used to working with me,” he said. “The Brazilian crowd is one of my points of strength; they’re always supporting and motivating me when I step in the Octagon, so I don’t see any negative points [about fighting more in Brazil than outside].”

And no matter where you fight, the more you win, the more your name will be spoken, so Silva has been seen often during the media days in Brazil. And after signing posters and interacting with the fans, the welterweight prospect realized quickly that fighting and winning is important, but you also need to be seen when you’re not fighting.

“We, as professional fighters, realize that we need to do this when kids, teenagers and even adults see us like role models,” Silva said. “I love to participate in these media tours, because it’s the opportunity to feel their affection and hear the complaints. Even though our lives are very strict when it comes to what we eat, the training, and the time to rest, there is nothing better than dedicating time to those who motivate us to win.”

Silva seemed to be very motivated in his last performance, using an uncommon armbar inside an inverted triangle to force Jason High to tap out in the first stanza on June’s UFC on FUEL 10 show in Fortaleza. But Silva is a perfectionist, always focused on the points he can evolve in, even though he won his last bout quickly.

“We always have something that needs to be sharpened,” he said. “We live in a constant evolution, and inside the Octagon the winner is the better prepared fighter. There is no place for overconfidence. Whoever trains know that if a clean punch connects, the fight is over. MMA is unpredictable, I’m aware of it, and I identify points that I can improve on.”

And he took that lesson most strongly in the UFC 153 Fight of the Night against Jon Fitch.

“I improved in all aspects after that,” he said.  “We learn more from the defeats, but I was happy because of the Fight of the Night performance against Fitch, one of the best welterweights. It’s good to see that the UFC officials like my fighting style and decided to test me against a former title challenger. I got back to the gym, evaluated my mistakes, defined new strategies, and today I feel ready to face a guy like Kim with more grappling.”

So, the key to the victory here is to avoid the grappling of Kim, stay on the feet and knock him out?

“I like to stand, I always said that, but I’m a BJJ black belt and High was good on the ground and I subbed him,” said Silva. “I know the strong points of Kim, I studied his style, and my goal is to impose my game. If we go to the ground, fine. I trained with Bruno Frazatto in this camp, and he’s responsible for my ground game in all my victories. I’m ready for all situations. Let’s go fight!”

Erick “Índio” Silva is on fire, hungry for a great performance capped by a huge finish, a result that would send him closer to the top 10 of the welterweight division, and, of course, finally start the winning streak the rising Brazilian star craves.

“The UFC believes in my potential and has given me the opportunity to put on a good fight.” he said. “I don’t think about rankings; however, I can’t deny that a victory over the South Korean will lift my name. I hope to get it and take new challenges. The only thing I want is to be active and not go away.”