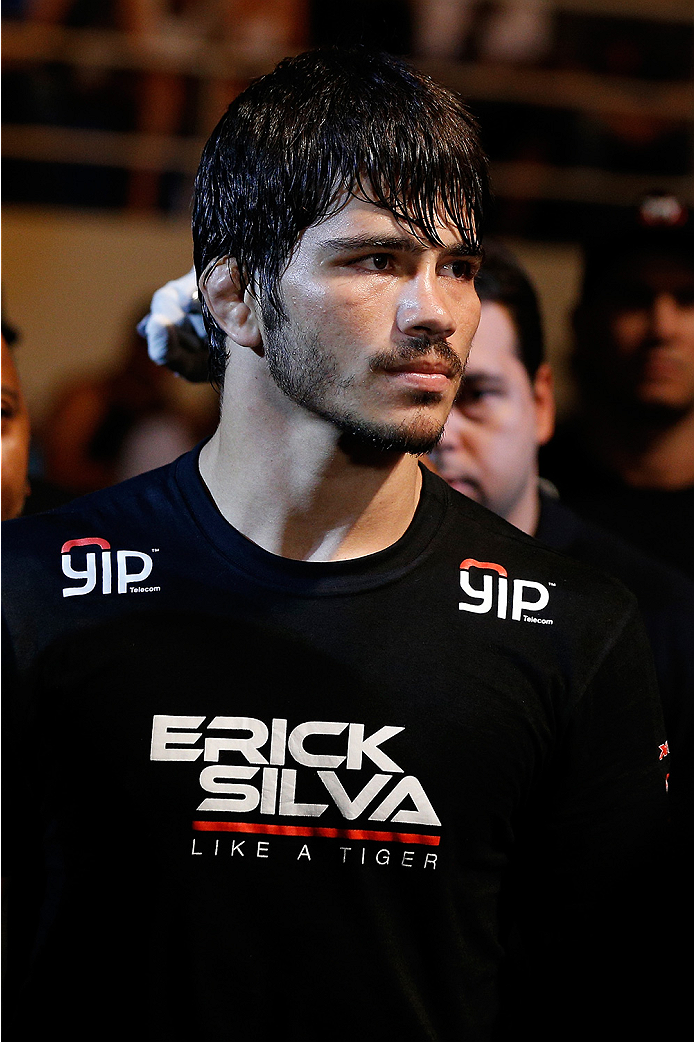 The first UFC event in the country in more than a decade was accompanied by tremendous hype, and those sitting and watching the show on television could feel the electricity that coursed through the raucous crowd inside the venue, the din from the audience becoming the soundtrack for the evening.

While there was nothing that would silence and settle the 14,000 fans in attendance, the opening two bouts of the show gave it their best effort, as both went the distance, bringing the energy levels in the arena from “awesome rock concert” to “dull roar,” but then Erick Silva showed up.

The Brazilian welterweight erupted onto the UFC landscape like the final series of colorful explosions in an orchestrated fireworks display.

Thirty seconds into his debut, Silva cracked Luis Ramos with a looping overhand right that shook his jaw. Ten seconds later, the bout was over and the former Jungle Fight champion was running up the padded corner turnbuckle, executing a celebratory backflip on par with those delivered by flyweight standout John Dodson.
> Watch Silva's UFC debut fight against Luis Ramos

His next two outings were equally explosive as he swarmed Carlo Prater in under 30 seconds and submitted Charlie Brenneman inside of the opening five minutes to prove that the high praise from the likes of Anderson Silva and “Jacare” Souza that initially accompanied him to the Octagon was justified.

But time has changed the way Silva is perceived. Once viewed as a potential contender and perhaps even a future champion, the native of Vila Velha is now seen as being consistently inconsistent – a fighter that alternates wins and losses with each appearance.
“Every fight is a whole different story,” Silva said through his press agent, Renan Bernardes. “I can’t point to a simple factor to attribute to my losses. Actually, the losses may serve to help me learn and observe what I wasn’t doing right and what I need to improve even more.”

Though he steamrolled Prater in his sophomore outing, he was disqualified for landing illegal blows to the back of the head. A hard-fought loss to Jon Fitch in a Fight of the Night-winning effort followed the win over Brenneman.

Every time he’d get back into the win column, a tough assignment would result in a setback, stunting his momentum. After earning a first-round submission win over Mike Rhodes in late December, Silva returns to the Octagon on Saturday night looking to break the cycle of inconsistency.

Originally scheduled to face resurgent welterweight Ben Saunders, the 30-year-old Brazilian will instead face veteran Josh Koscheck, who was tapped to replace “Killa B” last week and enters the contest fresh off a second-round submission loss to Jake Ellenberger at UFC 184 in Los Angeles.

“It changes a lot,” Silva said of the late shift in opponents. “Saunders is a Muay Thai fighter, tall and left-handed. Koscheck is a wrestler, not that tall and right-handed. It means I’ve been prepared to do another type of fight, but I’m not here to select the opponent. I am preparing to fight and do what I have to do.”

Less than a month removed from his loss to Ellenberger and riding a four-fight losing streak, the 37-year-old Koscheck hasn’t won since earning a split decision victory over Mike Pierce more than three years ago and he appears to be at the tail end of a terrific career inside the UFC cage.

On top of that, former lightweight champion and welterweight mercenary Benson Henderson took to Twitter and volunteered his services on Saturday, and the thought of seeing “Smooth” share the cage with the talented Brazilian got plenty of people buzzing, but it wasn’t meant to be.

“(It’s like) how I said before, I’m not here to choose against who I will fight,” Silva reiterated when asked about the selection of Koscheck and Henderson’s willingness to take the fight.
“Koscheck is a really great fighter and I’m not thinking about his losses. He is tough, but I’m giving my best in my camp and I want to win this fight.”

While his results have been varied, one thing that has never wavered is Silva’s approach in the cage.

From his first fight with Ramos though his victory over Rhodes in December, the 17-5 welterweight who has garnered a performance bonus of one kind or another in six of his last seven appearances has remained an aggressive, offensively-minded fighter and he has no plans on changing that this weekend.

“It means a lot,” Silva answered when asked what it means to be recognized as one of the most exciting fighters in the UFC. “Having a great fight gives every athlete satisfaction. In all cases, the most important thing is winning. If it’s possible to win in an exciting moment, it becomes even better.

“I think being aggressive is my way to have a safe fight,” he added. “It’s seems to be my best way to fight.”

Silva will bring that constantly aggressive style to the Octagon for the tenth time Saturday, trying for the fifth time to put together his first two-fight winning streak in the UFC.

Despite the late change in opponents and history of starts and stops, he’s confident that the time for him to put together a winning streak and make some real progress in the division is now.

“It’s all about work hard,” he said, synthesizing the reason for his inconsistency down to its base. “I’m really focused in my training and I always want to improve my performance in every fight. I feel confident and prepared.

“(As for how this fight plays out), I see what I’m preparing to do: win the fight. I want so bad to get positive results. I will give my best and get out of the fight with a win.”
> Check out the full UFC Fight Night: Maia vs. LaFlare fight card