Eric Wisely - An Unlikely Prizefighter Finds His Home in the UFC

"I’m bringing a high pace with hard hitting, takedowns, sprawls, you name it, I’m gonna do it." - Eric Wisely 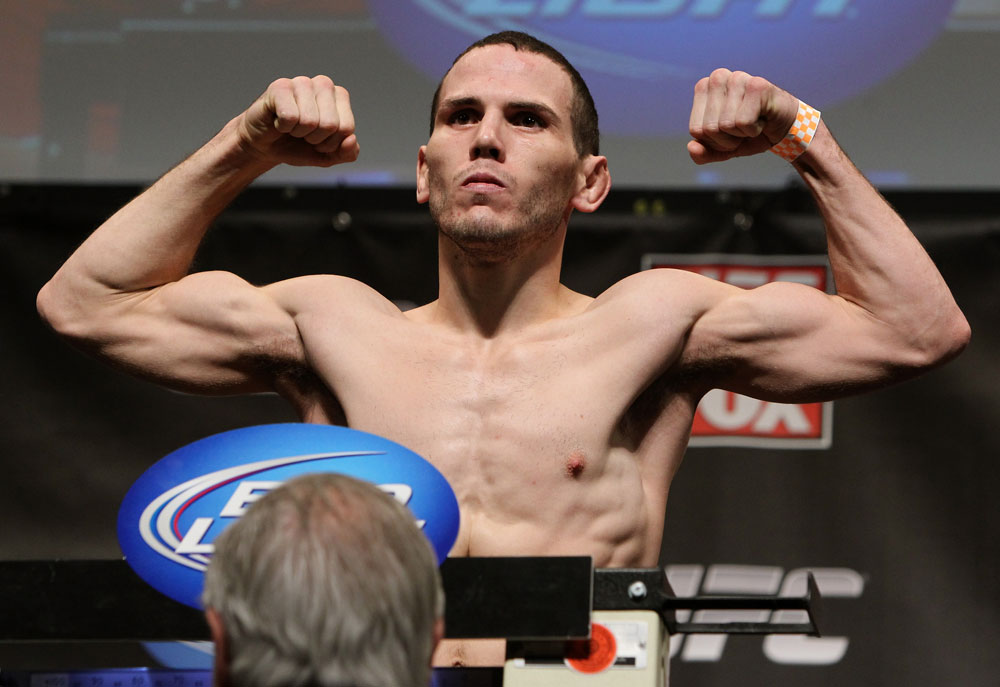 If you’re searching Clinton, Iowa for Eric Wisely on a Friday or Saturday night, don’t look for him at the local gentleman’s club, as he’s had some bad experiences in venues like that.

“Every time I went, I got into a fight, sometimes twice,” said Wisely of his two visits to the club Amsterdam, but get your mind out of the gutter. The East Moline, Illinois native wasn’t fighting over Daisy May on stage three. Instead, it was at the Amsterdam where five years ago his friend Karl Kelly thought that he would be a good fit in the fights the club used to present.

“It was always packed,” said Wisely of the club. “A buddy of mine always knew that I was athletic, but I’m not a people person. (Laughs) I’m surprised to this day that I’m in front of millions of people and I couldn’t go in front of the classroom and talk to 20 people, let alone take most of my clothes off and get into a cage with another guy.”

But he did, and immediately, he was hooked. So what kept him interested in this new world of mixed martial arts.

“I won,” he deadpans. “And being competitive, everything I do, even if it’s for fun, it’s still as hard as I can do it, and it definitely happened a lot quicker than I thought. Once you got in there and the fight started, it was like bam, it was over. It surprised me, but I think I liked it at the same time.”

By the end of 2006, his fighting in amateur bouts led to a start as a professional, and he was off to the races, learning on the job in a Midwest circuit that will keep you busy while also separating the men from the boys. Soon enough, Wisely showed that he was one of the top prospects in the area, beating most of the local talent, and when he lost, he was never finished, even going three rounds with current UFC featherweight contender Erik Koch in 2007.

“I think the reason it took so long was because I was training in a little gym in Clinton, Iowa and I had to beat pretty decent guys just to get noticed,” he said. “That’s why I went to a TUF 12 tryout, to get that experience and get noticed and see how all the background is.”

In January of 2010, the rest of the fight world started to take notice of Wisely when he took just 2:03 to knock out former world title challenger Hermes Franca, who was just four months removed from being on the UFC roster. Eight months later, Wisely beat Franca a second time, sandwiching the victories around a tryout for The Ultimate Fighter’s 12th season. He didn’t make the cut, but the Zuffa brass was now paying attention.

In April of 2011, he submitted another UFC vet, Matt Veach, and soon, he was contacted by Strikeforce. His foot was in the door.

“You’re waiting and you just beat Franca twice and you just beat Matt Veach and nobody’s calling, and the next thing you know, I finally get into Strikeforce,” he said. “I knew it was gonna take longer, and it was definitely a little bit longer than I thought it would be, but I stuck with it because I was still winning. If I was losing, I probably would have re-thought my strategy and taken a different approach, but it worked out for the best.”

Wisely would drop his Strikeforce debut to the surging Pat Healy last August, but after a non-Zuffa win over Brandon Girtz last November, he was brought into the UFC in a new weight class, featherweight, to take on Brazil’s Charles Oliveira on January 28th. Things didn’t work out as planned though, as he was caught in a painful-looking calf slicer and submitted in just one minute and 43 seconds.

“Now that I think about it, I don’t even remember it hurting,” he said of the finish, which dropped him to 19-7 as a pro. “I took it pretty good and I figure I learn the most from my losses, although I can’t say I’ve never been finished now. But I was ready to get back in there and make up for it.”

He gets his chance this Saturday against England’s Jason Young, a fortunate turn of events that came about when Akira Corassani was injured and forced to withdraw from the match. Once Wisely heard about the opening, he wanted it.

“As soon as I heard that his guy backed out, my manager asked me if I wanted it,” he said. “After my last one, especially since I lost, I was like I’m ready to go.’ I’ll show ‘em what I got and move forward. There was no hesitation at all.”

The fight is on short notice for the Iowan, but once you remember that this is a kid who was used to fighting multiple times on one night, that’s not a problem, and it’s clear that he’s done his homework on the man dubbed “Shotgun.”

“He’s very crisp on his feet,” said Wisely of Young. “I know he’s got a 1-2-3 and a kick combo, and he’s got fancy standup. The ground is where he’s lacking the most, and our gameplan will hopefully find a lot of his holes. He’s tough, his endurance is good, but in the second and third round he starts to slow down a little bit, and that’s where you can start to pick it up and find the holes a lot bigger. It’s gonna be a tough fight if I can’t get him down, and a long fight.”

But as Wisely readily admits, “I like the battles,” and with seven knockouts on his record, he can crack a bit too, though his ability to stun and finish foes comes mainly from his unorthodox striking style, one that can lull you into a false sense of security long enough for you to be staring up at the lights moments later.

“My standup is very weird,” he laughs. “I move a lot, I’m very hard to hit, and in 40-something fights, the only shots I’ve gotten hit with are grazing ones that cut me open. I’ve been hit hard, but I’ve never really stumbled or got dizzy. I’m very, very strong for being such a little guy, and I think it’s from working with a lot of big guys in my gym.”

Wisely’s come a long way from fighting in the strip clubs of the Quad Cities, and even though the atmosphere may initially be hostile in Stockholm considering that he’s fighting a European, he expects that by the end of the night, his style will gain him a few thousand new fans.

“I’m assuming they’re gonna be booing when I come out because it’s his backyard, but I’m bringing a high pace with hard hitting, takedowns, sprawls, you name it, I’m gonna do it,” he said. “I’m gonna be on him the whole time, non-stop.”