While Dominick Cruz has been out of action for much of the past four years rehabbing a series of injuries, TJ Dillashaw, a product of Cruz’s creative fighting style, has emerged as champion and taken the game to the next level.

Tonight Cruz returns determined to reclaim his title against Dillashaw in the main event of Fight Night Boston on FS1 at TD Garden.

Dillashaw had to become a Cruz clone for teammates at Team Alpha Male years ago when Urijah Faber and Joseph Benavidez clashed with “The Dominator.” So he mirrored Cruz’s footwork and studied the then-champion.

“He had to take something out of the book,” Cruz said of Dillashaw’s fighting style. “And the truth is that when you look at styles, everybody is looking at champions and trying to steal something. TJ has seen what has worked for me and what’s won me four world titles. He’s seen what helped me beat all his teammates.”

Against former champion Renan Barao, Dillashaw mixed up movement and power to dominate the Brazilian twice while ascending to the No. 4 spot in the pound-for-pound rankings.

Dillashaw gives credit to Cruz for his ability to mix things up as well.

Among active bantamweights, Cruz holds the record for striking defense with a 76.5 percent mark. At the same time, Dillashaw is the all-time UFC/WEC leader in striking rate, landing an astounding 5.81 significant strikes per minute during his career.

The battle between Dillashaw’s punching power and Cruz’s elusiveness will be a key area of the fight to watch. 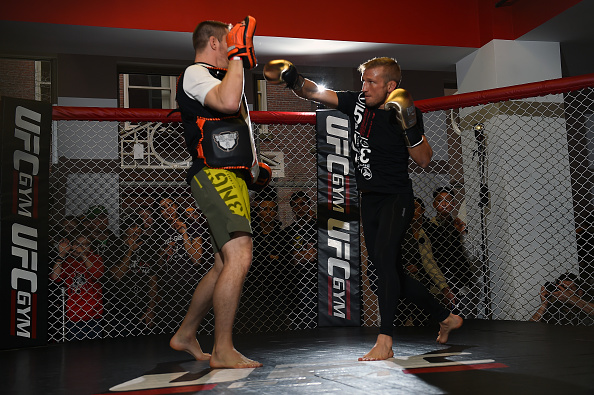 “The reason why we’re both in this situation today is because we both mix everything up so well,” Dillashaw said. “We’re both full-on martial artists. We can do every aspect of MMA. He’s got good timing and able to keep you guessing, but I do the same if not better.”

A lot of attention in the lead-up to this fight has been centered on the footwork of both Cruz and Dillashaw in the standup department.

Back when Cruz reigned atop the bantamweight division, people watched with awe as he dipped and ducked around the Octagon to set up his offense.

Cruz moves his feet simply to be able to see every position available to him.

“I’m not looking for specific things; all I do is I work my footwork to be in any specific position no matter where the fight is,” Cruz said. “That’s what makes my footwork different because I don’t have a set, stationary look that I’m going to with my feet.” 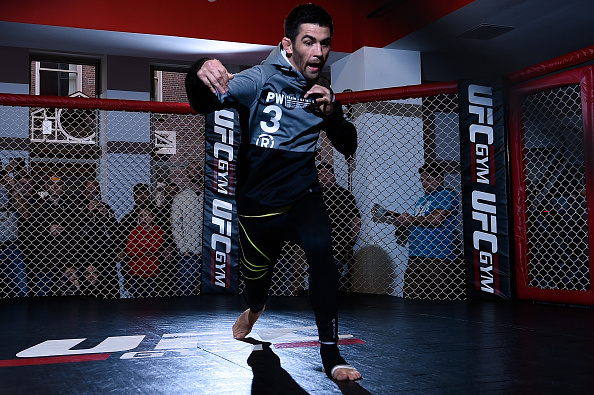 Dillashaw has been studying Cruz for years and said that he saw holes back when Cruz was competing as champion.

“There’s not one champion that was the champion when he was a champion,” Dillashaw said. “Times are changing and the sport is getting better. I’m not saying he’s not good. He’s going to come out and I’m expecting the best Dominick Cruz. I just feel that I’m better.”

Throughout his career, Cruz has relied on his instincts once the fight begins. He said that when he begins to flow that’s when the best Cruz comes out.

When Cruz begins that flow tonight, he said he will figure out a way to best Dillashaw and regain his championship.

“He’s been in better shape than everybody that he’s faced, but that’s a gift he won’t have against me,” Cruz said. “I can match his pace and that changes the dynamic of things.