Read on for a recap of the sixth episode of The Ultimate Fighter Brasil.. 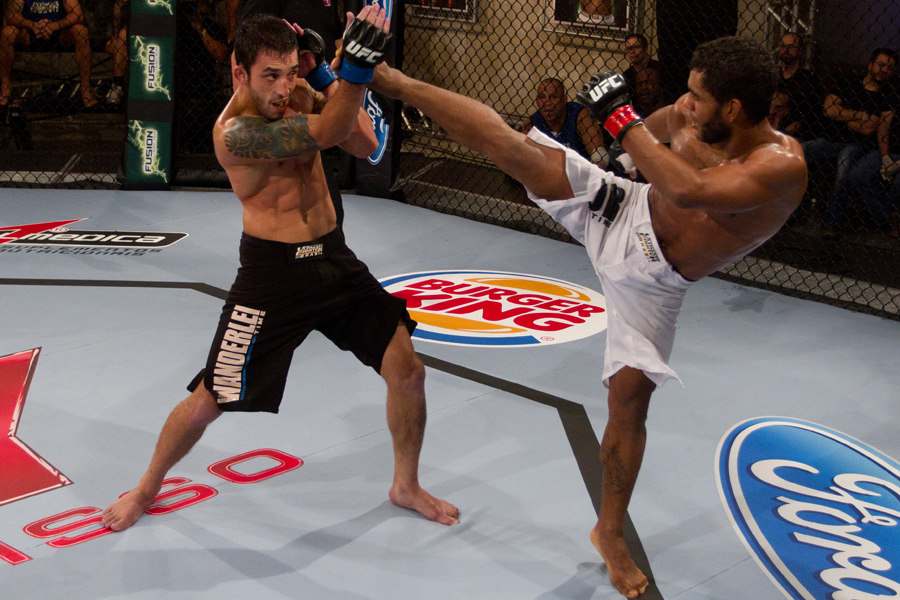 Despite the declaration of war made by Rony Jason and Delson Pé de Chumbo’s idea of sharing rooms according to teams in previous episodes, the atmosphere in the house remains in harmony.

With the score in favor of Team Vitor, 4-0, episode number six of The Ultimate Fighter Brasil is crucial for the hopes of the coaches of Team Wanderlei. The pressure for a victory was already being felt when Renee Forte was submitted by Daniel Sarafian in the third episode, and at that time the score was only 1-0 for the team led by the former UFC light heavyweight champion, Vitor Belfort. Now with the disadvantage hitting epic proportions, the fifth fight inside the house is all or nothing for the blue team.

Leonardo Macarrão's recent fight may have worked as a motivator for the upcoming fights of his teammates, because while Macarrão was submitted, he showed a strong will and great Muay Thai before succumbing.

Some fighters are already starting to look at what lies ahead, even though Cezar Mutante is saying that the most important is the next fight and not what happens beyond that.

It is clear that Vitor's pupils know that they may face each other soon.  With the reality show unfolding, the paths start to get narrow and the choice for the featherweight bout will leave the next fight of the division defined.

In an agreement between the coaches, the sequence of the fights involves only the featherweight division of the house, and Vitor's choice is Marcus Vinicius "Vina" Pancini and Hugo "Wolverine" Viana for the last fight before the quarterfinals.

Back at the house, the athletes that will fight have the right to a "gastronomic spree" one day before the fight, and Vina and Wolverine don't waste time to get this job done.

Godfredo Pepey returns to being the center of attention in the house because of his posture, and the rival team thinks he's cocky. This keeps Pepey away from some, and the first impression they got from him won’t be changing anytime soon.

This week’s fight begins with good movement from both, and Wolverine gets the better punches off before clinching, and Vina responds with a knee to the waistline. Trying to seize the moment, he applies more knees that force Wolverine to let go of the clinch and use his boxing. Separated, Wolverine uses an overhand right, making Vina lose balance.

Later, Vina, a Bahia native, found the perfect distance to get in and out of his opponent’s guard, using his fists well. But a second of lost balance from Wanderlei's pupil made Wolverine finish the round better, and a takedown followed by some ground and pound guaranteed a 10-9 round for the athlete from Team Vitor.

After studying his foe at the beginning of the second round, Vina delivered a strong low kick to Hugo's left thigh. Round two also had a unique moment on the ground when Vina went for the takedown, got a knee, but couldn't keep his opponent on the ground.

Once standing, Wolverine intended to keep the same pace with his striking and leg kicks, but Vina had his best moment with a series of knees in the best Muay Thai style. Wolverine tried to get out of the opponent’s dominance, and despite moving forward all the time, the pace of the second round also affected Vina. Failing to score consistently in those five minutes, he wasn’t able to convince the judges that he deserved the round, and at the end of the bout, Wolverine won via unanimous decision to move forward in the competition.

"What makes us upset is that I know that his ability is far greater than what he showed," said Wanderlei of Vina.

"I'm so happy I could show a little more of my martial art," celebrated Wolverine, a Salvador native.

After the celebrations and lamentations from the two participants in the fight of episode six, Rafael Cordeiro, the most experienced coach of Team Wanderlei, showed his dissatisfaction  with the performance of the defeated athlete who was not listening to the instructions of the blue corner.

And while Vitor’s team is now up 5-0, the next three athletes led by Wanderlei - Pé de Chumbo, Massaranduba and Ronny Jason - will have a chance to redeem their team should they get to the finals and, consequently, win the season title. But that’s an arduous task, with five of their teammates already out of the competition and with little motivation.