Read on to find out the results from episode five of The Ultimate Fighter: A Champion Will Be Crowned. 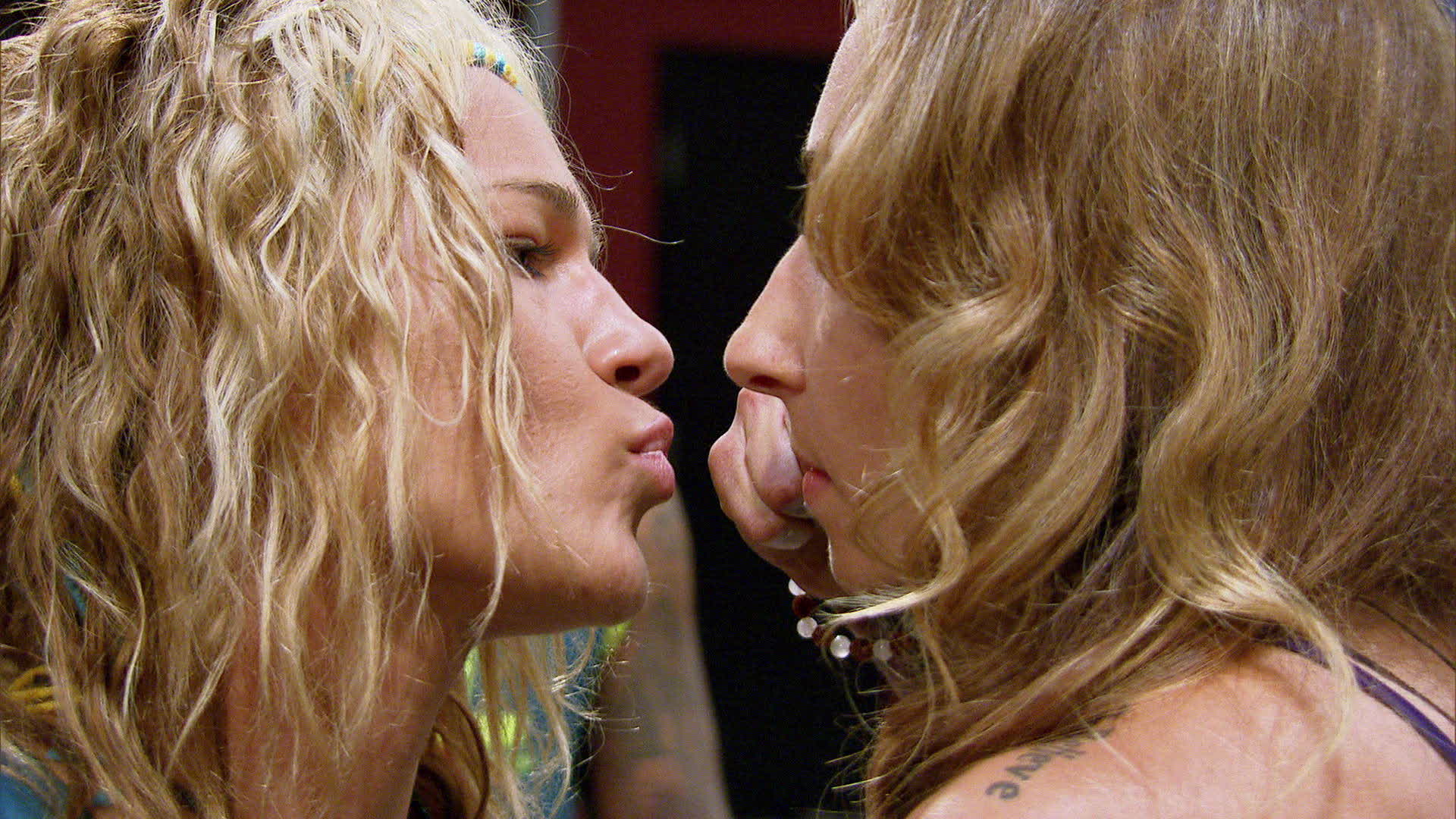 This week’s episode focuses on the highly anticipated grudge match between No. 6 Felice Herrig and No. 11 Heather Clark. Heather explains her distaste for Felice by politely saying, “I don’t particularly care for [Felice’s] antics.” She then throws out all civility and calls Felice things like trashy, obnoxious and tasteless. She may be concerned with Felice’s antics, but Heather should also worry about her own teammates. Sensing the rising tension, Coach Gilbert Melendez calls a team meeting. Besides most of the other women not liking Heather personally, they are especially agitated by the fact that Heather has not been training with the team. Heather blames a knee injury for preventing her from participating fully, but the other members of the team think she’s milking it. The meeting does not go well and culminates in Angela Magana yelling at Heather and saying, “It’s really hard for us to cheer for you.”
Back on Team Pettis, Justine Kish battles a knee injury of her own. The doctor shows up with her MRI results and has to deliver some bad news. Justine has an ACL tear and will have to undergo reconstructive surgery. She has to drop out of the tournament, and rumors soon start circulating about who will replace her. Dana White then shows up to clear the confusion. He decides to reinstate #3 seed Tecia Torres. Not only that, Tecia must now join Team Pettis. This decision upsets everyone. Team Melendez doesn’t want to lose a teammate, and Team Pettis doesn’t want a new one. Dana reminds everyone that, “This is not a team sport,” and that’s the end of the matter.

The focus returns to this week’s fight and we hear Felice Herrig’s side of the story. Felice admits that, “I don’t really know where the bad blood stemmed.” Right now she’s more concerned with her coaching staff than Heather’s hatred, though. Still adapting to the coaching staff, she doesn’t like that they’re giving her a gameplan for the fight. She says that she doesn’t like having a plan going into a fight and doesn’t appreciate having new coaches tell her what to do. Couple that with the added pressure of the show, Felice’s anxiety starts to increase. Coach Pettis notices this and sees that his fighter is “starting to second guess herself.” Can Felice show the mental toughness to overcome these doubts? We’re about to find out because it’s fight time!
> Watch: Felice Herrig Practice Highlights | Felice Herrig Film Session | Heather Clark Practice Highlights | Heather Clark Film Session
ROUND ONE
Felice attacks with her legs while Heather tries to work her boxing. Felice attempts and early takedown and Heather digs in a guillotine. She works a couple different grips and really cranks on the hold, but she can’t 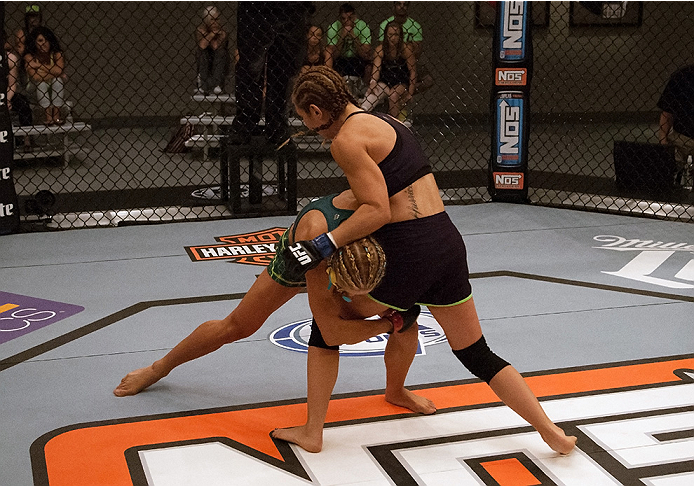 finish the submission. Felice finally pulls her head out, and the two clinch against the cage. After reversing positions a few times, Felice hits a trip takedown. Working from half guard, Felice doesn’t really try to advance position. Heather bides her time, explodes and rolls Felice over. Felice throws up a triangle choke attempt and then transitions to an armbar. Heather fights off the lock by wrapping Felice in a body triangle. The action stalls, but Felice breaks free with 30 seconds to go. She takes top position and lands a few punches as the round ends.
ROUND TWO 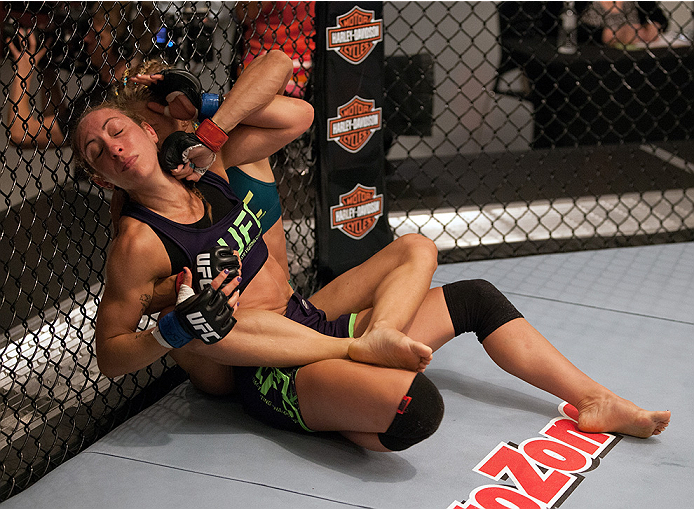 Felice attacks with both inside and outside low kicks while Heather works her boxing. The two quickly tie up up and fight against the fence. Felice ducks under the clinch and drags Heather to the ground. Stuck in the turtle position, Heather tries to stand up as Felice tries to secure her hooks. She eventually digs them in and starts searching for the rear naked choke. Heather fights off the submission, but absorbs some ground and pound in the process. After fighting off attacks, finally takes top position with less than two minutes remaining. Felice holds on tight, though, and Heather can’t generate any offense. The referee stands them up and the two waste no time coming at one another. The two trade punches and knees inside the clinch. With less than a minute to go, Felice drives for another takedown and finishes it. There’s a scramble and Felice locks up back mount as the round ends.
All three judges’ scorecards come back 20-18 for Felice Herrig. Felice is pleased with her performance and remarks that now, “[Felice] has no excuses.” We then cut to Heather who starts making excuses about her knee injury. Despite all that, the two hug it out in the end and Heather apologizes. Who says MMA can’t bring people together?

We move to next week’s fight announcement. Team Pettis maintains control and chooses their No. 5-ranked fighter Aisling Daly to face No. 12 Angela Magana. Can Team Pettis continue their dominance? Will Angela Magana pull the upset? Does Heather Clark make any more enemies? Find out this and more next week on The Ultimate Fighter!