Relive the 12th Episode Of The 30th Season Of The Ultimate Fighter Where Team Peña vs Team Nunes Fight To Determine The Next Stars Of The UFC Flyweight And Heavyweight Division
By E. Spencer Kyte, on Twitter @SpencerKyte • Jul. 19, 2022

Previously on The Ultimate Fighter…

In the flyweight quarterfinals, Team Pena brawler Juliana Miller rallied to beat rival Claire Guthrie, while Team Nunes’ Kaytlin Neil took out Helen Peralta in an all-out battle. Now the final two semifinalists square off to see which of them will advance to face Team Nunes’ Brogan Walker in the finale.

This is The Ultimate Fighter: Team Pena vs. Team Nunes!

Neil sits with her teammates in the kitchen, discussing the matchup with Miller, especially Guthrie, who has fought her twice and told her teammate to just prepare for an all-out battle. Neil acknowledges that Miller took a bunch of damage in her fight with Guthrie and had very little time to recover, leading her to wonder if that could have an impact on their meeting.

All Things The Ultimate Fighter

Evening at the house…

Miller makes her “family call” to her coaches, “Boogeyman” Richie Martinez and “Hurricane” Manolo Hernandez, detailing her battle with Guthrie. She explains how Pena’s head coach Rick Little instilled confidence in her from the jump, making her feel like she was back home immediately.

Martinez advises Miller to let go with her jiu jitsu in this fight with Neil.

Four Days Until the Fight… 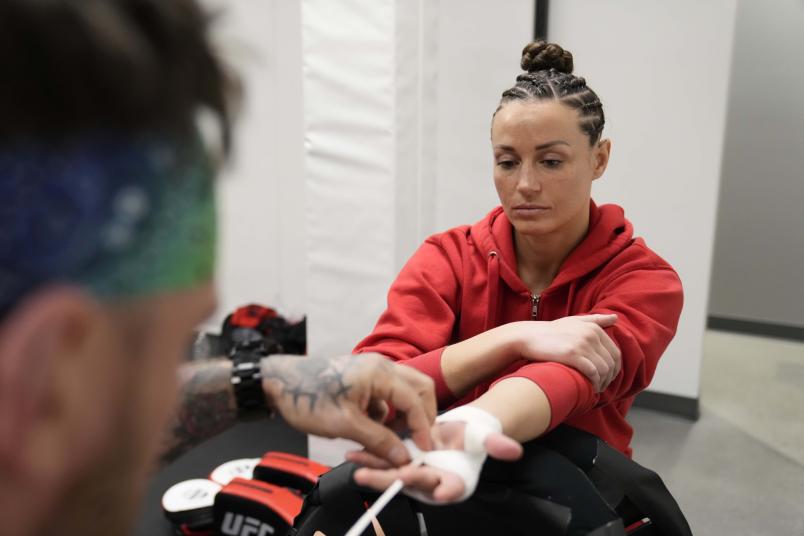 Neil goes through her fight prep, with Amanda Nunes calling the matchup perfect for her fighter, who works her striking with John Wood. She believes Neil will be more cerebral, move more, and not get into a back-and-forth with Miller the way Guthrie did.

Neil knows that Miller likes to push the pace, stating she’s going to have to increase her volume, but believes she’s going to be the more complete fighter of the two when the cage door closes.

Back at the house…

Neil calls home to her boyfriend, fellow fighter Aldyn Ashcraft, and her cat, Potato, who had to have surgery while Neil was in the house. She explains that she has a picture of the two of them on her nightstand as a reminder of her “why” for this season, before explaining which team she’s on, how things have gone, teasing that she got knocked out in her opening bout.

Three Days Until the Fight… 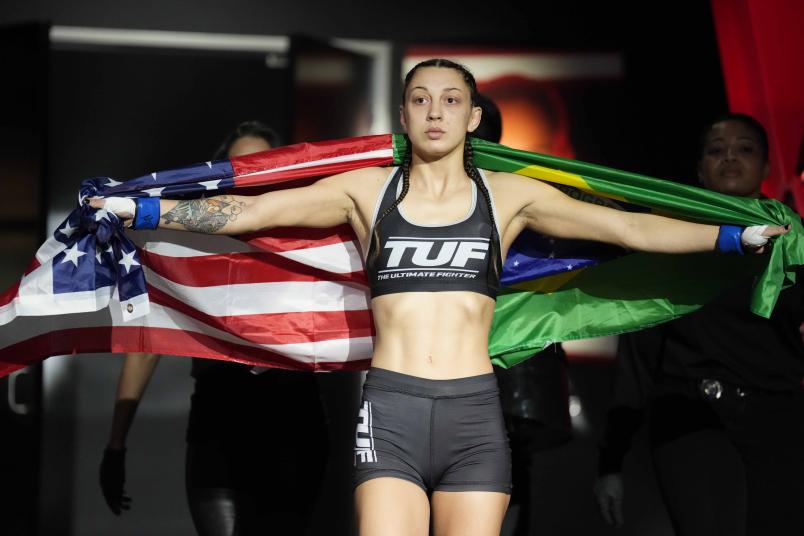 Miller goes through her fight prep at the UFC APEX, sparring with coach Wayne Gregory and explaining that she loves the matchup because Neil’s tendency to clinch should create opportunities for her to attack with her jiu jitsu.

The plan is to move forward and crowd Neil, with Miller suggesting she has a “secret move” she’s ready to break out if the fight gets into the clinch.

A Night Out in Vegas…

UFC President Dana White explains that after several long weeks being stuck in the house, he’s giving each team a night out, with Pena taking her team to see the Jabbawockeez perform, and Nunes and her crew hitting the Brazilian Jungle Grill.

Missed The First Few Episodes Of TUF? Find Out How You Can Catch Up Here

Both sides express how gratifying it was to be able to get out of the house, let off some steam, focus on someone else performing. Nunes gives every member of her team one of her UFC action figures, and everyone chows down, except Neil, who still has to worry about making weight for her fight with Miller.

Team Nunes’ Neil is up first and comes in at 125.5 pounds, while Team Pena’s Miller hits 125 pounds even, making the fight official.

The two face off, shake hands, and the last fight inside the house is set to happen. 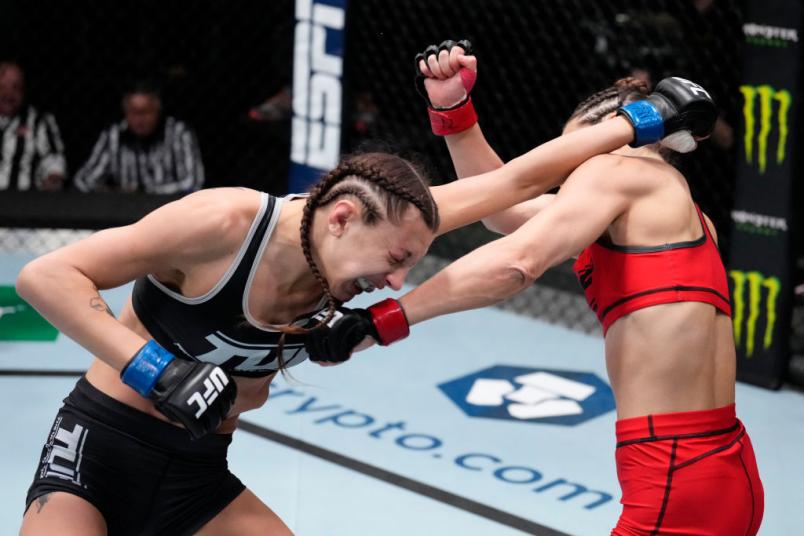 Season 18 marked the first time females competed on The Ultimate Fighter, with 16 bantamweights squared off in elimination fights.

After mauling Gina Mazany to earn her place in the house, Pena became the first overall pick of her close friend Miesha Tate before going on a run that included wins over veteran Shayna Baszler, and former opponent Sarah Moras to advance to the finale. Pena completed her historic run by finishing Jessica Rakoczy in the finale to become the first female winner of The Ultimate Fighter.

Miller and Neil depart for the UFC APEX, locked in and ready to punch their ticket to the finale. They get wrapped up, loosened up, and ready to go.

All that is left to do now is step into the cage and settle things. 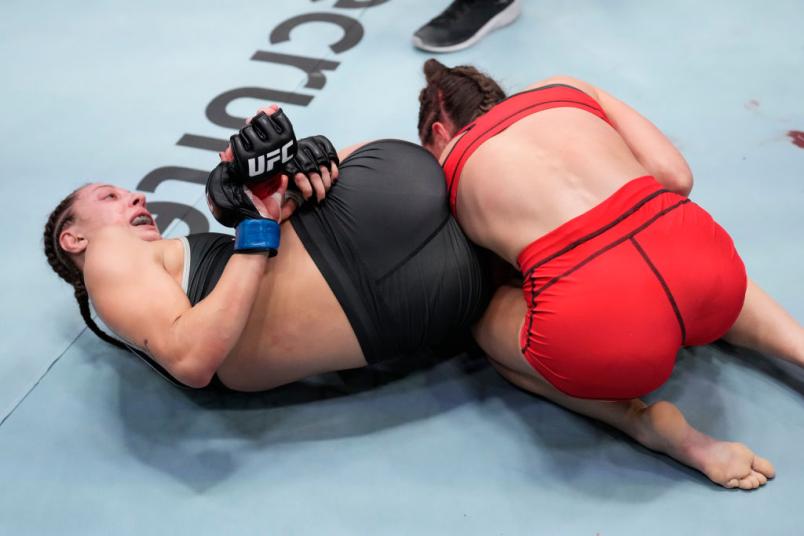 Round 1: Miller presses forward as expected, backing Neil into the fence, each fighter landing solid shots in the exchanges, with Neil doing well to clear off the cage quickly initially. Miller closes the distance and takes the back, kicking off the fence to get the fight to the canvas, maintaining her position as Neil tried to work free through the midway point of the round.

Miller lets go with punches from back mount while Neil fights the hands, doing everything she can to avoid getting choked. She works up to her feet, eating elbows on the way up, only to have Miller twist her to the canvas again and climb into mount. After unleashing elbows that opened up Neil, Miller attacks an armbar, forcing Neil to stack and maintain defensive posture for much of the final minute before getting off a couple punches at the very end of the round.

Round 2: Miller resumes her forward pressure, but Neil does a good job of keeping her off her for the first two minutes of the round, neither woman gaining much of an advantage. Miller finally closes the distance, secures a body lock, and trips Neil to the canvas in the center of the cage, landing in half guard and looking to pass. She moves to mount, climbing high and landing short elbows while again looking for an armbar setup.

When Neil bucks and bridges, Miller attacks the left arm, torquing it back in a modified kimura and drawing out the tap.

Just a dominant performance from Juliana Miller to advance to the finale!

The coaches and White recap the action, with the UFC President again singing the praises of the victorious Team Pena representative. Miller’s clear advantage in the clinch and on the canvas was just too much for Neil to overcome, and her patience in setting up her attacks on the ground were sharp, as she attacked with strikes to open up the submission opportunity.

Miller breaks down into tears heading back to the locker room, where she celebrates with her teammates, while Pena says she sees a lot of herself in her charge. Neil is understandably frustrated by her loss in the dressing room, but her team tries to lift her up and remind her that there is no shame in losing.

And now, it’s time for the finalists to face off inside the cage.

Miller and Walker stand in with Dana White in the lone Team Pena versus Team Nunes matchup before Team Pena heavyweights Pauga and Usman do the same.

The coaches then face off as well, with Nunes promising to take the bantamweight title back when she and Pena meet for a second time at UFC 277 on July 30. Nunes continues to chirp at Pena, who just repeatedly tells the Brazilian challenger to show up ready to fight this time.

The time in the house is now over, and all that’s left is the fighting.

First up, Julianna Pena defends her bantamweight title against Amanda Nunes at UFC 277 on Saturday, July 30 at American Airlines Arena in Dallas. The following weekend, the four TUF finalists get their turn in the spotlight when they return to the UFC APEX in Las Vegas to compete on the main card of UFC on ESPN.