Previously on The Ultimate Fighter…

Mohammed Usman of Team Pena advanced to the semifinals after coming out on top in a heated battle with Team Nunes’ Mitchell Sipe, dedicating the victory to his late son, Nash.

In another heavyweight quarterfinal, Team Nunes’ top pick, Eduardo Perez, bulldozed Bobby Maximus, getting the veteran out of there inside the opening round.

Now, the top heavyweight selections on each side face off to determine who will advance to meet Team Pena’s Zac Pauga in the finale.

This is The Ultimate Fighter: Team Pena vs. Team Nunes!

Usman and Helen Peralta chat while relaxing in the hot tub, discussing how there are martial artists and fighters. Peralta says she’s the latter, learning to become the former, while Usman explains that he went from being a football player and athlete that started fighting, and is now becoming a martial artist.

Inside the house, Perez chats with some of the other heavyweights about having his first pair of UFC gloves and wraps that he can frame and display in his house.

All Things The Ultimate Fighter

The front door opens and UFC welterweight champion Kamaru Usman, the older brother of the Team Pena heavyweight semifinalist, walks in with members of the coaching staff. Pena explains that she ran into Usman at a UFC event, asked if he wanted to come visit his brother, and the champ said yes, leading to this surprise visit.

“They brought my f***** brother,” Usman says, looking into the kitchen and seeing his sibling. He details how Kamaru was on Season 21 of the long-running reality TV competition, with video footage showing him walking out with his brother at the finale, where Kamaru defeated Hayder Hassan to win his season.

“He won the show, became The Ultimate Fighter, and ended up becoming the UFC welterweight champion of the world,” he says. “Pound-for-pound best fighter in the world. I’ve been soaking up a lot from him on this journey I’ve been on with him for a long time, and I feel like that’s why I’m so mentally strong.” 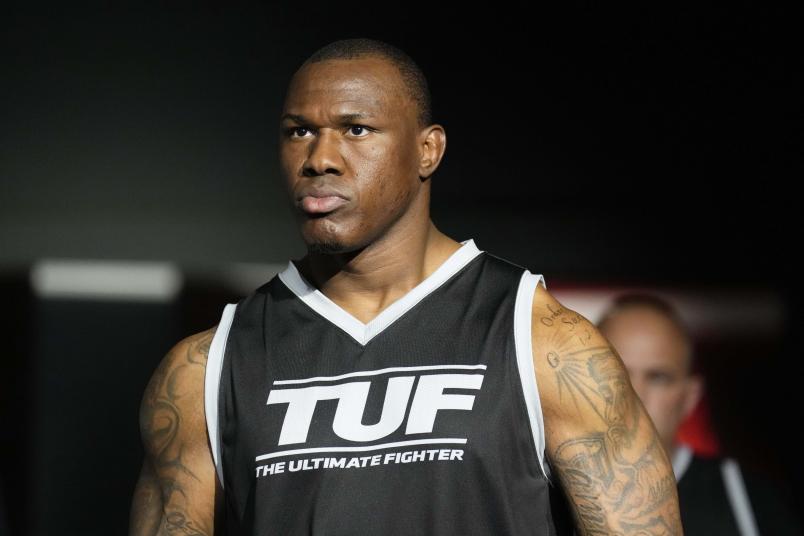 The brothers dip into Usman’s bedroom to have a quiet conversation. Big brother asks about his little brother’s first fight on the show, reinforcing the keys for his brother as he continues to progress in the season.

“He just reassured me that this is my time, and to go get it,” says Usman. “There is nothing stopping you from where you want to be.”

Usman sees his brother and the rest of the guests out, and the vibrant smile on his face shows how much that visit meant to him.

Three Days Until the Fight…

Nunes talks about the similarities between herself and Perez, and how she wants to do for him what her family and friends did for her on the way up.

The Team Nunes heavyweight goes through his fight prep, with his coach accentuating the biggest strengths of the big man’s game as footage rolls of him hitting pads and working with teammate Mitchell Sipe, who faced Usman in the quarterfinals.

Nunes points out that Usman has a tendency to move straight back, suggesting that if Perez continues to throw as he steps forward, switching stances, he could catch his Team Pena counterpart.

Back at the house… 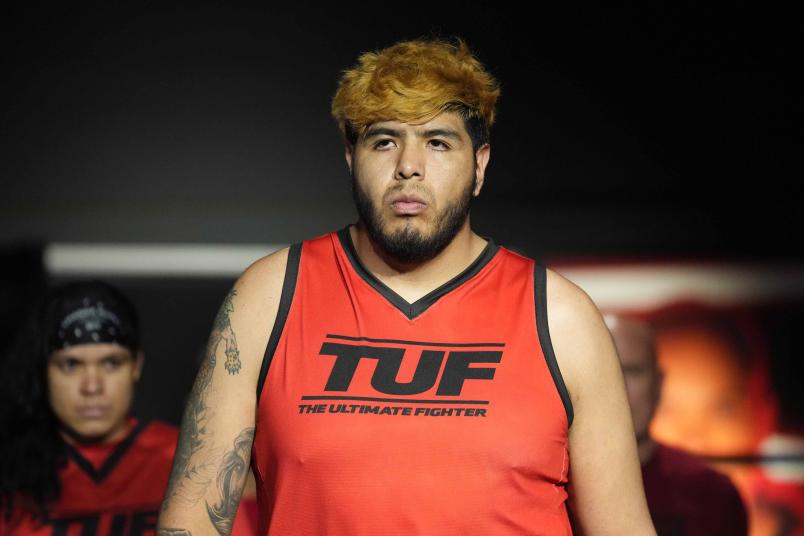 Perez talks with Nyle Bartling about needing to start quickly, admitting that he’s too relaxed and needs to get hit a couple times in order to get going. He says it happened in the fight with Maximus, which was his first appearance in seven months, and he’s hopeful getting that one out of the way will allow him to avoid a sluggish start against Usman.

Hanging out by the pool, Usman tells his teammates that he’s ready, laying out his ideas on how he needs to approach the fight and what he needs to do in order to secure the victory. He sees Perez’s quick win over Maximus as a detriment, and his own 15-minute battle opposite Sipe as a positive in his favor in this second semifinal pairing.

Missed The First Few Episodes Of TUF? Find Out How You Can Catch Up Here

Perez is confident that the quality of opposition he’s faced on the way to this point and his more technical striking will be the difference-maker in the matchup.

Usman has his call home, reaching out to his parents, who offer him encouragement, bringing him to tears. They all share how it has been a great struggle to get to where they are now, with his father making his son promise to be focused.

“Don’t forget where you’re from. Don’t forget you’re a strong man,” the patriarch of the Usman family tells his son. “You are there to win.”

At the UFC APEX… 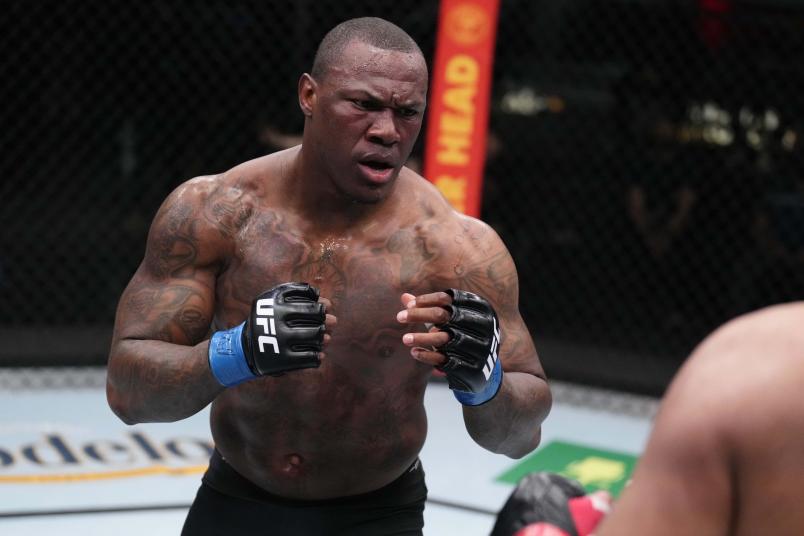 Usman goes through his fight prep, with the plan being to work behind the jab and turn this into a clinch battle, with Usman using his athleticism to overwhelm Perez, focusing on short, powerful bursts.

Perez is up first and comes in at 265 pounds, while Usman follows him to the scale, weighing 238 pounds.

The fight is official, the semifinalists face off, and now it’s time to get down to business.

Ten of the fights ended in finishes, culminating with Roy Nelson earning a first-round stoppage win over Brendan Schaub to become The Ultimate Fighter: Heavyweights champion.

Back at the House…

Perez gets his chance to call home, and is greeted by his family, explaining that he’s in the semifinals. He explains it’s the longest he’s been away from his family, recognizing that it’s difficult on them as well, since they’re such a close-knit family.

His dad advises him to use kicks, they all congratulate him on his success thus far and wish him luck the upcoming fight.

Usman and Perez make the trek to the UFC APEX, heading into their respective dressing rooms to get taped up and loosened up before stepping into the cage against one another, with a place in the finale hanging in the balance.

And now, it’s time to scrap! 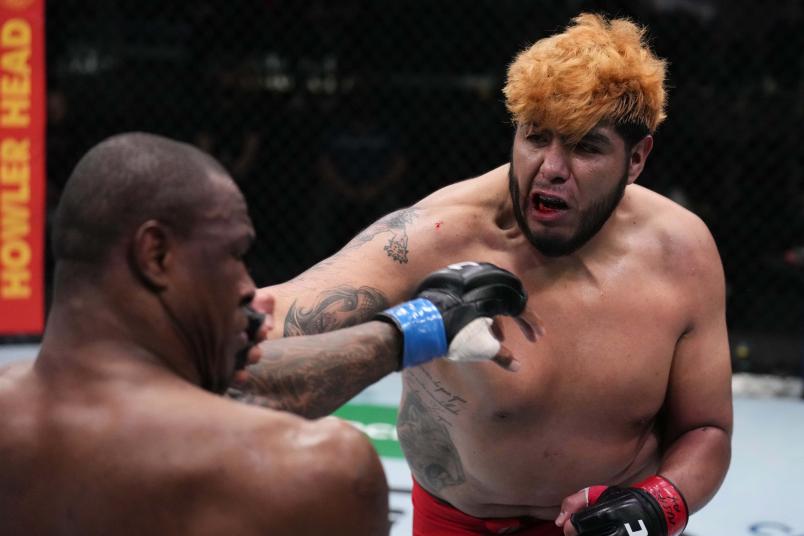 There is a pronounced size difference between the two, as Perez has four inches and thirty pounds on Usman, but the Team Pena fighter is first to land, connecting with an overhand right. Perez is clearly the more technical of the two, landing clean, precise shots from range, including attacking the lead leg of Usman.

Usman doesn’t shy away, but he’s also being kept at bay by Perez’s size, as the Team Nunes fighter continues chipping away with low kicks and long punches. The explosiveness of Usman gives Perez moments where he pauses and covers up, but he’s the superior fighter of the two through the opening round.

Watching at cageside, Dana White suggests to Forrest Griffin that Perez’s punches are starting to come a little slower, so it will be interesting to see if the pace and pressure really do start having a noticeable impact him heading into the second frame. 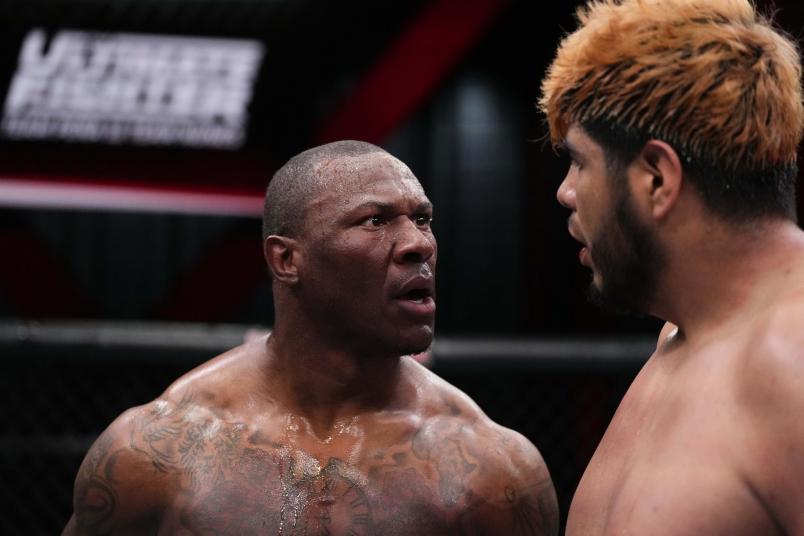 Usman takes the center and looks like the fresher of the two to start, coming forward at Perez, whose output has definitely diminished considerably. He’s still effective when he throws, but his shots are more labored and coming one at a time now, allowing Usman to gain momentum.

Usman closes the distance and elevates Perez, who grabs the fence to avoid the full impact of the takedown attempt. Perez has a brief positive offensive sequence, but Usman wears everything coming his way well and continues pressing forward, landing with winging overhand shots, clean jabs, and punches to the body.

Perez is clean and technical when he throws and lands, and each clean connection seems to fuel his output, as he finishes the round having a great deal of success. 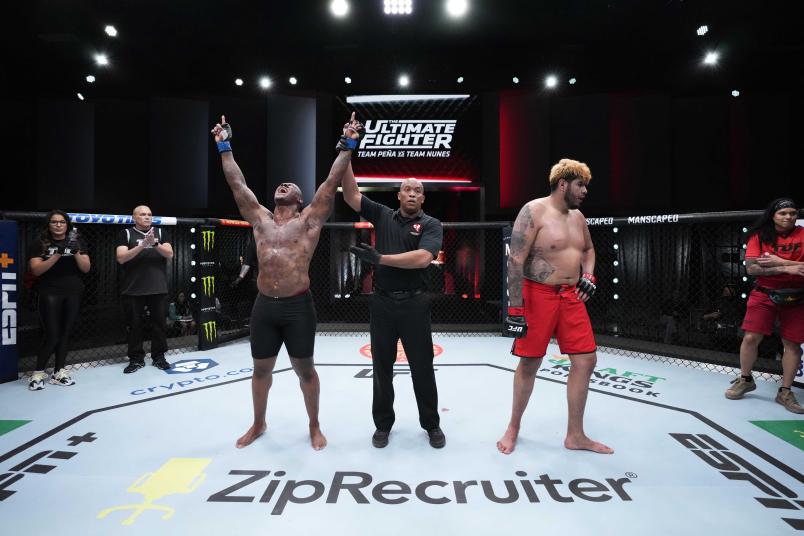 Perez looks for the long jab and Usman looks for the overhand right, with each man having some success. As successful as Perez is when he’s first and working behind his jab, he gives Usman opportunities to land and doesn’t always react well to the pressure and shots coming his way.

Perez continues to have success being technical and throwing first, but Usman is unrelenting, continuing to take everything he’s hit with and come forward, looking to force the issue. But he can’t get all the way in or land with enough force to really sway things in his favor. He lands a clean overhand right with a minute left in the fight, and other 300 seconds later, but Perez takes them well and we get the final horn.

Team Pena erupts in celebration, while Perez is in disbelief in the Octagon.

White and the coaches recap the action, with Pena citing Usman’s forward pressure as a key factor in the decision. White says he thought Perez out-landed Usman, with Nunes saying she felt he hesitated too much.

Usman proudly celebrates with his team, sharing laughs and hugs with Pauga, who he’ll face in the finale.

Perez returns to the Team Nunes dressing room, admitting that he was stuck in first gear a little. The coaches try to console him and his teammates try to lift him up, but he’s rightfully disappointed.

Three semifinals down, one to go!