Every debutant has a backstory that has molded them for a career in the UFC, one where one martial art tends to stand out; there is hype, expectation and the desire to stand out on a roster bursting with an infinite amount of world-class fighters.

Not every debutant is Mason Jones.

Three-sport black belt Jones, 25, an undefeated fighter from Blaenavon, Wales, boasts a perfect 10-0 record - during which time he’s only lost one round on the judges’ score cards.

The Welshman, who secured black belts in kickboxing and judo as a teenager before receiving his BJJ black belt at the age of 24, has commanded attention as a special talent having excelled at multiple martial arts and when he puts them all together so effectively, he’s a must-see fighter.

Jones has fought for his country in judo, he’s trained in Brazil with the best jiu-jitsu competitors around and domestically he’s medaled at judo, BJJ and kickboxing events all as stepping stones during his success-laden road to the UFC.

“I was doing a media day at the end of October and my manager Graham (Boylan) said I wasn’t going to need my Cage Warriors championship titles anymore, we’re going to take them off you,” said Jones.

“You won’t need them anymore, you’ve just been signed by the UFC,” Boylan told his fighter.

“I was ecstatic,” said the all-rounder, before adding: “It was a feeling I’ll remember for the rest of my life.

“It was something that I always knew was going to happen, it was inevitable for me, being in the UFC is where I belong. Knowing I’d made it to that stage, knowing I’m on that mountain and ready to start my climb, that’s what excites me the most.”

With a backstory that shows his strength in multiple sports, there’s a healthy dose of interest in Wales’ latest newcomer to the UFC ranks, and that is accentuated by The Dragon’s reign as a simultaneous two-weight Cage Warriors world champion (lightweight and welterweight) following the trajectory of one Conor McGregor.

How it started... How it’s going... pic.twitter.com/BeOE1iBcBI

“I’m going to write my own legacy and forge my own path,” said the 155-pounder.

“He’s (Conor) doing his thing and I’m going to do mine, but we’ll see what happens down the line when it’s time to put the gloves down.”

Jones is keen to talk about the matter in hand and his UFC debut which will take place at UFC Fight Island 8 on Fight Island in Abu Dhabi.

“It’s like paradise being here on Fight Island, it’s something I’ve wanted to experience as a fighter since the first show here and being on the triple-header to start the year is a massive achievement in itself.

“We’ve got our own training room which is available 24/7 and there’s a public gym we all share. I’ve been getting my running in early, checking my weight, doing a little bit of BJJ, hitting the pads in the afternoon around the same time as my fight will be and then some yoga to cool down.”

“Mike is going to come out to fight me, I’m going to go out to fight him. It doesn’t matter who it is to me, I’m going out there to destroy whoever is put in front of me,” said the UFC newcomer who is aiming to steal the show in his first outing with the company.

“Whether Mike is in top form or second form he’s going to get dismantled and I’m going to stop him within two rounds.” 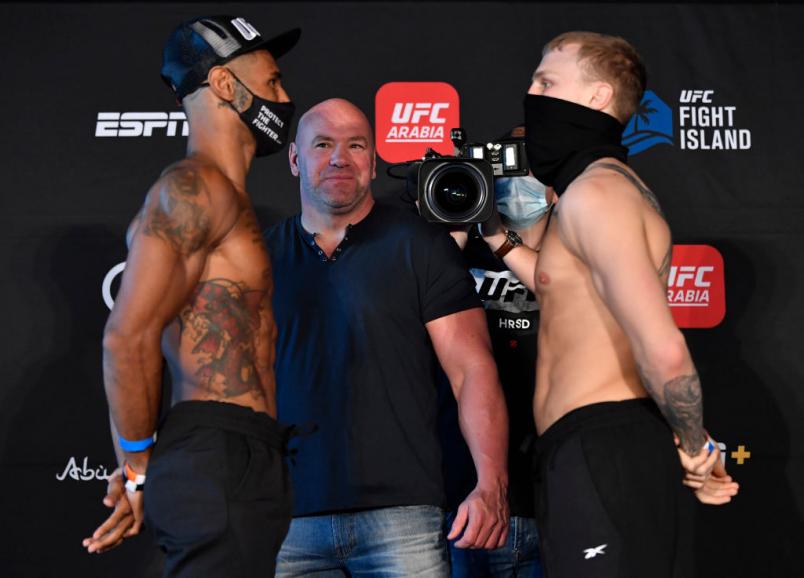 This degree of confidence is a by-product of his footing as a standout mixed martial artist, and every time he’s gone out there so far, he’s emerged victorious and lived up to the high standards he sets for himself.

“Mike is a dangerous striker, he hits hard, he’s got good jiu-jitsu and good wrestling; I’m going to show that I’m better than him in all these areas.

“My aim is to be the best in the world. I never go out there just to beat people; I’ve always gone out there with a task and that’s me destroying, decimating and dismantling my opponents.”

The language is alarmingly strong. However, it’s keeping with a sense of self-belief and confidence that has been built through years of success in martial arts and, to date, all the lofty ambitions and bold pre-fight plans have been more than met in the cage.

But now, his place of work is an Octagon.

“I’ve got four TKOs to my name, three submissions and three decisions, and those three decisions were just learning experiences for me. I’m going to be going up against the best in the sport now and I see this as almost a restart for my career. It’s a new chapter, a whole new level and I’m ready for the Octagon.

“I’m going to make sure that I continue to add to the KO/TKO column and submission column rather than decisions.”

As always, Jones has pushed himself to his limits in his training camp, but recently made the time to take up a rare opportunity to help other aspiring fighters in his country.

“We’ve pushed hard in training, I’ve been able to get partners in, and we’ve done everything by the book in terms of restrictions and everything.”

Besides training and his ever-growing media commitments, all while retaining his razor sharp focus on his debut, Jones jumped at the chance to speak to young members of the Welsh national judo team about the role of judo in his life and the importance of setting your own goals and chasing them - not chasing others.

“I’m an ex-Welsh team member, I’ve been through what they’re trying to do and so one of the coaches got in touch with me to talk to them about my experiences. 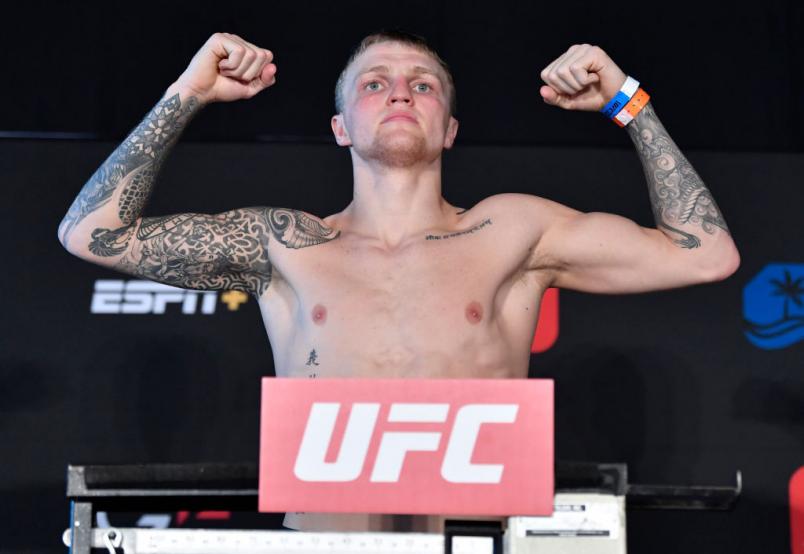 Mason Jones poses on the scale during the UFC weigh-in at Etihad Arena on UFC Fight Island on January 19, 2021 in Abu Dhabi, United Arab Emirates. (Photo by Jeff Bottari/Zuffa LLC)

“I did a video call with the squad and it was something I enjoyed; anything to support educating people on the subject of mental health is something I support. There’s a lot of people struggling in these times, but we can all help each other.”

The proud Welshman, who will have a Welsh flag glued to him for his entrance and the post-fight aftermath, aims to accelerate his road to glory in the UFC by being himself, which he believes will set him apart and make him a breakout talent in 2021.

“Stylistically I already stand out from everyone; my fights are high-adrenaline, action-packed and my personality will shine through.

“I’ve got to beat Mike Davis before I look at other fighters in the division and future bouts. I’m going to knock him out, I’m convinced of that, but you never know what can happen on the day. I don’t want to look past someone; I’m going to show the best version of me in the Octagon.”

Jones signed off with a message to UFC fans who haven’t watched him compete before and explained why they should be excited for his arrival.

“I make sure I outwork my opponents and that my fights are exhilarating from start to finish.

“A Mason Jones fight is always an exciting fight, fans enjoy watching me, so it’s about all bringing that package to the UFC and showing the U.S. and the world exactly what I can do.”