On Dec. 30, the UFC’s customary end of year bash takes place at T-Mobile Arena in Las Vegas, with Cris Cyborg defending her UFC women’s featherweight crown against former bantamweight queen Holly Holm in the main event of UFC 219. To get ready for the final event of 2017, we’re going to look back at five of the UFC’s most memorable year-enders, starting with the UFC 66 card featuring future Hall of Famers Chuck Liddell and Tito Ortiz. 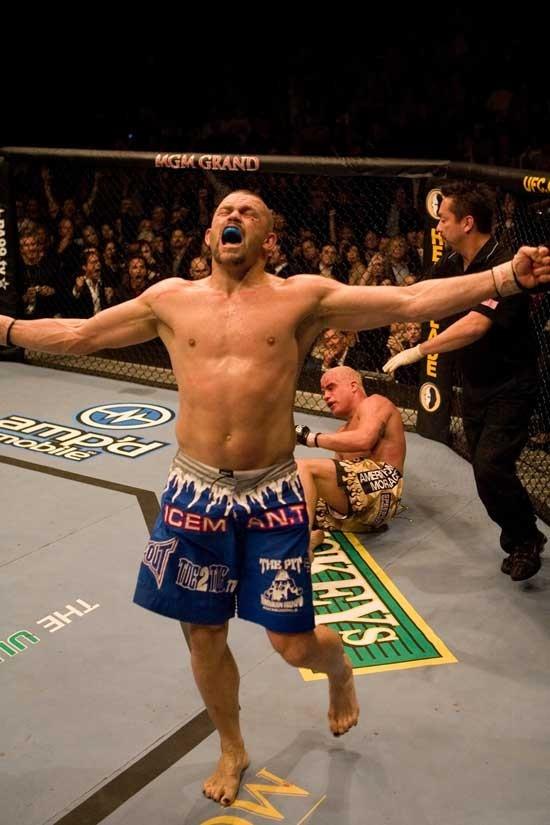 As 2006 came to a close, there was no bigger fight in the world of mixed martial arts than the rematch between UFC light heavyweight champion Chuck Liddell and former titleholder Tito Ortiz, making it a natural for the main event of the card taking place on the second to last day of the year.

Once friends and training partners, but now rivals, the future Hall of Famers met first at UFC 47, with Liddell halting Ortiz in the second round. But that was in April 2004, a year before the MMA explosion kicked off by the Ultimate Fighter finale bout between Forrest Griffin and Stephan Bonnar in 2005.

In 2006, the UFC was getting mainstream attention, and a lot of that attention focused on the Mohawk-wearing knockout artist from San Luis Obispo, Liddell. After his first win over Ortiz, “The Iceman” wreaked havoc on the 205-pound weight class, knocking out Randy Couture (twice), Jeremy Horn, Vernon White and Renato “Babalu” Sobral.

Ortiz was busy as well, defeating Patrick Cote, Vitor Belfort, Griffin and Ken Shamrock (twice) en route to the rematch, one he approached a lot differently than the first.

“The first time we fought I was in an unhappy place and I didn't want to fight,” said Ortiz. “Now that times are better, I want to get back in the Octagon and continue to dominate.”

Not surprisingly, the lion’s share of attention was on the main event, one of the biggest fights in UFC history. But there was quite a bit of intrigue on the eight-fight undercard, which featured the original Ultimate Fighter, Griffin, against a season two standout in Keith Jardine, and season three winner Michael Bisping, who was making his first post-TUF start against Eric Schafer.

“The Count” would win that night, halting Schafer at 4:24 of the first round, but “The Dean of Mean” pulled off a stunning upset, stopping Griffin in the opening frame as well.

“It made me question myself and what kind of fighter I’m gonna be,” said Griffin of his most crushing defeat. “I thought my chin was a little better than that. It kinda makes you wonder.”

Griffin didn’t have to worry, as he would be wearing championship gold by July 2008, when he defeated Quinton “Rampage” Jackson for the UFC light heavyweight title. Bisping, still fighting at 205 pounds at the time, had to wait a little longer, as he didn’t strike gold until June 2016, when he knocked out Luke Rockhold for the UFC middleweight crown.

As for the main eventers of the card that also featured victories by Andrei Arlovski, Thiago Alves, Gabriel Gonzaga, Jason MacDonald, Christian Wellisch and Yushin Okami, it was the same knockout result for Liddell, despite a courageous stand by Ortiz. Here’s how we called it that night in Las Vegas…

Tito Ortiz came to fight tonight, and as he admitted afterwards, he brought his ‘A’ game. But when you’re facing the best light heavyweight on the planet, sometimes that’s just not enough, as Chuck Liddell defended his UFC crown for the fourth time with a third round TKO of Ortiz before a sell-out crowd of 14,607 at the MGM Grand Garden Arena in their long-awaited rematch.

“This is the most satisfying win of my career,” said Liddell who knocked Ortiz out in two rounds in their first bout on April 2, 2004. 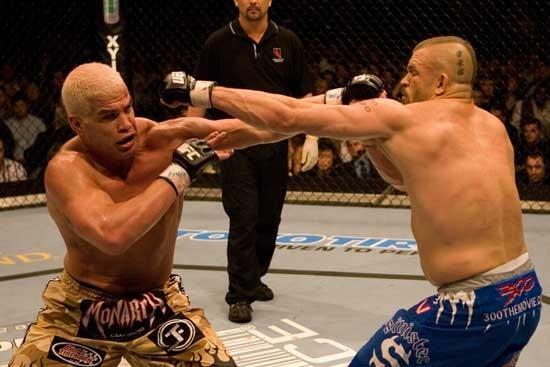 But even though Ortiz, a former UFC light heavyweight champion, showed courage and improved stand up in the UFC 66 main event, it just wasn’t enough to answer to the power of Liddell.

“I’m kind of disgusted with myself because I let my fans down,” said Ortiz. “Chuck’s the best pound for pound fighter in the world and I’ve got to give that to him.”

Ortiz opened the action 30 seconds in with a leg kick and seconds later ate his first thunder from Liddell, who shook off a follow-up takedown attempt. Ortiz continued to move forward as Liddell calmly countered Ortiz’ offensive rushes. Midway through the round Ortiz found success with his leg kicks and Liddell began to move forward more purposefully, drawing a roar from the crowd as he cut a retreating Ortiz over the left eye and moved in for the kill. Moments later it appeared that the end had arrived as Liddell put the challenger on the canvas with a left to the temple and pounded away furiously with both hands as referee Mario Yamasaki watched the action closely. Incredibly though, Ortiz survived the onslaught and made it to his feet and the crowd erupted as the bell rang.

Almost immediately going for the takedown to begin the second, Ortiz was again rebuked as Liddell avoided the mat with chants of “Chuck, Chuck” reverberating through the arena. Perhaps looking to conserve energy for the later rounds, the fighters’ pace soon became more measured, though each punch was still being thrown with fight-ending intent. With under a minute to go, Ortiz finally got Liddell to the mat, but ‘The Iceman’ easily made it back to his feet and out of danger to ride out the round.

Ortiz’ customary early round takedown attempt in the third was turned away yet again, but this time Liddell jumped in and flurried on the grounded challenger. But ‘The Huntington Beach Bad Boy’ again showed no fear of the champion as he swung back with a hard haymaker. Ortiz’ ineffectiveness securing takedowns was proving to be his downfall though, as Liddell took every opportunity to make the challenger pay every time he missed one. With under two minutes to go, Ortiz made his final mistake as he attempted to get into a firefight with Liddell and paid for it, as the champion sent his challenger to the canvas, where a final barrage forced Yamasaki to halt the bout at 3:59 of the third stanza.

“I had him hurt and I just kept throwing punches,” said Liddell, who led on one scorecard 20-18 at the end of two rounds, with the other two judges seeing the bout even at 19-19.