On Dec. 30, the UFC’s customary end of year bash takes place at T-Mobile Arena in Las Vegas, with Cris Cyborg defending her UFC women’s featherweight crown against former bantamweight queen Holly Holm in the main event of UFC 219. To get ready for the final event of 2017, we’re looking back at five of the UFC’s most memorable year-end shows. Today, it’s UFC 168, headlined by a pair of rematches that captivated the MMA world.

The rematch…There’s nothing like it in the world of combat sports, simply because the questions surrounding one are endless. Was the first one a fluke? What did the loser of the first fight do to change the result the second time around? What outside forces played a role in the result of either fight? Is the winner of the initial bout overconfident heading into fight two?

So needless to say, there were a lot of things to talk about when UFC 168 came around because there wasn’t one rematch at the top of the bill, but two.

In the main event, Chris Weidman looked to repeat his shocking win over Brazilian icon Anderson Silva, and in the co-main, it was Ronda Rousey resuming hostilities with Miesha Tate.

On paper, the fights were polar opposites, but equally intriguing. Weidman and Silva had no bad blood between them, but the world was waiting to see if Silva was still “The Spider,” still able to take control of a division he had ruled since 2006. In their first bout five months earlier, Silva dropped his hands to showboat and the New Yorker pounced, knocking Silva out, taking his middleweight title and handing him his first loss as a UFC fighter. So there were some who believed Weidman got lucky, taking advantage of a foolish mistake by the champion. Weidman didn’t buy into such talk, and he had another five rounds to show that he was the true king at 185 pounds.

As for the co-main, Ronda Rousey was the undisputed star of women’s MMA and the queen of the bantamweight division, despite having only fought and won once in the Octagon. But between her pioneering win over Liz Carmouche and her UFC 168 bout, she and Tate were in the nation’s living rooms every week as rival coaches on The Ultimate Fighter. And if their first fight in 2012 (won by Rousey) wasn’t enough to keep them from sending Christmas cards to each other, six weeks in Las Vegas certainly did the job. So if Weidman-Silva didn’t have that bad blood heat, Rousey and Tate made up for it, making for one doubleheader all fight fans wanted to see. Here’s how we reported on both fights in Vegas that night, one where no one could have seen what happened in the main event coming. 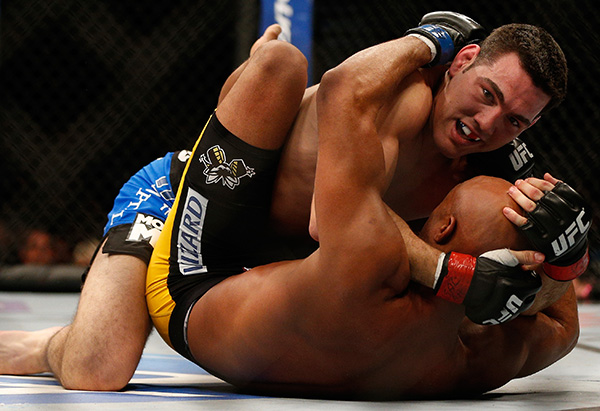 The highly anticipated rematch between UFC middleweight champion Chris Weidman and Anderson Silva met an abbreviated end Saturday night at the MGM Grand Garden Arena, with an injury to Silva’s left leg forcing a second round stoppage in the main event of UFC 168.

“He’s still the greatest of all-time,” said Weidman, who was awarded the second round TKO victory in a bout that was shaping up to be a classic before its sudden finish.

It was a night of surreal events, with Silva walking to the Octagon first for the first time since his 2006 challenge of Rich Franklin for the middleweight title. But once he stepped through the gate, it was as if he was back home again. He did have to wait for the champion though, and boos greeted the Long Island native, whose entrance song, Tom Petty’s “I Won’t Back Down,” was more than appropriate as he prepared to face “The Spider” a second time.

And he didn’t, meeting Silva in the middle of the Octagon and firing off a front kick before scoring a takedown a little less than 30 seconds into the fight. Silva rose quickly, but with Weidman attached to him. Silva fired off knees at Weidman, but the champion responded with a right hand that dropped the Brazilian. Weidman unleashed ground strikes in an attempt to finish, but Silva took the shots well and tried to work from the bottom position as the New Yorker stayed busy with strikes and neck crank attempts. Silva did get off some shots from his back, bloodying the champion, but when the bell rang, it was clearly Weidman’s round.

Silva opened round two with a leg kick, clearly looking to slow Weidman’s forward motion as he got into a standup rhythm. Weidman responded with a thudding kick to the midsection, but when Silva fired back a left kick, Weidman checked it and Silva’s leg broke in the process. Silva immediately fell to the canvas, with referee Herb Dean intervening at the 1:16 mark, a result eerily reminiscent of Corey Hill’s identical injury in his 2008 bout with Dale Hartt. Hill would make a full recovery and fight again, but it’s obviously too early to tell whether the same will be true for the legendary future Hall of Famer. 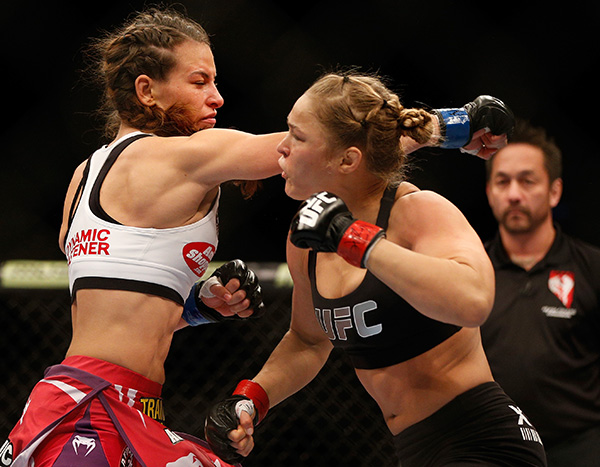 Ronda Rousey can go more than five minutes in a fight. After seven first round finishes in seven pro fights, she went into the third stanza Saturday night at the MGM Grand Garden Arena, but the result was the same in the UFC 168 co-main event, as she defeated heated rival Miesha Tate via armbar submission to retain her UFC women’s bantamweight crown.

“I have no excuses,” said Tate, who lost her Strikeforce title to Rousey in 2012 and coached against her on The Ultimate Fighter 18. “She was the better fighter tonight.”

Rousey had to dig deep to get the win though, fighting off a spirited effort from Tate throughout.

After a fierce exchange to open the bout, Rousey quickly closed distance and locked up with Tate. The challenger was able to elude the takedown, but she still ate some hard shots as the two locked against the fence. Moments later, the bout strayed to the mat, and Tate went for a triangle choke, only to be rebuffed by Rousey. A subsequent scramble saw Tate get her own takedown, but then Rousey went to work from the bottom as she tried to lock in her own triangle choke, all the while firing punches at her rival. Just before the two minute mark, Tate escaped, and as the two stood, Tate landed several hard shots to the face until Rousey got close and tossed the challenger to the mat. Rousey looked for her trademark armbar, but Tate got loose and stood, only to get tossed to the canvas once again. After a brief stalemate, the two rose again, with Rousey locking Tate up against the fence until the bell – the first time Rousey had ever been a full round in her career.

Tate smiled at Rousey before the start of round two, aware that her opponent was entering foreign territory, and her confidence was evident as she landed upkicks on Rousey early on. Another thunderous toss put Rousey back in control, but Tate escaped once again. This time, Rousey put Tate back down immediately, and even with the crowd chanting “Miesha, Miesha,” Rousey was able to nullify Tate’s attacks while pinning her to the fence, slowing things down to a manageable pace before yet another throw. This time, Rousey made a concerted effort to take Tate’s arm, but the resilient challenger wouldn’t go away quietly, even when caught briefly with under 90 seconds left. Rousey wouldn’t give up positioning though, with ground strikes being her main line of attack until the bell.

Rousey emerged from her corner for round three with her mouth wide open, but she was still able to push Tate to the fence and hold her there until she was able to drag her to the mat. There, Rousey quickly sunk in her armbar, and it was all over, with Mario Yamasaki intervening at the 58 second mark. Tate immediately extended her hand to Rousey following the finish, but the champion turned away, making it clear that this rivalry had not ended, drawing boos from the packed house which drowned out Rousey’s post-fight interview.

But it didn’t matter. Once again, her fight game had the last word.