On Dec. 30, the UFC’s customary end of year bash takes place at T-Mobile Arena in Las Vegas, with Cris Cyborg defending her UFC women’s featherweight crown against former bantamweight queen Holly Holm in the main event of UFC 219. To get ready for the final event of 2017, we’re looking back at five of the UFC’s most memorable year-end shows. Today, it’s UFC 141, headlined by two of the biggest stars to hit the heavyweight division.

Usually, when a high-profile main event is announced, you get a general idea of what’s going to happen. For example, when looking at next week’s UFC 219 main event, Cyborg and Holm are two of the top female fighters of all-time, they’re both coming off impressive wins, and they’ve both been fairly active leading up to the fight. Throw in an intriguing style matchup, and it’s safe to assume that we’re going to see a heck of a fight on Dec. 30.

Yet when the UFC 141 main event between Brock Lesnar and Alistair Overeem was announced in 2011, there were more questions than answers. Yes, both were accomplished fighters at the elite level and two of the most intimidating physical 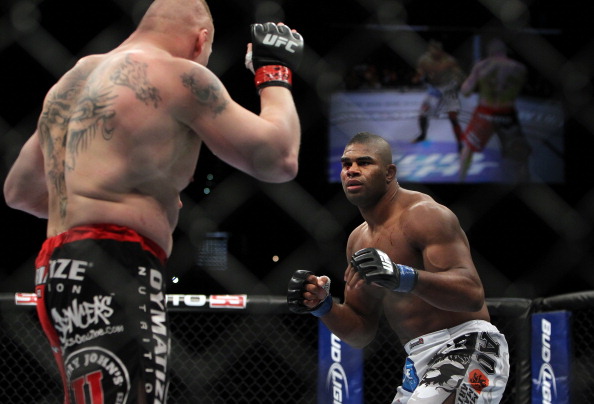 forces to compete in MMA. But Lesnar, the former UFC heavyweight champion, had been on the shelf for over a year as he fought a battle with diverticulitis, so who knew what he would have in his return. And Overeem, while active and winning titles in K-1, Strikeforce and DREAM, had never fought in the UFC before, so we were about to see what he brought to the table when facing the best of the best in the Octagon.

The funny thing is, all these questions built even more anticipation for this fight, which headlined a card that also featured Nate Diaz’ win over Donald Cerrone, Johny Hendricks’ victory over Jon Fitch, and Alexander Gustafsson’s stoppage of Vladimir Matyushenko. It wasn’t the most star-studded show the UFC put on for a year-end event, but the attention afforded Lesnar and Overeem more than compensated for it.
More Classics in The End of Year Rewind: UFC 92 | UFC 79 | UFC 66

Before the fight, I spoke to Lesnar and asked why he would take such a tough fight for his return when he could have understandably taken a less risky bout after dealing with such a serious illness. Where does an attitude like that come from?

“I was born this way,” he fired back. “I was born a bad mother**ker and that’s who I am. It ain’t an act, and it’s not a line. There’s nobody out there like me. I was born to do this, and I’ll fight whoever they put in front of me. I’ve proven myself over and over again that this is my way of life. Where does it come from? I don’t know, it’s just who I am.”

It was typical Brock, and when you consider that the opponents in his previous six UFC fights were Cain Velasquez, Frank Mir (twice), Shane Carwin, Randy Couture and Heath Herring, returning to face Overeem was no surprise.

As for Overeem, clashing with a former UFC heavyweight champion in his first UFC fight was business as usual for “The Demolition Man,” whose December 2011 calendar was a lot less hectic than the one in December 2010.

“Last year I had four fights in one month – the K-1 tournament and the Dream title fight – and a lot of media stuff in between and a lot of distractions,” he said. “Compared to December of 2010, this is a walk in the park.”

Turns out that it would be for Overeem, who turned the highly anticipated showdown into just another win, as he dominated Lesnar en route to a first-round TKO that took just 2:26. After the fight, Lesnar retired, even though he would return to defeat Mark Hunt at UFC 200 four and a half years later. Overeem is still among the top heavyweights in the game, and while a loss to Francis Ngannou was a setback, he recently let the world know that it was only a temporary one, as he’s already back in the gym and preparing to make another run at the heavyweight title.