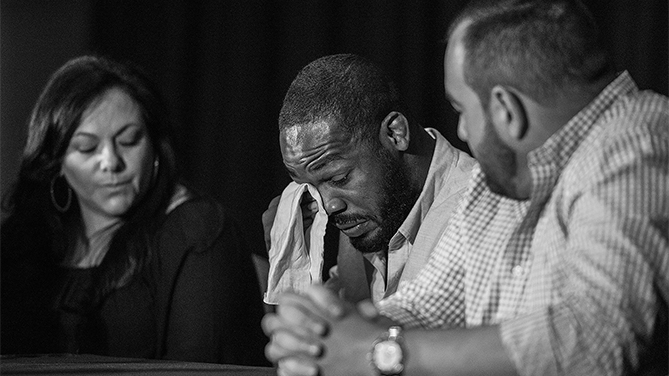 The morning after his removal from Saturday’s UFC 200 main event against Daniel Cormier due to a potential anti-doping violation, interim UFC light heavyweight champion Jon Jones addressed the media at MGM Grand, and was clearly contrite for the situation while also denying any wrongdoing.

“The whole situation really sucks, it really hurts a lot,” Jones continued. “I have no clue what it is. I’ve been taking the same supplements the majority of my career. I’m extremely against performance enhancers, and the whole thing sucks because being labeled as someone who cheats hurts me more than anything else.”

Clearly emotional, leaving the dais at one point and then being overcome by tears once he returned, the 28-year-old New Yorker vowed to fight on.

“My attitude is just to continue to fight,” he said. “I’ll just try to be optimistic and positive about the situation and just figure out what good can come from this in my personal life. I’ve put in a lot of work to get back to this point and I feel like I have to re-climb a ladder.”

Manager Malki Kawa said that the B sample of Jones’ test will be tested in Salt Lake City today, noting that his client has been tested eight times since December, passing all except the one taken on June 16. Jones faces a potential two-year suspension, and it’s a possibility he has come to grips with.

“If I do have to sit out for two years, I’ll definitely be back,” Jones said. “I’m optimistic. At the end of the day, I’m a fighter, and even though I’m breaking down here, I’m not broken. I’m just really upset. I’ve been through a lot to get to this point, so I’m not going to let this slow me down.”

The youngest champion in UFC history, Jones won the light heavyweight crown in 2011 and successfully defended it eight times before being stripped of the belt in 2015 due to legal issues stemming from a hit and run accident in his adopted hometown of Albuquerque, New Mexico. Jones rep Denise White noted that this possible violation “has no impact on his probation.”

Returning in April of this year, Jones won the interim 205-pound crown with a victory over Ovince Saint Preux. Yet his opportunity to redeem himself and take the undisputed title once more in a rematch with Cormier -- whom he defeated in January of last year -- will not take place this weekend, and is now in limbo for the future, pending Jones’ appeal.

Kawa is confident that the pound-for-pound king will be exonerated of any wrongdoing.

“The last 24 hours was a whirlwind,” Kawa said. “We’re here to deny this, apologize for the situation, and we’ll do what we have to do to fight this. He’s been very outspoken about this stuff and he didn’t cheat or try to do anything wrong. He (Jones) is a little emotional about it, but we’re going through the process step-by-step and taking it day by day.”

“I would never take anything that would enhance my game,” Jones added. “I wouldn’t cheat.”