Josh Emmett wasn’t happy with a split decision loss to Desmond Green in April, the first defeat of his professional career. But as he sits a day away from his first UFC co-main event against No. 3-ranked featherweight Ricardo Lamas on Saturday, he may want to thank judges Doug Crosby and Sal D’Amato for scoring against him that night in Buffalo.

“If I didn’t lose that split decision, then I’d still be at 155 and I wouldn’t be in the position I am right now,” said Emmett, who stepped in on short notice to replace Jose Aldo against Lamas, taking advantage of his biggest opportunity yet.

“With a win over Lamas, I think I’ll be right there in title contention,” said the former lightweight. “It also depends how my performance goes. If I can get a finish over Lamas and do what the former champion (Aldo) and the current champion (Max Holloway) couldn’t do to him, you never know what’s gonna happen in this sport. When the stars align and who’s out and who’s in, opportunities present themselves, and that’s the reason why I took this fight because the same opportunity won’t come around twice.” 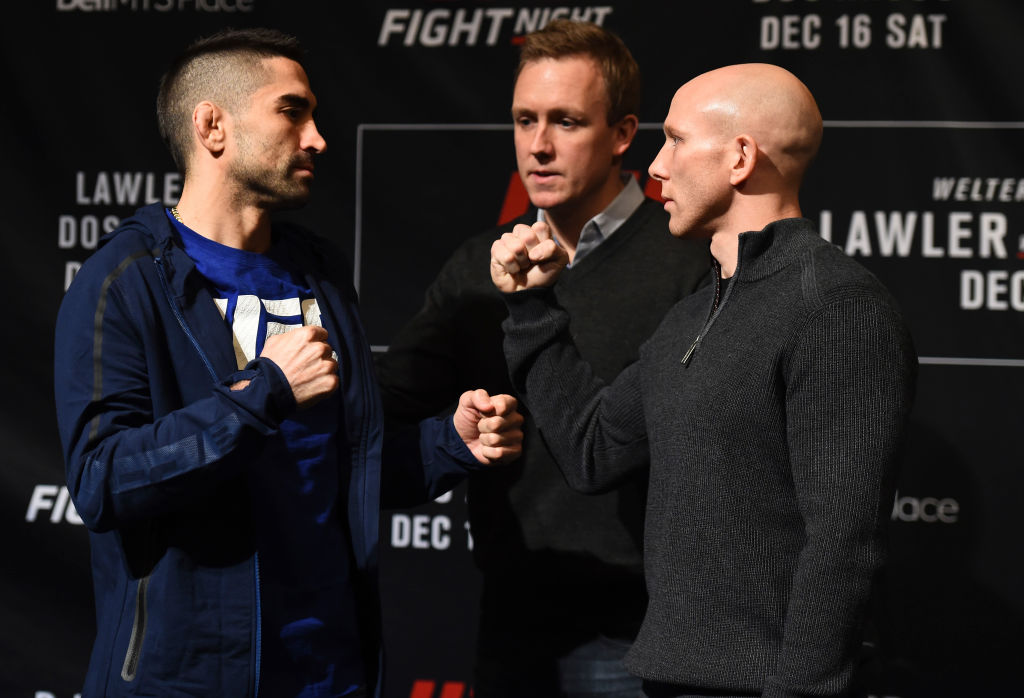 That doesn’t mean it was easy, as making weight at 155 was a task, let alone hitting 145 on a few weeks’ notice, but then again, the 32-year-old Californian hasn’t been one to take the easy road to anything. A pro since 2011, Emmett has been training with the Team Alpha Male squad in Sacramento for 12 years, seeing plenty of UFC fighters come and go during that time. And while he built up a stellar record on the regional scene, the call from the big show wasn’t coming.

“I’ve gone through so much adversity with injuries and all this other stuff – almost getting in the UFC, almost getting on The Ultimate Fighter - and nothing ever worked out for me,” he said. “I was debating whether I was going to keep doing this because I only wanted to fight in the UFC. I got offers to fight in other big promotions, but it was UFC or nothing for me. It’s been a crazy journey, and I wouldn’t change anything. I got no handouts, nothing’s been given to me, so it’s gonna be that much sweeter when I make it to the top and I did it all on my own.”

nothing’s been given to me, so it’s gonna be that much sweeter when I make it to the top and I did it all on my own

He got less than a week’s notice for his UFC debut, as he stepped in for Nick Hein against Jon Tuck. Add in a trip to the Netherlands for the bout, and the odds were stacked against him, but he delivered a gritty three-round win that immediately established him as a fighter to watch. And while he won another UFC bout at lightweight against Scott Holtzman, the loss to Green made him decide that to give himself the best opportunity to chase a title, featherweight would be the place to do it in.

“My whole goal all along, once I got into the UFC, was to fight at 145, but since I was doing well and I got in at ’55, I was staying there because everything was working out well for me,” he said. “But with that one loss that I had in New York, and I still think I won that fight, that’s the only good thing I took away from that. It made me reevaluate things and decide to make the cut to 145.”

In October, he defeated Brazil’s Felipe Arantes, and while he wanted a spot on last weekend’s UFC Fight Night card in Fresno, a co-main event against one of the division’s elite isn’t a bad substitute

“I’m super grateful,” Emmett said. “I wanted to get on the Fresno card just because it’s three hours from Sacramento and it would be nice because I would have so many friends, family and fans from there to pack that place. But obviously I’m in a much better position now, so it all worked out. This is a great opportunity for me. I’m fighting the third-ranked guy in the world and I’m the co-main event, so it’s awesome how I go from the co-main event on UFC FIGHT PASS to the co-main event on the main card. I can do that.”