Elliott Scrapping his Way to the Top

"I’ll fight whoever they want me to fight and in order to get a title shot, you have to keep winning." - Tim Elliott 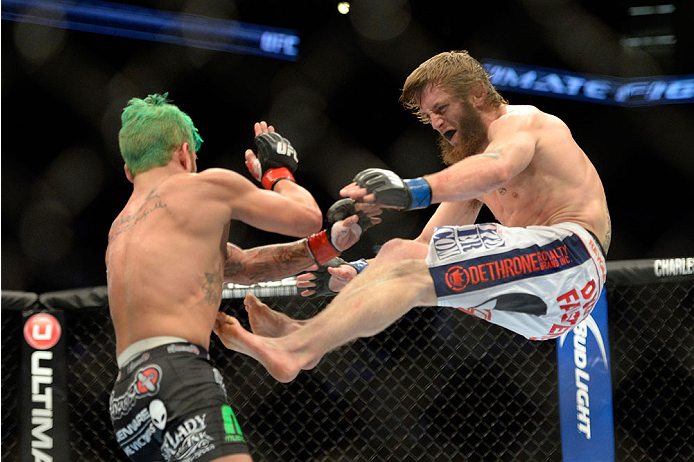 The flyweight division is still very much taking shape and Tim Elliott is looking to capitalize on the situation.

The scrappy 26-year-old has ascended the 125-pound divisional hierarchy in quick fashion as he’s collected back-to-back impressive victories over tough competition. The bearded Grindhouse MMA product picked up his first win inside the Octagon with a Fight of the Night victory over Jared Papazian at The Ultimate Fighter 16 Finale in December of 2012, then followed it up with another successful showing against the always tough Louis Gaudinot at UFC 164 back in August.

“It was great to get the win but I really would have liked to have gotten the finish,” Elliott said. “I was trying to finish the fight, and the opportunities were there, but I didn’t capitalize on them. I’ve been working on trying to put a little more power behind my punches to make me a better finisher, but a win is always a good thing. It has me in a great place now where if I win my next fight I’ll be sitting pretty good in the title picture.”

Those wins, in addition to the relative lack of depth in the upper-tier of the flyweight collective, have Elliott on the verge of breaking through into the next level of competition in the weight class. At the present time he’s still a prospect of the highly touted variety, but another solid showing complete with a victory will have him trading in that particular label and taking a seat at the contender’s table.

While his status in the upper-tier hasn’t fully materialized, the head of steam he’s built has certainly become noticeable.

“I have felt that way since my very first fight,” Elliott said in regard to gaining momentum. “I know I lost, but I had a really good showing and I think that was my best performance to date. I don’t think I’ve shown anything more in my last two fights than I did in my UFC debut against Dodson. I feel really good about things and believe I’m in a good spot right now with the UFC.

“I think this fight will put me in a good position for a title shot, but realistically there are probably at least one or two people in front of me. I’ll fight whoever they want me to fight and in order to get a title shot, you have to keep winning. It doesn’t really matter who I fight because as long as I keep winning I will get there.”

While a victory in his next fight complete with a leap to title contention seems ideal, the obstacle blocking his entry into the next level is nothing to gloss over. The Kansas native will face fellow prospect - and equally highly touted at that - Ali Bagautinov in his next showing, which will come this Saturday at UFC 167.

The heavy-handed Dagestan native is coming off a successful Octagon debut as he defeated Marcos Vinicius at UFC Fight Night last month. It took “Puncher” a little time to find his groove, but he was hitting on all cylinders come the third round, where he cancelled the Brazilian via TKO stoppage.

With the tools Bagautinov brings to the table, Elliott is well aware he’s stepping in against a dangerous opponent. That said, confidence isn’t an attribute he’s in short supply of, and Elliott sees tremendous opportunity in their scrap on Saturday night.

“I think this is a great fight for me,” Elliott said. “He did have a great showing in his debut, but I fought the best 125-pound fighter in the division in my opinion for my first fight and I don’t think Bagautinov is going to have near the tools John Dodson had, or even Lou Gaudinot for that matter. I’m excited for the matchup and it’s too bad for him he got me in his second fight with the UFC because it’s not going to end well for him. But I know he’s tough and has power so I’m excited for the fight. I think there is an opportunity to win bonus money and that is what excites me the most.”

While a victory over the Russian will undoubtedly put him in solid standing in the divisional hierarchy, and being closer to the title shot is definitely a plus, reaching that position isn’t the be all end all for Elliott at this point in his career.

He’s logged just north of four years on the professional stage and the current emphasis is as much about continued development as it is anything else. When it comes to sharpening his skills and pushing himself to the next level, Elliott relies on his cohorts at Grindhouse MMA. The gym houses several UFC fighters who, much like Elliott, are looking to make their names and climb divisional ladders in their own rights.

The squad has quickly developed a reputation for being scrappy inside the cage and Elliott believes exciting fights is somewhat of a calling card for the collective at Grindhouse.

“We are trying crazy stuff. We are trying to be exciting and go for the finish out there. We practice the way we fight where we are always going for the knockout or the submission. If you’re not doing that then you’re not playing the game right. Being exciting is part of who we are at Grindhouse, and since we practice that way, it makes it easier to go out and do it in a fight.”