Ellenberger Looking to Put His Stamp on a Win this Weekend

"Each fight, especially the higher you go and the better the guys are,
the more disciplined you gotta be, and every little thing matters." - Jake Ellenberger 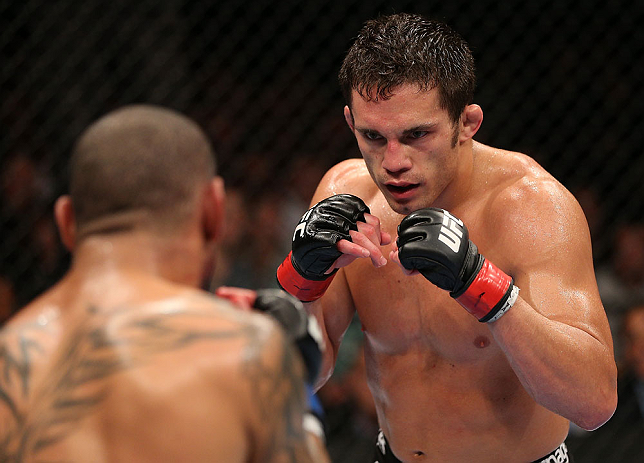 If you’re walking around with a nickname like “The Juggernaut,” there are certain things expected of you when you fight, and welterweight contender Jake Ellenberger has lived up to every one of them.

He throws hard, fights hard, and is always looking to go home early. That’s the good news. The bad news is that fighting that way all the time has cost him.

In his UFC debut in 2009, he came close to finishing Carlos Condit in the first round on at least two occasions, only to see “The Natural Born Killer” roar back and eke out a split decision win. Nearly two and a half years later, it was nearly déjà vu, as a late surge by Diego Sanchez almost allowed the Ultimate Fighter season one winner to steal a decision victory.

But the fight that hurt the most came in June of last year, when Ellenberger bloodied and almost stopped Martin Kampmann in the opening stanza before getting over aggressive and finished himself in round two. The loss was Ellenberger’s first by knockout, and it snapped a six fight winning streak that had him on the fast track to a world title shot. It was a hard lesson to learn, but with his disciplined three round win over Jay Hieron in his most recent bout last October, it was obvious that the Nebraska native learned it.

“You really have to learn how to fight disciplined in the later rounds,” he said. “You learn a lot about yourself each fight and I got a little reckless trying to finish the fight (against Kampmann) in the first round. It could have been stopped but it wasn’t and I got dropped and they stopped it, but that’s life right there; there’s nothing you can do about that. The fight with Jay, I know him really well, and I knew I had to be disciplined because he’s quick, he hits hard, and he’s pretty good everywhere too. So I have to be more aware of not being so vulnerable and just being tight defensively, as well as being disciplined in those later rounds, which is a really hard thing to do.”

It’s especially difficult for a fighter like Ellenberger, who can end a fight with a single punch. When you have that kind of power, it’s easy to assume that once you rattle somebody, the end is going to follow moments later. When it doesn’t, the gas tank may be empty and you’ve still got 10 minutes to fight. That’s a scary proposition at this level of the sport, and Ellenberger knows it.

He was against Hieron and it showed. He still swung hard, he was still trying to finish, but he wasn’t getting himself in bad situations because of an eagerness to land a bomb. That makes the 27-year-old an even more dangerous matchup for his fellow contenders at 170 pounds, something he plans on making Nate Marquardt aware of this Saturday at UFC 158 in Montreal. Originally scheduled to face Johny Hendricks on the Bell Centre card, Ellenberger was left in momentary limbo when Hendricks was moved to the co-main event slot against Carlos Condit to replace the injured Rory MacDonald. But signing on for the fight quickly was the returning Marquardt, a former middleweight contender who is making his third start at 170.

“He’s very experienced, and he’s fought some good friends of mine at middleweight and some of the best at middleweight,” said Ellenberger. “But now he’s at 170 and that’s the weight I’m best at. I don’t really think a lot about what he’s gonna do, just about what I’m gonna do and what I have to do to win this fight. He doesn’t really have any big weaknesses at all, but I’m ready anywhere he goes.”

And even though beating Hendricks, the division’s number one contender, would have shot him further and faster up the rankings, Ellenberger is just focused on what’s ahead of him and not what could have been.

“That fight would have brought me the most value in getting to the number one contender, which was Johny, and that was exactly why I wanted that fight, and I knew I had the skills to beat him, but that’s really irrelevant right now,” he said. “I’m keeping focused on my opponent, and less of who it is and more of my actions and offense and what I’m gonna do to win the fight. I’ve been focused on my training and these last ten weeks have gone smooth, so it’s just time to execute right now.”

Given the styles of the two veterans and the high stakes involved on the welterweight-rich card, Ellenberger vs. Marquardt could wind up challenging the main event of Georges St-Pierre vs. Nick Diaz and the co-main of Condit vs. Hendricks for Fight of the Night honors, something you wouldn’t have guessed based on the reaction to everyone on the recent UFC 158 media teleconference, which was dominated by GSP and Diaz. But Ellenberger wasn’t bothered by it.

“It was entertaining,” he chuckled, before admitting that he’s never gotten into some heated pre-fight banter like the main eventers did last week.

“Not like that, not on a conference call,” he said. “That’s never really been a big problem for me. When it comes down to it, it doesn’t matter what people say before. You really choose what you take personal, and I’ve never taken anything, especially from an opponent, personally. It’s all competition.”

And as a competitive athlete, Ellenberger has every intention of being the welterweight people are talking about when they leave the arena this Saturday night.

“There wouldn’t be a better time than right now,” he said. “That’s the card and it definitely has the eyes on it. It’s always priority number one to win, but I’m really looking to make a statement and put a stamp on it.”