Elkins' win at UFC 209 is the one that 'changed everything'

The morning after. It’s the time most fight fans don’t see, and after Darren Elkins’ epic comeback win over Mirsad Bektic in March, that was probably a good thing. But the man who walked through fire and blood to get a third-round knockout at UFC 209 in Las Vegas would disagree. Sure, he was sore from 13 minutes and 19 seconds of fighting, but it was all worth it.

“I had a lot of adrenalin going through my body and I felt like that was the fight that really changed everything,” Elkins said. “My phone was blowing up, everything was blowing up. It was definitely a busy morning.”

This Saturday, Elkins returns to the Octagon for the first time since the defining bout of his career, as he faces Dennis Bermudez in the UFC on FOX co-main event in Long Island. But even four months after the Bektic fight, people are still talking about it, and for good reason, as the Indiana native showed tough guys what tough means.

“I’ve been doing this for years, but that was one of those things where I dug deeper than I ever had to dig, and to come out with a knockout like that, it was pretty amazing,” he said. “I knew I was always capable of something like that, and it finally happened.”

It’s what every fighter says, that if pushed to the limit, he or she would respond and find a way to win. Yet while every fighter has heart, some have a little extra in their chest, and Elkins is one of those guys. He’s proved it for years, but he went above and beyond the call of duty against the highly-touted Bektic, who dominated the fight until Elkins had decided he had enough, roaring back in the third round to win.

“I felt like I’m always a guy who excels in the later rounds, and once it hits that second and third round, that’s when I’m really starting to go and starting to fight,” he said. “In that one, I knew I needed a finish, and with the training we’ve done and the footwork and the power and the combos, it’s really upped my game and when I needed to do something spectacular, it just happened.”

Moving to Sacramento with his family to train with Team Alpha Male has made a big difference in the game of the 33-year-old, who has won four straight leading into Saturday night’s bout. But the question is, can the boys in Sacramento get Elkins to start a little faster? 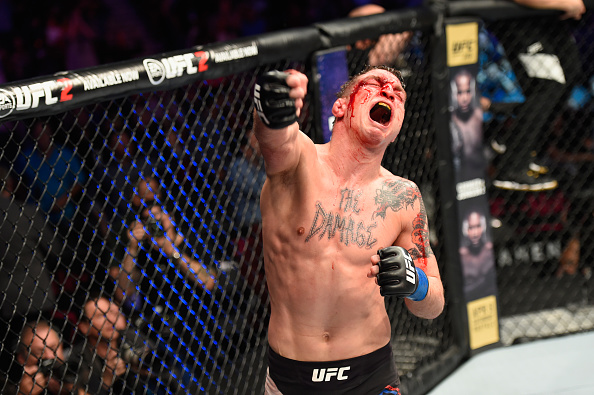 “That’s always the game plan,” he said. “I’m just not the most explosive guy in the first couple minutes. It takes me a minute for them to slow down and me to pick up my speed. But the key to this was getting my defense better. I can be a slow starter but not take as much punishment too.”

In short, Elkins doesn’t want to literally be known as “The Damage,” the nickname he received because he’s one of those fighters who starts bleeding on the walk to the Octagon. Maybe “The Damager” would be preferable, if not too catchy. But all of the peripheral stuff really doesn’t matter to a blue collar competitor who has taken the long way to the featherweight top 15. How long? Try over seven years in the UFC alone. But given his recent performances, he’s just getting started.

“I do feel that maybe if I talked more s**t in my career or done a few things differently that maybe I could have fast-tracked it, but at the same time, that’s not who I am,” Elkins said. “I’m not the smooth talker that can go in there and just try to humiliate people and stuff like that. That’s just not my style, and I’m happy with that. One thing I can say is I really know who I am and I’m not going to try and be someone I’m not. I’m just not that guy. I enjoy the competition, so just being able to compete every time, I’m happy. I fought a lot of different guys, and every time I get to step back in that cage, I’m happy.”