Editor's Note: Be sure to consult a medical doctor for clearance before starting this or any fitness program. 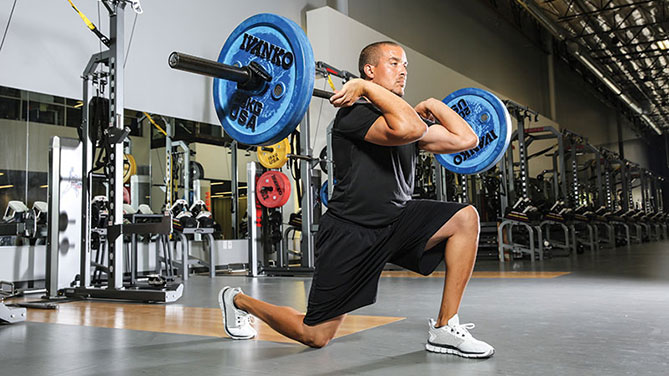 "The reality is that MMA is behind its peers in the training curve—exactly where baseball was 15 years ago, when they chased specificity to no end.”

That’s Brett Bartholomew, MS Ed, CSCS*D, a Phoenix-based strength and conditioning coach and Performance Specialist at EXOS, delivering a gut punch of an assessment to the state of mixed martial arts training today.

Indeed, while there are pockets of forward-thinking trainers peppered among the mixed martial arts coaching ranks, much of the landscape for aspiring UFC fighters is cluttered with complexity, programming a savage beatdown of endless drills and highly specific exercises ostensibly to groom a fighter for any possible eventuality in the octagon.

In Bartholomew’s view, however, such overwrought preparation in the strength and conditioning realm tends to miss the mark, leaving fighters overtrained and well off their maximum physical peak come fight day. “It’s not advantageous for us as performance coaches to butcher them during strength training. How would they have the necessary energy to spar and fight, which is what matters most? We’re the supporting cast. We build the engine and make it more efficient, we don’t take it for a joyride.”

EXOS—formerly known as Athletes’ Performance, the world-famous training hub of professional athletes, with facilities around the U.S.—has recently partnered with the UFC to offer its services to the organization’s best and brightest fighters. With workouts tailored to elite-level men and women in practically every discipline and a roster of clients that has included Seattle Seahawks’ all-world running back Marshawn Lynch, 2013 National League stolen-base leader Eric Young Jr. and Cleveland Cavaliers’ power forward Kevin Love, along with roughly half of all the NFL first-round draft picks of the past few years, EXOS delivers results.

Instead of a bewildering plan of attack, Bartholomew has created a bare-bones, three-days-per-week weight-training program for UFC: The Official Magazine as an example of what a typical MMA athlete seeking EXOS’s services might expect. It’s aimed at increasing overall strength and power, with added emphasis on the core, and it adheres to the EXOS tenet of “doing simple things savagely well.”

Perhaps most notable for our readers, the workouts are straightforward enough to do wonders for any average Joe or Jane seeking to be stronger and better conditioned—and who wouldn’t mind a lean six-pack to boot.

“The biggest part of our partnership with the UFC centers around training that’s performance and injury-prevention centered,” Bartholomew explains. “The sport and its fighters do not need complexity when it comes to their physical prep: They need more foundational strength building, power training and mobility and core exercises—what we call ‘pillar movements’—to round out their programs. Focus your time and energy on exercises that have been proven to increase strength and power through real science, not on exercises that just look cool.”

Each day consists of a leadoff exercise followed by two circuits. The movements are arranged with the pursuit of whole-body balance in mind. “A well-rounded fighter is a more dangerous fighter, especially in the violent chess match of a UFC bout,” Bartholomew says. “Every exercise must have a purpose, and you must balance out pushes and pulls. This means that you shouldn’t have a program that has four or six exercises that all stress your chest and shoulders and only two that work your back. Every part of our body needs attention.”

The program also includes prescribed rest patterns, which are meant to be followed—use a stopwatch or the timer on your smartphone if you need to. “Rest is a weapon,” Bartholomew says. “This is not a CrossFit routine. When training for strength and power, it’s imperative that you rest for the allotted time between sets.

“When fatigue sets in, power greatly diminishes,” he continues. “Know the difference between fighting and sparring versus physical development. We aren’t trying to replicate the demands of the octagon in the weight room—we’re strengthening the muscles involved with fighting, and building a more powerful and efficient engine.” In other words, be disciplined when it comes to rest and you will find your power and strength levels increasing over time.

The bottom line,” adds Bartholomew, “is that the simplicity of this program will likely shock you. But, if done the right way, it is an absolute monster.”

THE EXOS UFC STRENGTH AND CONDITIONING PROGRAM
Do these workouts once per week, with one day in between each session at minimum.
The listed sets are working sets: You should do one to three warm-up sets of three to five reps for each major lift.

*Two-second pause in top position.
Note: In between sets of the first exercise of the day, rest 60 to 90 seconds. Don’t rest between exercises within a circuit. Rest two to three minutes maximum between bouts of Circuit 1 and one minute between Circuit 2. 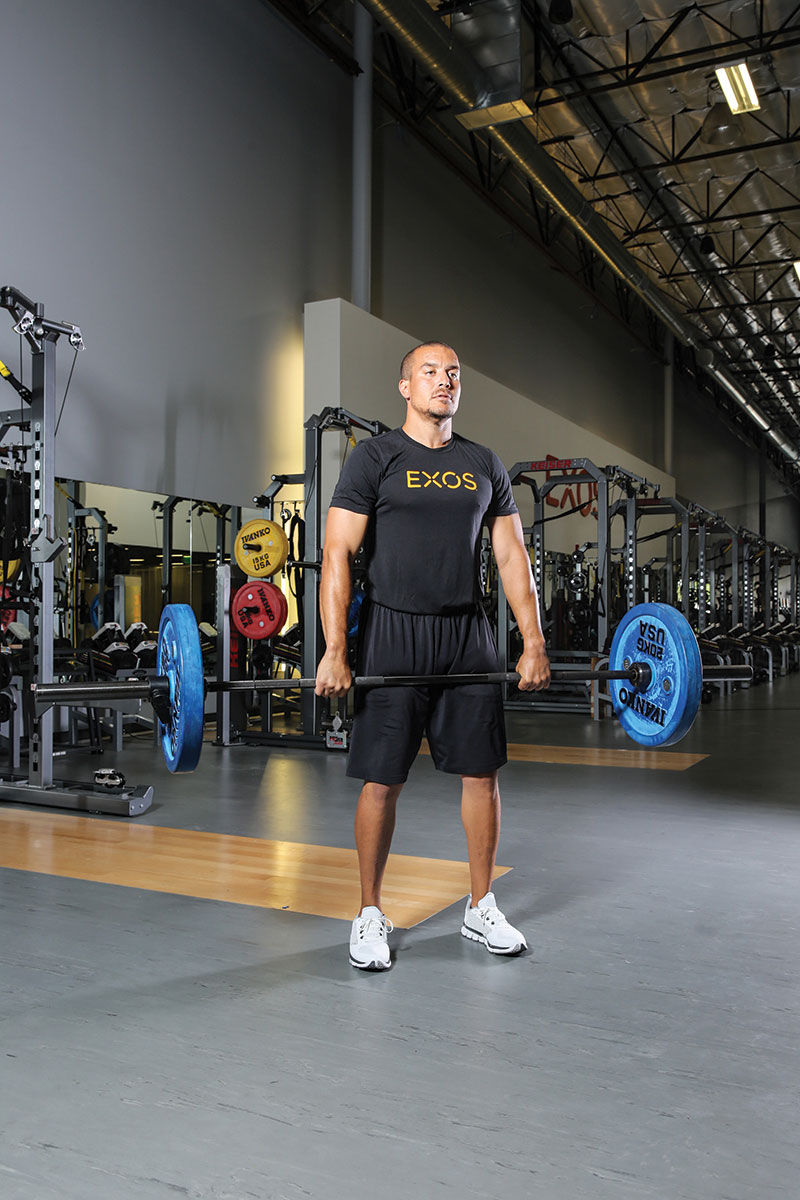 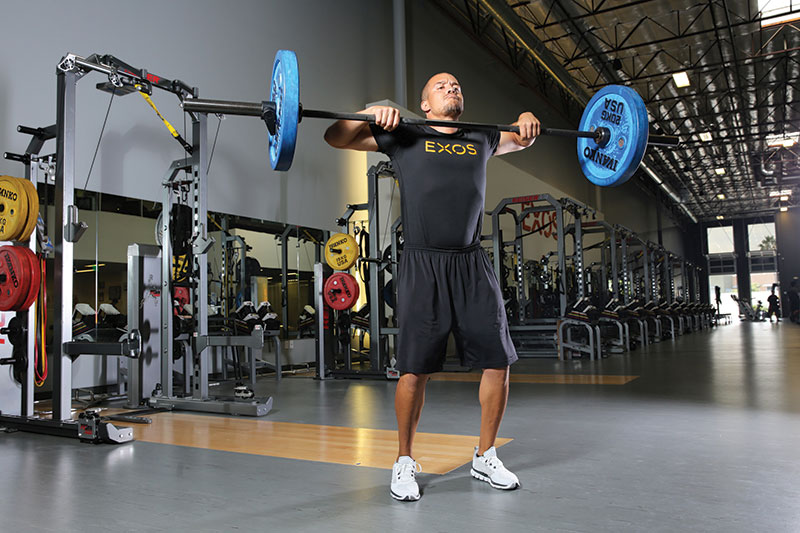 Start holding a barbell with an overhand grip at hip level, feet set just outside shoulder-width. Bend your knees to
dip downward, then powerfully extend your knees, hips and ankles to propel the bar straight up to shoulder level, keeping it as close to your torso as you can. Return the bar to the starting position under control to complete one rep. 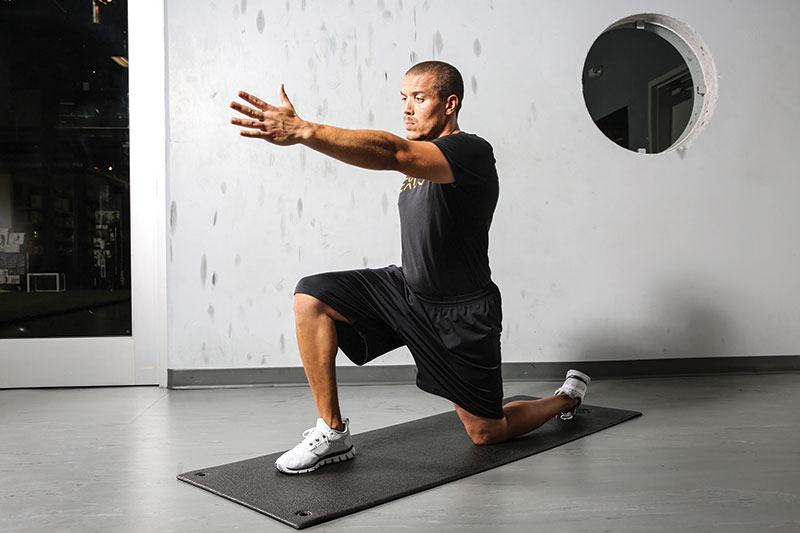 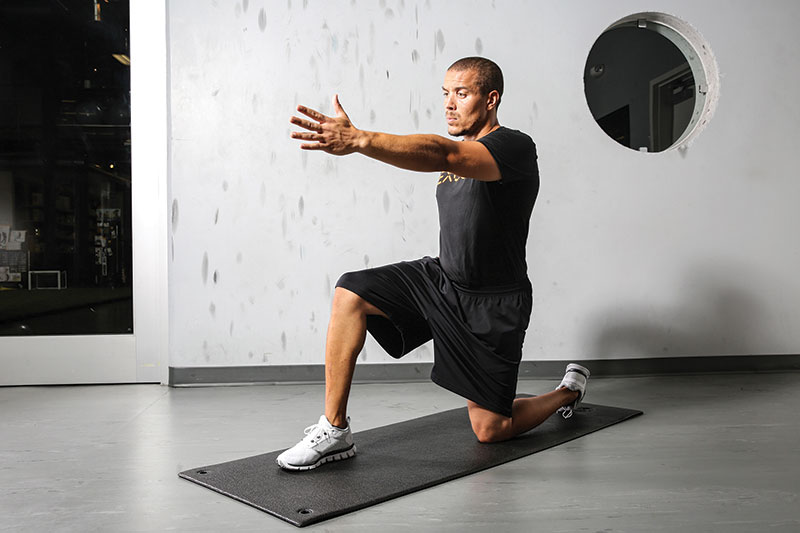 Assume a lunge position with the right leg forward and left leg back. Both your front knee and back knee should be bent at 90 degrees. To stretch, extend the rear leg as far back as you can while leaning slightly forward at the hips. Do eight 15- to 30-second holds, then switch legs. 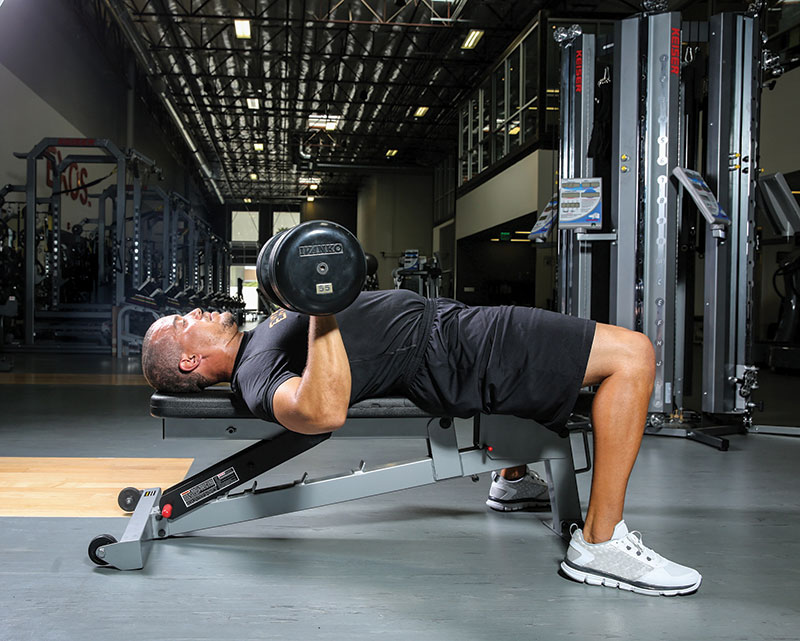 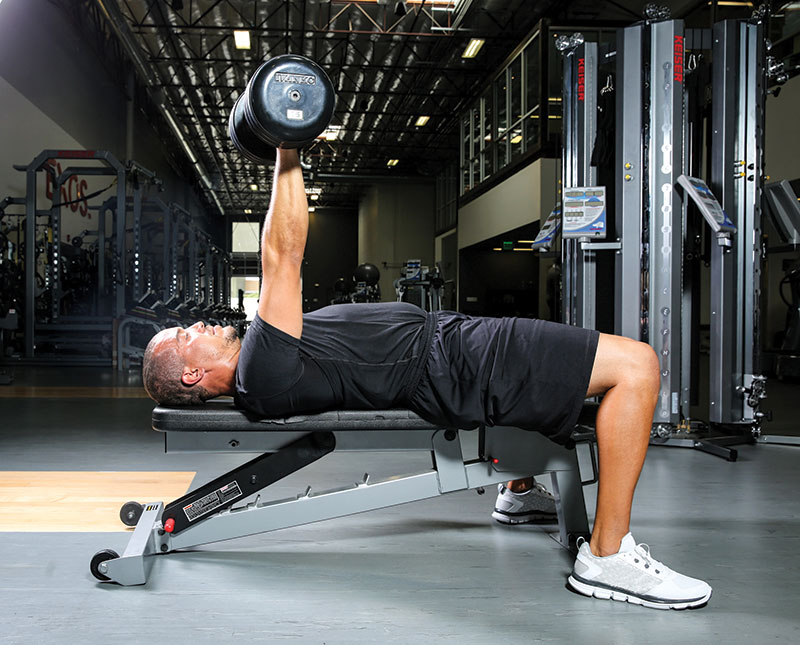 Lie faceup on a flat bench with your feet planted on the floor. Hold a dumbbell in one hand just outside your shoulder, with the other hand on your hip. Powerfully press the dumbbell up toward the ceiling without contorting your torso to do so. Return to the start under control and repeat for reps.

The EXOS program outlined in the following pages is guided by three principles:

• Ground-based: The big lifts are done with your feet planted firmly on the floor. These types of movements have been proven to have higher transfer to sport and fighting performance.

• Multi-joint: The exercises call upon large muscle groups, giving more bang for your buck. The athlete should train movements, not muscles (squat, hinge, push, pull and the like instead of back, chest, shoulders, arms and legs. Multi-joint movements, such as the clean, squat and deadlift, require a tremendous amount of strength through the core and engage every muscle in the body.

• Multi-planar: Fighters and athletes have to move at all angles: front and back, side to side and rotational. The inclusion of exercises like the lateral lunge and rotational medicine-ball throw help the fighter build strength and power 360 degrees around. 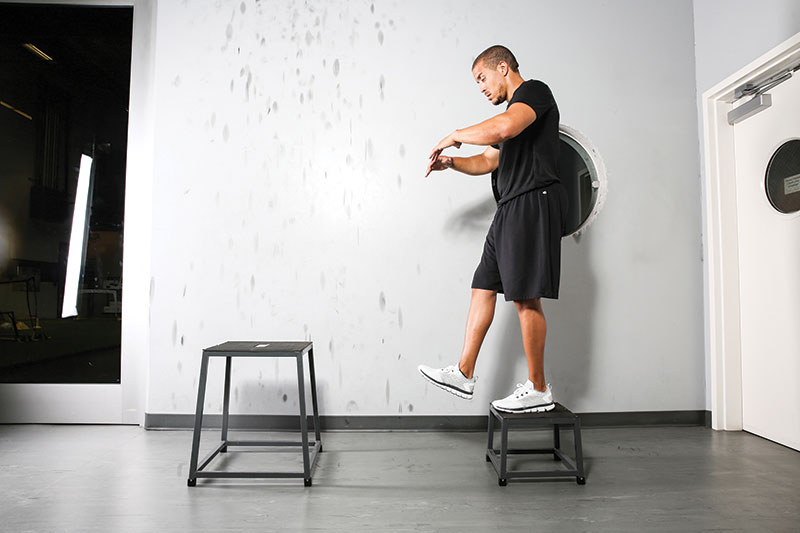 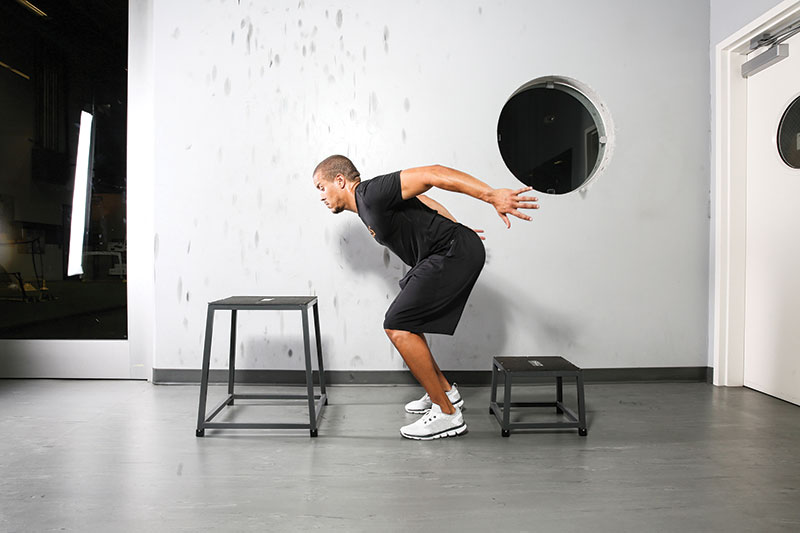 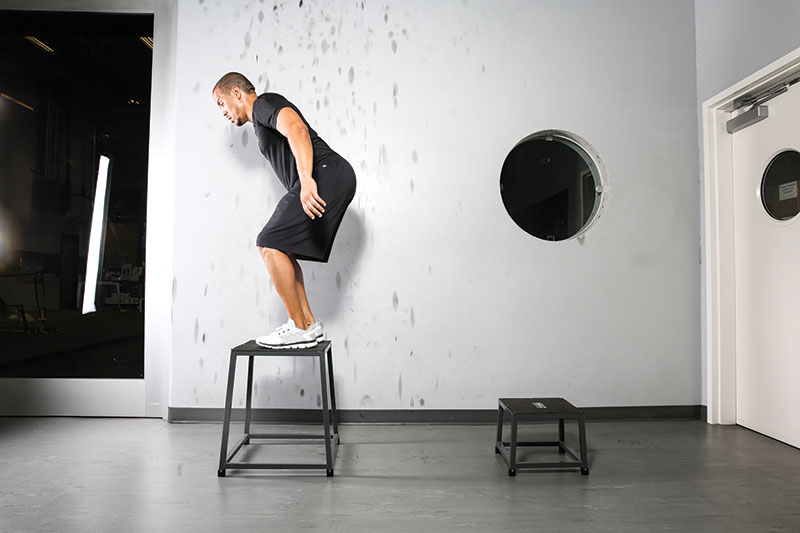 Step up onto a 12- to 16-inch box or platform, feet close together and knees bent in a ready position. Leap from the box down to the floor, absorbing the impact by bending at the hips and knees while swinging your arms forward for balance, then immediately explode back up over a hurdle or onto another box. Repeat five more times to complete a set.

This is similar to a standard incline dumbbell press, except you’ll press one dumbbell at a time: One dumbbell stays in an elbow-locked-out position while you perform five reps with the other arm, then you switch sides. “This keeps the muscles under tension for a longer time and helps build shoulder stability,” Bartholomew says. 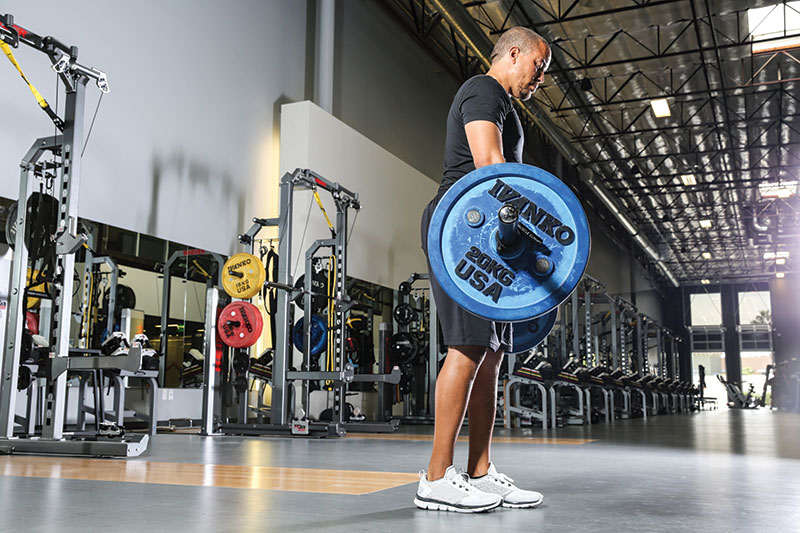 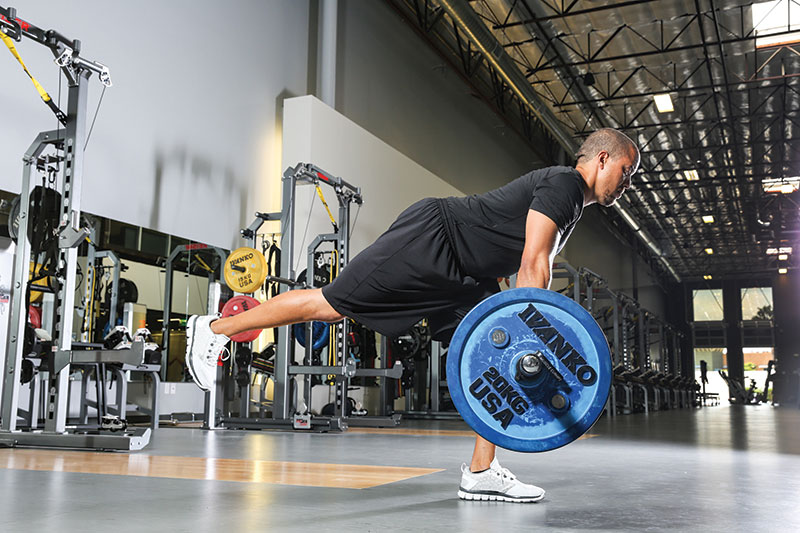 Stand upright holding a barbell in front of your upper thighs with an overhand grip. Keep your feet shoulder-width apart and maintain a slight bend in your knees. With your chest up and core tight, lean forward from your hips, allowing one leg to go up behind you (in line with your torso), moving the bar down along your body as close as possible until the plates touch the floor. Maintaining the arch in your lower back, reverse the motion to return to standing. Repeat for six to eight reps with one leg, then switch legs. 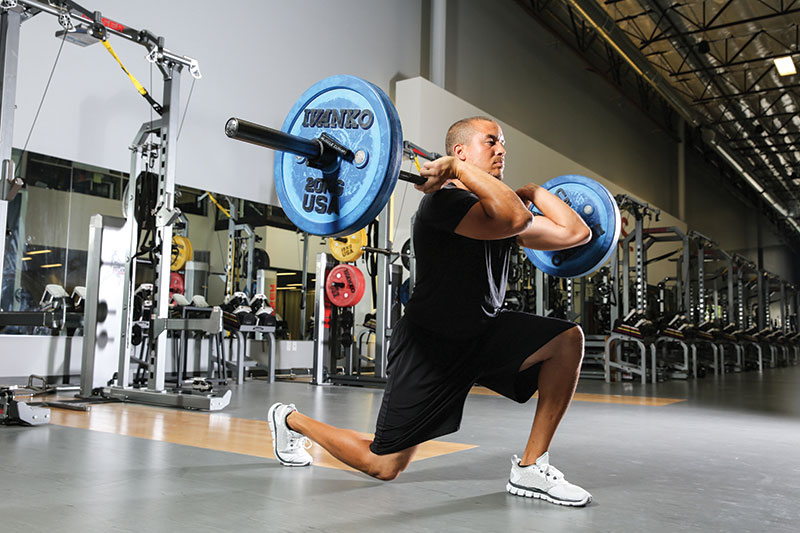 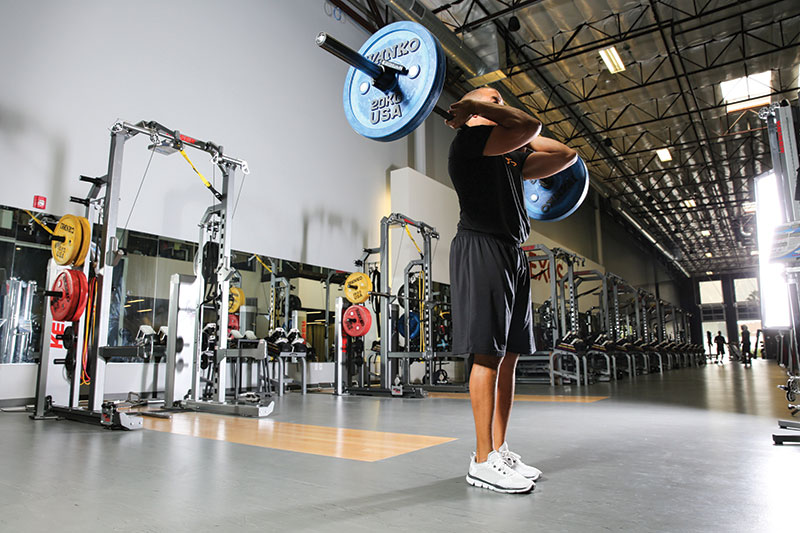 Retrieve the bar from a rack in the front squat position, the bar should rest across your deltoids, hands gripping the bar and your elbows pointing forward. Extend one leg back, gently dropping your rear knee to the floor. Push through the heel of your forward foot to return to starting position.

Grasp each end of light to moderate resistance tubing that’s looped in a circle at chest level and pull it apart as far as you can. 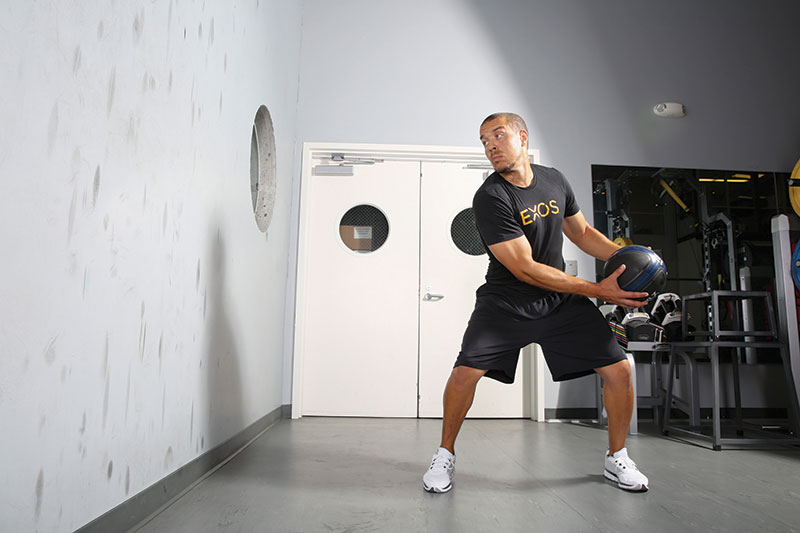 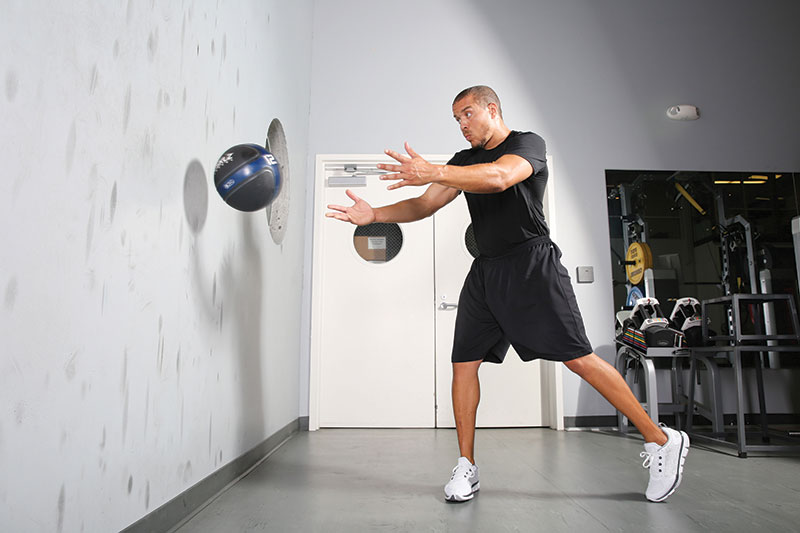 Stand sideways to a wall with your arms in front of your midsection holding an eight- to 12-pound medicine ball in both hands. Turn your body toward the left side while lowering yourself into a quarter-squat, “coiling” yourself for the throw. Next, explosively rotate toward the right as you extend your knees and hips, tossing the ball forcefully against a wall (or, alternatively, to a partner). Catch the medicine ball on the bounce and return to the forward-facing position. Do 10 reps for one side, then switch sides and do reps to complete one set. 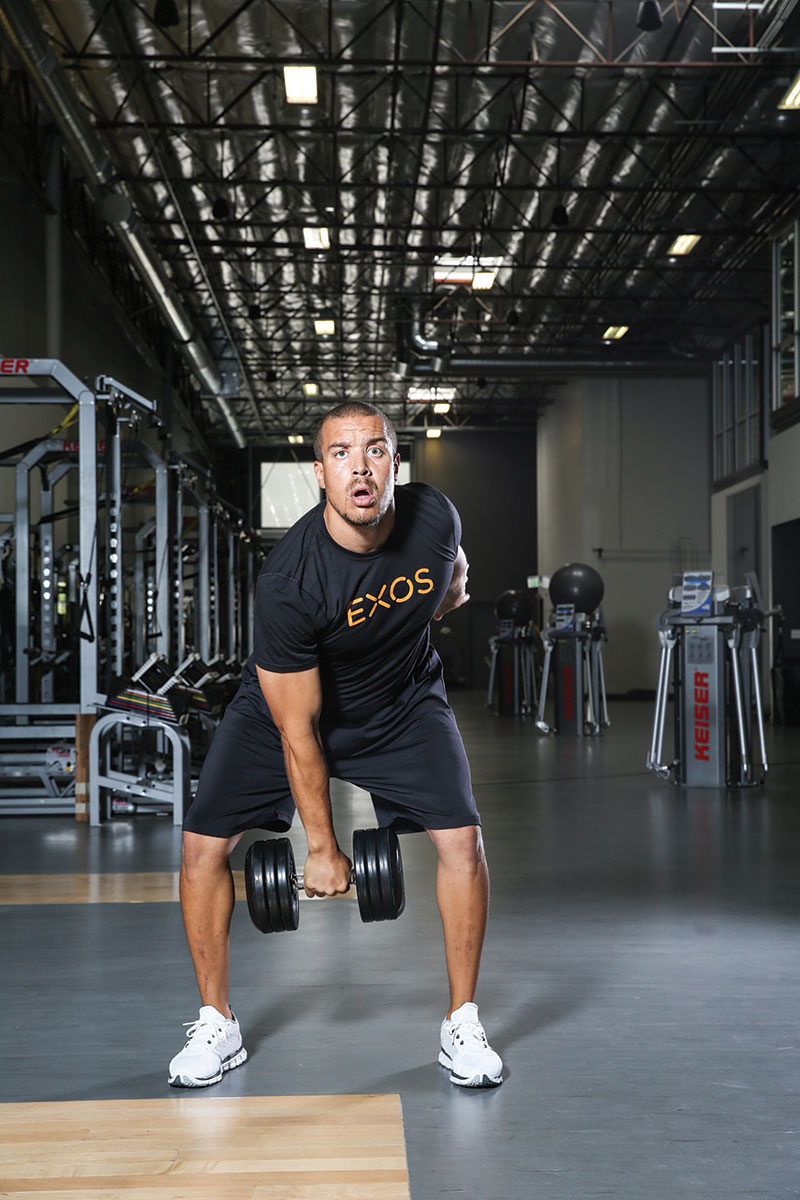 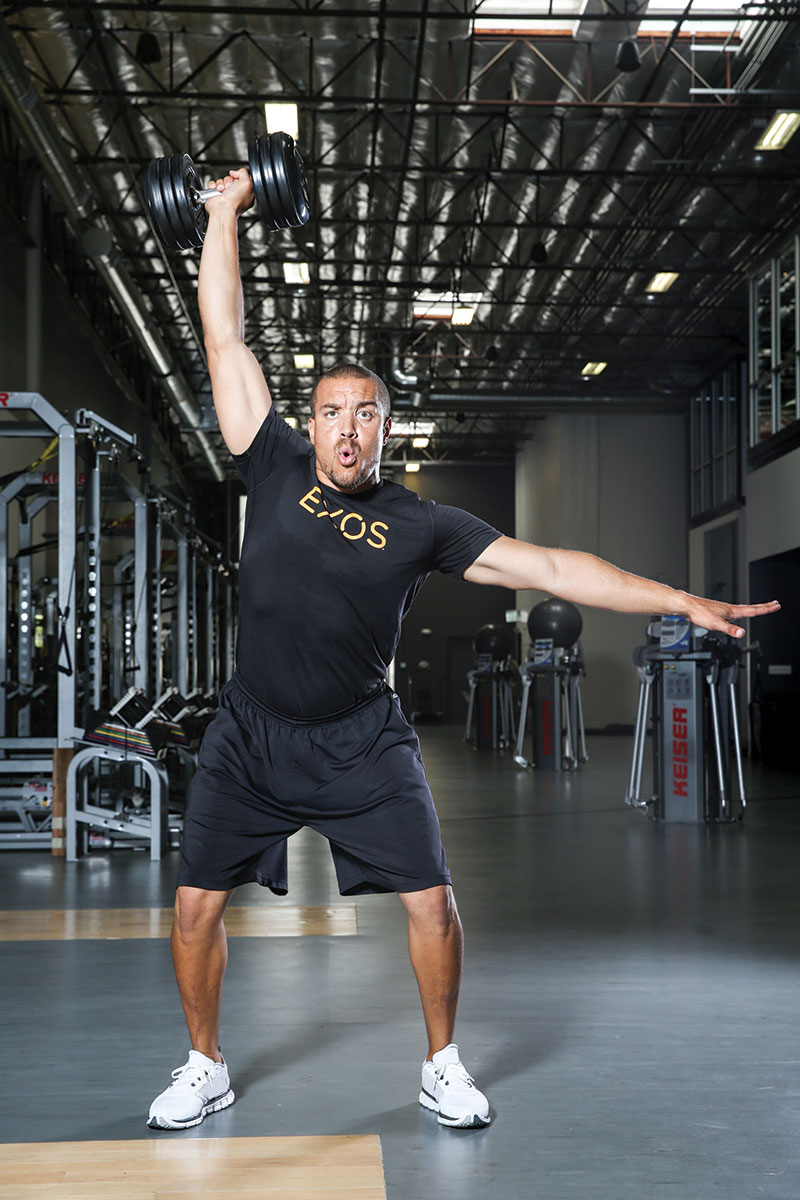 Grasp a dumbbell in one hand with an overhand grip and assume a shoulder-width stance, knees slightly bent and weight in the hang position. Explode the dumbbell upward by extending at the hips and “pushing” through the floor via your feet as you raise the dumbbell up along your body in one smooth motion, going up onto the balls of your feet at the apex. As the dumbbell reaches an overhead position with the arm extended, shift your elbow under the weight, palm facing forward. Do five reps with one arm, then switch arms. 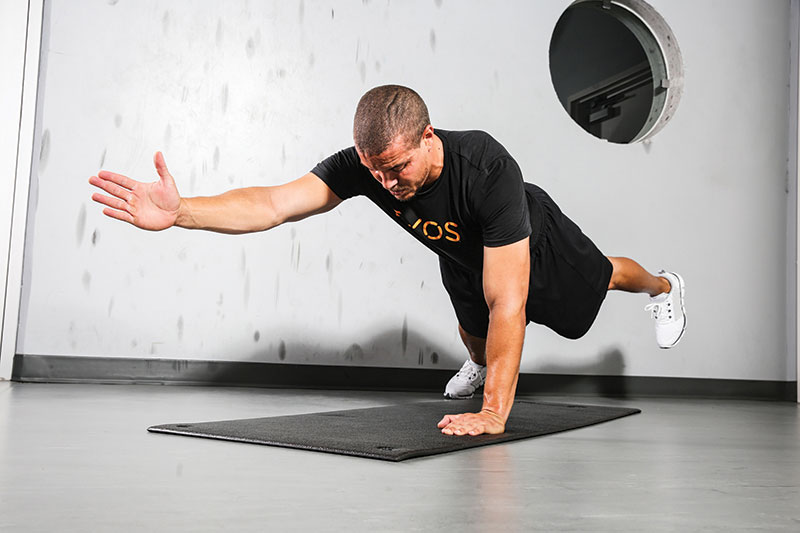 Assume a push-up position, with your body aligned from head to heels. Start by lifting your right arm and left leg from the floor, holding that position for two seconds, then switch so your left arm and right leg are elevated for two seconds. That’s one rep. Throughout, flex your core to keep your hips from collapsing toward the floor. 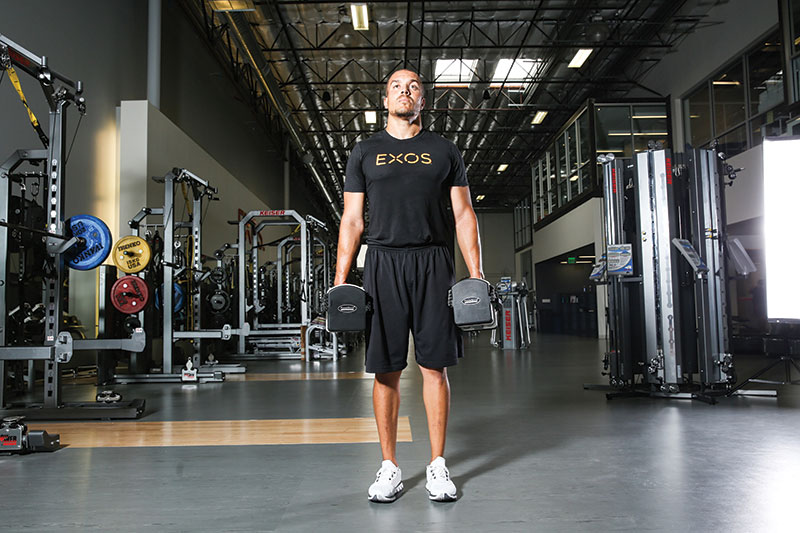 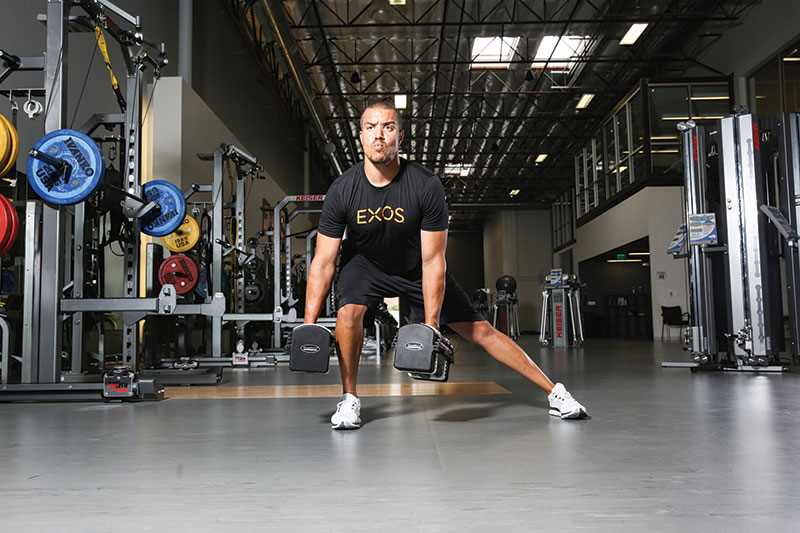 >Holding a dumbbell in each hand, take a long step out to one side, bending that knee to lower your torso and hips toward the floor. Your trailing knee will be extended, with that foot remaining in contact with the floor. At the bottom, return to a standing position by driving through your heel and straightening your knee, then step out laterally to the opposite side. 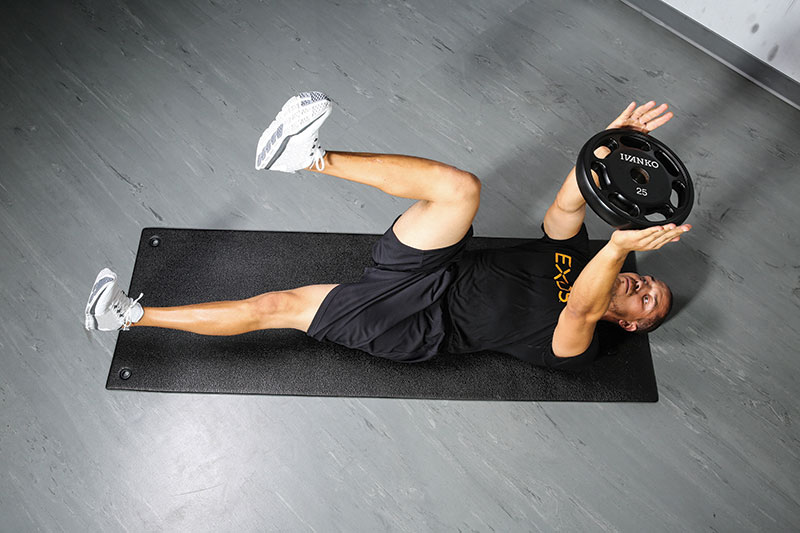 Lie on your back with your arms extended straight over your shoulders holding a 5- to 25-pound plate. Elevate your legs off the floor a few inches, and begin alternately bringing one knee at a time up and toward your upper body while keeping the other leg hovering just off the floor. Throughout, the weight plate should remain at arm’s length overhead. “The big postural key here is to keep the low back flat and rib cage pulled down throughout the movement,” Bartholomew says. “A partner should not be able to fit his hand under your lower back. If they can you are not correctly engaging your core.”