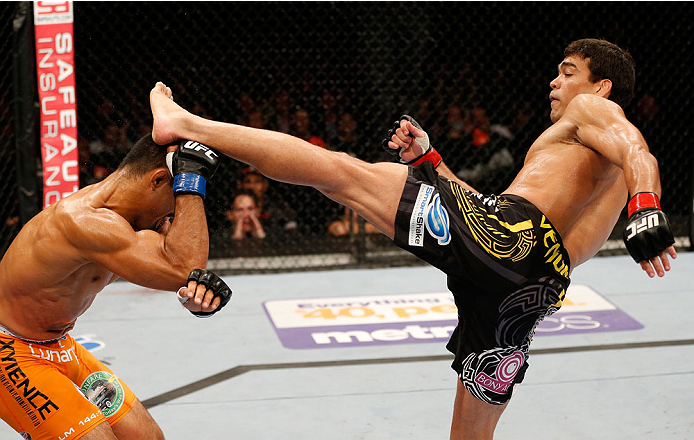 Former UFC light heavyweight champion and current middleweight contender Lyoto Machida returns to the Octagon this Saturday when he battles surging contender CB Dollaway in Barueri, Brazil. But before “The Dragon” returns home to fight in Brazil, let’s take a look back at some of his most memorable victories.

Rich Franklin - December 31, 2003 - Inoki Bom-Ba-Ye 2003
Result – Machida TKO2
Future UFC middleweight champ Rich Franklin, fresh off two UFC wins, took a gamble by going to Japan to face the relatively unknown Machida, just 2-0 as a pro – he lost that gamble, getting stopped in the second round. And from the opening bell, you got the impression that Franklin was in for a long night, especially when he fired off his first leg kick and got a straight left flush in the face for his trouble. Later in the opening round, he was knocked down by Machida, with perhaps only the ropes keeping him from being stopped, and he was just one step slower than the Brazilian, who finished in the second what he started in the first with a left punch followed by a right knee that spelled the end for Franklin. At the time, it was a stunning result to many, but talking about that fight earlier this year, Franklin isn’t surprised by the success Machida has gone on to enjoy. “I’m not really surprised by Machida,” said Franklin. “I fought Machida back at the end of ’03, and to be honest, at the time, he was the sleeper. We didn’t know who he was. He was a lot better than I thought then, and to see what’s going on with him doesn’t really surprise me.”

BJ Penn – March 26, 2005 – K-1 Hero’s 1
Result – Machida W3
Always fearless, BJ Penn had shocked the world once by jumping from the lightweight to welterweight division to dethrone Matt Hughes in 2004. In 2005, following his departure from the UFC and wins over Duane Ludwig and Rodrigo Gracie, “The Prodigy” decided to test himself against the even bigger and stronger Machida. For Penn, it was just another way of testing the philosophies of his first love, jiu-jitsu. “Jiu-jitsu was created where the small man can beat the big man, and I’ve been doing jiu-jitsu since I was 17 years old, and that has always stuck in my head throughout all the time and all the way until now,” said Penn. “It’s ingrained in me that I believe I have a chance. I know that something’s gonna happen, the guy’s gonna make a mistake and I’m gonna get that armlock or get that choke.” It didn’t happen though, as Machida, then 5-0, added another high-profile notch to his belt by pounding out a three round decision win. Now the world really wanted to see what this mysterious Brazilian was all about.

David Heath – April 21, 2007 – UFC 70
Result – Machida W3
Following Machida’s wins over big names like Franklin, Penn, Stephan Bonnar, and Michael McDonald, he entered the WFA organization and defeated Vernon White in July of 2006. Soon after, the UFC purchased select assets of the organization, including the contract of one Lyoto Machida. At UFC 67, Machida was introduced to UFC fans with a three round win over Sam Hoger that let observers know that this was no ordinary light heavyweight. Next up was David Heath, and while it was not a particularly memorable fight, Machida’s three round decision win sticks out in my mind nonetheless because it pointed out the difficulties opponents had to face when taking on ‘The Dragon.’ As Heath told me before the fight, “Machida has a really complex style and that’s gonna take a lot of work to get past some of the stuff that he does and make it the type of fight that I want it to be.” Heath wasn’t able to solve the riddle of Machida though, and even though fans booed that night, Machida stuck to his gameplan, frustrating Heath into mistakes that could have cost him the bout. “I’ve caught a lot of flack from some of the fans who say that there are two fighters in there, and if it’s a boring fight it’s the fault of both of them,” said Heath. “But I don’t think that’s a guy saying that who has gone, ‘well, if I want to do better here I’ve got to get completely out of my style and gameplan and just go rushing facefirst into a guy who wants me to do that.’ I think some people really respect that style and fault me for making it boring, but like I said, I don’t think that’s someone who’s faced the working end of a really dangerous fighter’s tools.”

Tito Ortiz – May 24, 2008 – UFC 84
Result – Machida W3
Though you couldn’t tell from looking at his usual poker face, Machida felt the heat leading up to his UFC 84 showdown with Tito Ortiz, who was in the last fight of his contract and in the midst of a heated feud with UFC President Dana White. Machida was ‘The Huntington Beach Bad Boy’s going away present, and the whole world knew it. “There was a lot more pressure,” said Machida. “That was the hardest part. There was a fight going on between Dana and Tito, and I didn’t want to get involved, but at the same time, I was in the middle of it. Either way I was able to stay relaxed.” And for 14 minutes and 25 seconds, Machida dominated every aspect of the fight, but then Ortiz pulled a triangle choke out of his bag of tricks and the entire fight world held its breath. “I did get concerned because the triangle was locked on,” said Machida. “I didn’t expect him to do that. I had trained a lot of ground work so I was prepared, but it surprised me.” After a few dicey moments, Machida pulled loose and went on to score a lopsided three round decision. It was the win that propelled “The Dragon” into the world title picture and made mainstream fans start to take notice.

Thiago Silva – January 31, 2009 – UFC 94
Result – Machida KO1
Despite five straight UFC wins without a loss, Machida still took heat from fans for only finishing off Rameau Sokoudjou and not being Wanderlei Silva in the Octagon. Machida stuck to his guns though, having the uncanny ability to make opponents fight his fight. And if they engaged or got overaggressive, he would make them pay. Fellow unbeaten countryman Thiago Silva did both, and Machida sent him packing with a crushing first round knockout. It was Machida’s biggest UFC win to date, and one that got him a shot at the light heavyweight title owned by Rashad Evans. More importantly, the fans started coming around for Machida. “I have been working hard to satisfy my fans and I feel that my hard work paid off in that fight,” said Machida.

Rashad Evans – May 23, 2009 – UFC 98
Result – Machida KO2
“Karate’s back,” said Machida seconds after winning the UFC light heavyweight title from Rashad Evans, and no one was arguing with him after another technically flawless performance that was capped off by a final sequence that was certainly – to use the Joe Rogan phrase – a ballet of violence. In 19 previous pro bouts, no one had ever seen Evans hurt and taken out like this, but Machida, MMA’s most complex puzzle, did it with his usual cool and precision. It was a master class from the new champion.

Mauricio Rua – October 24, 2009 – UFC 104
Result – Machida W5
Before Machida’s first title defense against countryman Mauricio “Shogun” Rua, most believed that Rua’s ultra-aggressive Muay Thai attack would be tailor-made for Machida’s precision counterstriking. But that wasn’t the case in the UFC 104 main event, as Rua tempered his usual strategy just enough to give Machida fits throughout the five rounder, and for the first time, ‘The Dragon’ was pushed to the limits. Yet just like a champion should, Machida responded to the challenge and got in more than his share of licks over the course of 25 closely-contested minutes. When it was over, Machida retained his title, though there were more than a few observers who believed that Rua should have gotten the nod. On May 8th of 2010, Rua took the judges out of the equation by stopping Machida in the first round to take the belt. But following that defeat and a close decision loss to Quinton Jackson at UFC 123, Machida turned things around in his first bout of 2011, knocking out Randy Couture at UFC 129 in April of 2011.

Mark Munoz – October 26, 2013 – UFC Fight Night
Result – Machida KO1
Following the win over Couture, Machida gave Jon Jones a tough go for a while in their UFC 140 title fight before getting submitted in the second round, yet after a nice knockout of Ryan Bader in August of 2012, two lackluster performances resulted in a split of two fights with Dan Henderson (win) and Phil Davis (loss), prompting Machida to test the waters at 185 pounds in late 2013. “The Dragon” received an A+ in that test, knocking out Mark Munoz in a single round. Now one of the hottest fighters in the 185-pound weight class, Machida hopes that a win over Dollaway this weekend will propel him back into a title shot.