UFC flyweight champion Demetrious “Mighty Mouse” Johnson isn’t just one of the most dominant champions competing in the Octagon at the moment; he may be one of the most dominant ever, a title he may cement in the record books if he defeats Ray Borg this Saturday in the main event of UFC 215. That’s high praise for the Washington state standout, but he’s not resting on his laurels as he approaches a matchup that could end up as a historic one. As we await Saturday night’s card in Edmonton, here are Mighty Mouse’s Elite Eight.

2011
Miguel Angel Torres (WATCH ON UFC FIGHT PASS)
Even though Johnson lost his first WEC bout in 2010 to Brad Pickett at bantamweight, it was clear that the Pacific Northwest prospect was something special, and his coach Matt Hume told me as much during his early WEC days. Of course you would expect that from a coach, but Hume has never been one to toss praise around lightly, so when he says to keep an eye on a fighter, you do. And he was right with Johnson, who won his next two WEC bouts over Nick Pace and Damacio Page and then debuted in the UFC in 2011 with a win over Kid Yamamoto. But it was his May 2011 win over Miguel Angel Torres that forced the world to sit up and take notice. Consider that just a couple years before the UFC 130 bout, former WEC champion Torres was on the pound-for-pound list as one of the best in the world. But Johnson beat him via unanimous decision, snapping Torres’ two-fight winning streak. And “Mighty Mouse” did it with a broken leg he suffered in the second round. Impressive stuff.
Pre-order UFC 215 now | Get tickets to UFC 215 in Edmonton

2012
Joseph Benavidez I (WATCH ON UFC FIGHT PASS)
The win over Torres put Johnson in a world title fight against Dominick Cruz in October of 2011, but the challenger fell short of victory, losing a five-round unanimous decision to “The Dominator.” It could have been a crushing blow for Johnson if not for the fact that the UFC had decided to institute a 125-pound flyweight division, with Mighty Mouse one of the four fighters chosen to compete in a tournament for the belt. Johnson had a draw with Ian McCall in his first 125-pound contest, but after decisioning “Uncle Creepy” in a rematch three months later, it was off to Toronto for a showdown with Joseph Benavidez for the vacant title in September of 2012. The bout was the best advertisement the weight class could have had, with the speedy action all contested at the highest technical level. When the UFC 152 bout was over, Johnson took the split decision and the title. He had made history as the first flyweight champion in UFC history.

2013
John Dodson I (WATCH ON UFC FIGHT PASS)
Four months after winning the title, Johnson defended it for the first time against John Dodson. Perhaps the only fighter able to match Johnson in speed, Dodson has a decided edge in power that he showed in the early going of their January 2013 bout, rocking and dropping the champion. But after a rough couple of rounds, Johnson showed a champion’s heart, making the necessary adjustments and roaring back, eventually taking a close, but unanimous, decision over Dodson in a fight the two would revisit in September of 2015.

2013
Joseph Benavidez II (WATCH ON UFC FIGHT PASS)
After the scare against Dodson, Johnson dominated John Moraga in his next title defense before finishing him via submission in the fifth and final round. His next bout, a rematch against Benavidez in December of 2013, was one of the most anticipated of the year, but Johnson took the drama out of the bout almost immediately, knocking Benavidez out in just over two minutes. The result stunned the MMA world, and not because Johnson won, but how the champion emerged victorious. Engaging in gritty five-rounders, scoring submissions or delivering knockouts, this 125-pound dynamo could do it all.

2015
Kyoji Horiguchi (WATCH ON UFC FIGHT PASS)
The second Benavidez fight wasn’t DJ’s last dominant performance, as he continued to pile them up, shutting out Ali Bagautinov and submitting Chris Cariaso in his two 2014 outings. As 2015 dawned, Dodson was on the shelf, and few had done enough to warrant a place in the title conversation. But the champ had to fight, so rising Japanese star Kyoji Horiguchi was tasked with the challenge of dethroning Johnson at UFC 186 in April. Horiguchi, who was a on a nine-fight winning streak entering the bout, was game throughout, but he proved to be too inexperienced for the veteran titleholder, who controlled the bout from the start until he forced Horiguchi to tap out to an armbar with one second left in the fifth and final round.

2015
John Dodson II (WATCH ON UFC FIGHT PASS)
Despite all of Johnson’s clear-cut victories over the flyweight division’s best, there was always going to be the question of the Dodson fight and whether “The Magician” had the formula to dethrone the champion. Well, if he did, Johnson was a step ahead and figured it out for himself when the time for the rematch arrived. This was not the same fight the second time around, as Johnson dominated from start to finish, winning a 50-45, 49-46, 49-46 decision over his rival. 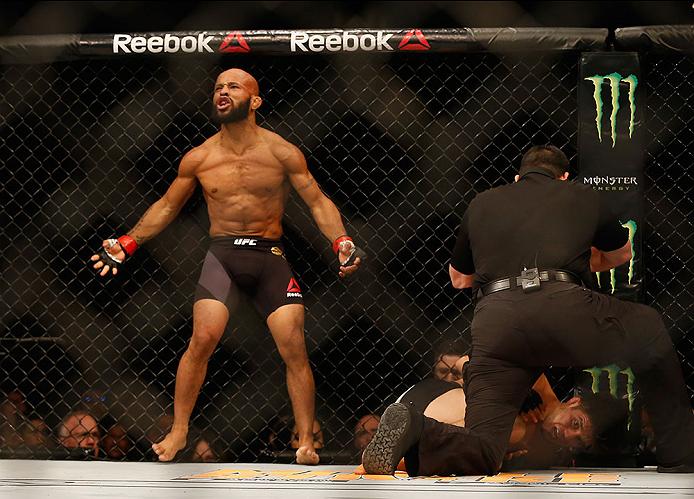 2016
Henry Cejudo (WATCH ON UFC PASS)
Facing an Olympic gold medalist in wrestling, Johnson was expected to show off his mat game against Henry Cejudo at UFC 197, but instead, he delivered his first knockout since the second Benavidez fight, as he bounced up quickly from a takedown, fired off knees that jarred Cejudo, and then finished the bout off at 2:49 of the first round.

2017
Wilson Reis (WATCH ON UFC PASS)
Johnson made history in April of this year when he submitted Wilson Reis in the third round and tied Anderson Silva’s UFC record for most successful title defenses. And in that 10th title defense, Johnson didn’t just beat Reis; he submitted a Brazilian Jiu-Jitsu black belt with an armbar, adding to the legend of Mighty Mouse and setting up Saturday’s bout, where he can have the all-time title defense record all to himself if he beats Borg.