Elise Reed Ready To Tear It Up

Strawweight Army Reservist Seeks To Build On Her Momentum Starting Saturday vs Sam Hughes
By Thomas Gerbasi, on Twitter: @TGerbasi • May. 19, 2022

It’s the typical response a martial artist receives after breaking a board or brick in a demonstration, and third-degree taekwondo black belt Elise Reed heard it before an amateur MMA fight a few years back.

“There was a girl that thought she was really hot stuff and called me out,” Reed recalls. “She goes, ‘Bricks don't hit back; I hit back.’”

They fought. Reed won. TKO. Not surprisingly, the New Jersey product had a response to her opponent’s earlier statement.

“I finished it and I was like, ‘I made you my brick because you didn't hit back.’”

I could end the story right there and you would have a good idea of who Reed is, but there’s more to it than just silencing doubters for the strawweight prospect, who faces Sam Hughes this Saturday in Las Vegas.

But first, we need to hear more about breaking stuff, something Reed loves but can’t do much these days because she needs to keep her weapons sharp and healthy for her day job as a mixed martial artist.

“That was something I did before everything hit off, and breaking is the one thing that, as a martial artist outside of cagefighting, that you can equate to whether it works or not,” she said. “So breaking's a lot of fun, and very similar in terms of the adrenaline rush that you get.” 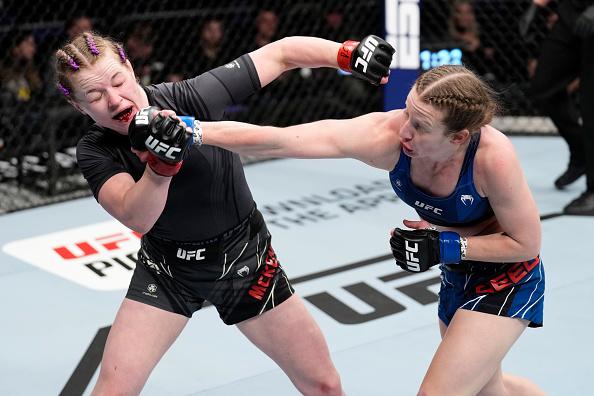 The adrenaline rush is understandable, especially when it works, but when it doesn’t, well, that’s what separates folks like Reed from the rest of us.

“It's bittersweet because you try it and if it breaks, it's great, if it doesn't break, it definitely hurts a lot more than it should, so it's a little bit of chance,” said Reed, who has broken baseball bats, cross-grain planks (which she said is the most difficult), cinder blocks and four concrete pavers stacked together. When she says this (and there’s proof on her Instagram page), I can only wonder how all this applies to MMA, especially if she gets mount on her opponent.

“You have to create the same force all the way through those cinder blocks, and if your angle is not a hundred percent, it won't break and it will just mess you up,” she explains. “So definitely the focus and the technique helps my current day job, and if I get somebody on the ground and I can throw elbows like that, it's game over.”

Scary. But Reed doesn’t blink. And why would she? She’s been studying martial arts since she was six, had an extensive amateur MMA career, and is now 5-1 as a pro. Let’s not forget that the Virginia Military Institute graduate is still in the Army reserves. Yep, not a blinker. And as calm as she is under pressure, she is equally loyal, as she’s been working with her coach John Kanabay since she was a child.

“I started because I wanted to be a Power Ranger, (Laughs) and my dad was like, 'Well, this place is open,' and the rest is history,” Reed said. “He (Kanabay) is my first boss; outside of the military, I haven't had any other job other than working for him, so we have a very good relationship. I think it's more of a partnership a little bit now in terms of the business side, but as a coach, he has called me on my s**t plenty of times. I like to be the tough person and he's like, 'Are you really doing that?' So, our coaching / fighting relationship has definitely grown over the past years, and it's worked out really well because he does know me so well and he knows my tendencies and my striking style, and he's seen it all develop. I've known him longer than he's known his wife, and he's pretty much known me the longest outside of my family. It's pretty crazy.” 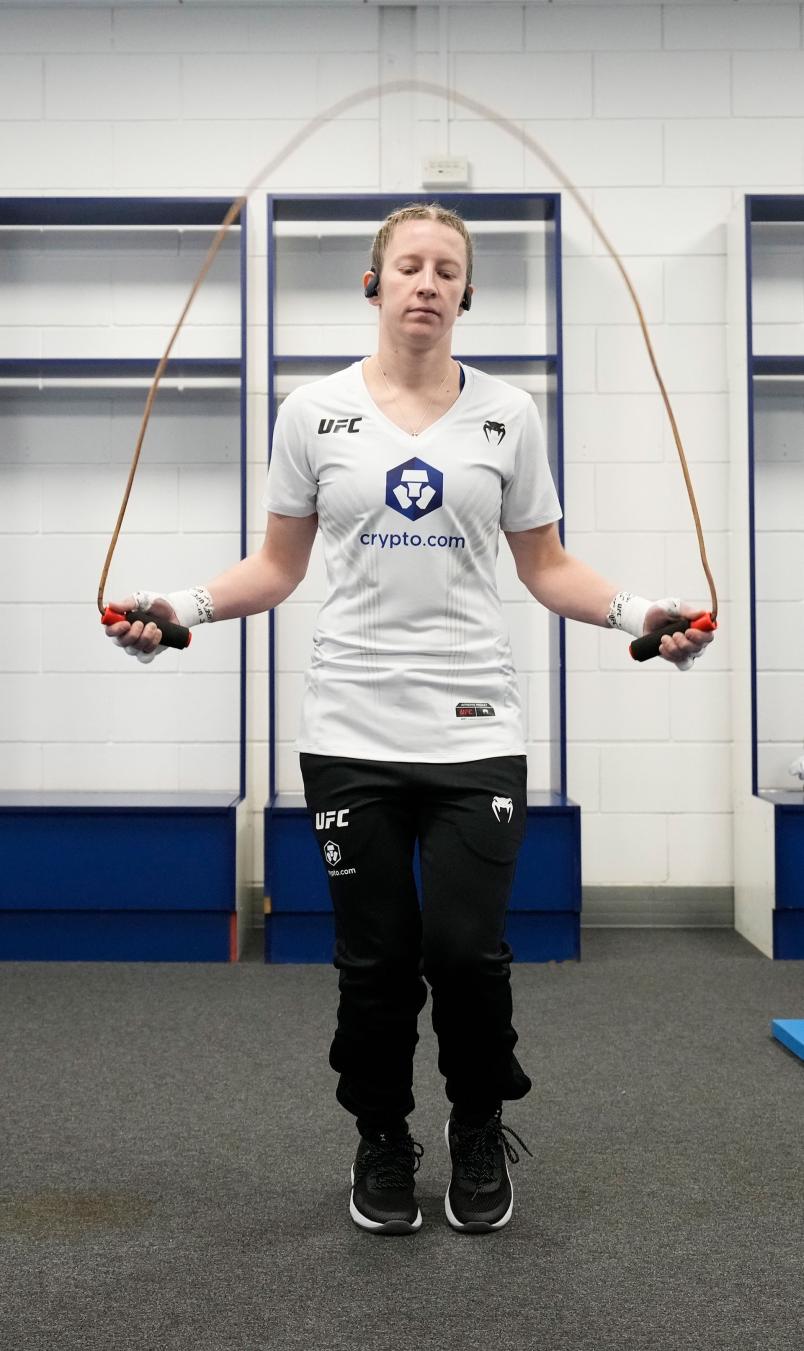 In a day and age where some fighters change camps like they change their socks, crazy is the appropriate word for it. And you also wonder how Kanabay and Reed have adjusted in going from traditional martial arts to MMA, but as the 29-year-old explains, it hasn’t been an issue at all to make the stylistic move.

“I'd say it was definitely natural,” said Reed, an owner and instructor at Kickside Martial Arts.  “So as much as I have a taekwondo base, it means that I can throw kicks, but I'm five-foot-nothing, and with taekwondo you really want to be a taller person to do it well, so I've always done striking, and Mr. K is from Tiger Schulmann's when they first started, so he was working on this half-MMA, where they had maybe three downed positions - open guard, mount, and some other one - and you could be there for 10 seconds. So what started it all was we did a full contact kickboxing class when I was about 15-16, and I competed there, realized I liked it and he (Kanabay) actually wanted to compete in MMA before I did. He was training at Alex Wilkie's to do his first amateur fight and his knee got blown out. So MMA was always there. It was a way for us to be competitive without doing karate-based tournaments, so it was a natural build for sure.”

And even as the stakes get higher and the level of competition rises, Reed is more than content with where she’s at with her coach. Again, it’s a rare loyalty to see in 2022.

“The funny thing is that I really appreciate him as much as we've grown together,” she said. “He's always worked to know what he doesn't know, and he's always said, listen, I'm a striker, I really like standup, I could look at that and figure out how to play that left and right, but obviously with MMA, there's ground, there's wrestling, and he was never a coach that was not open to learning something that he wasn't necessarily the best at, and I think that's the reason why our relationship is the way it is. He and I both look at it as opportunities to learn and grow and we've been able to develop together, and I think that's the biggest thing. I've been to plenty other gyms, and as a martial artist running a school, I think it's real easy to have somebody say, 'I know the secret move and that's gonna get you all the fights,' but in martial arts, there's no right answer, and I think that's what's made us both really strong. I've told him since day one that as much he was saying, someday you're gonna get bigger and you're gonna need management and make the team a little bigger, he can't leave, even if he wanted to. (Laughs) He's in it.” 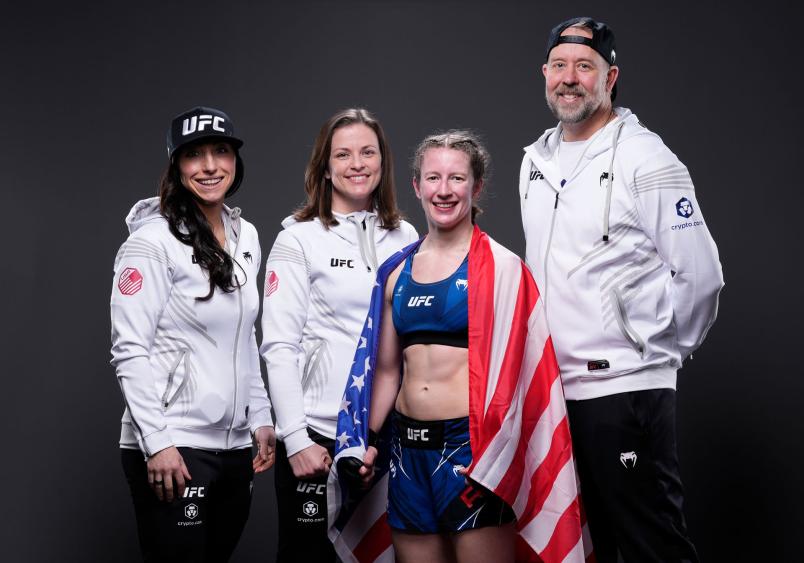 Elise Reed poses for a portrait with her team backstage during the UFC Fight Night event at O2 Arena on March 19, 2022 in London, England. (Photo by Mike Roach/Zuffa LLC)

And after four pro wins, the strawweight got a short notice call last July to move up to flyweight to face perennial contender Sijara Eubanks in her UFC debut. Reed was stopped in the first round, but when she returned to 115 pounds in March, fight fans got to see just what Reed can do with a full camp and at her natural weight, as she scored a three-round split decision over highly touted prospect Cory McKenna in London. And Reed wasn’t surprised.

“Cory was a tough opponent, we did a lot of preparation for her, and I can tell you right now, I have never felt more comfortable in the cage than that fight,” she said. “In the history of me being a fighter, I've always been a bit nervous, always had to pump myself up a little bit, and I stepped into that Octagon and I really thought it was mine.”

It felt so good, Reed wanted another as soon as possible. She got her wish.

“We're ready to tear this up,” she said. “We just needed an opportunity to make it to 115 and get our foot in the door, and now we have it, so we're gonna showcase some really good skill and talent and I'm very confident that my striking is over the top in the 115 division, and I look forward to being able to showcase it. So we're turning it over as quickly as we can.”

If all goes well this weekend, Reed hopes to be back in action in August, and after that, just keep the fights coming for the brick breaker.

“I'm gonna stay active as long as the UFC allows me to stay active and I will keep hitting people until they go down,” she said.