"Becoming a UFC fighter and being the first TUF winner from Canada makes all the hard work I’ve put in and the sacrifices I’ve made worthwhile." - Elias Theodorou 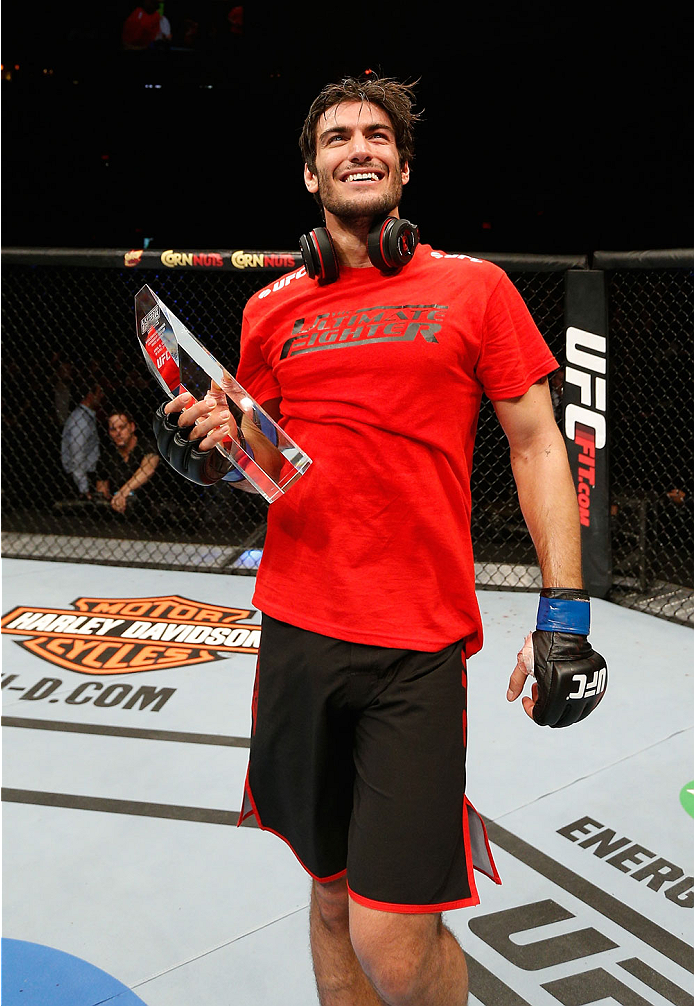 The Ontario native is coming off a dominant run through The Ultimate Fighter Nations: Canada vs. Australia tournament, where he worked an efficient strategy to earn a spot in the finals opposite Sheldon Westcott.  For “The Spartan,” getting through the tournament format injury free was the main goal, and he admittedly sacrificed showmanship in order to reach the finals and put himself in position to earn the coveted six-figure contract with the UFC.

That said, once the Octagon door closed behind him and Westcott in Quebec City, the time to open up the arsenal had arrived. There would be no more tournament rounds to ration his output for, no more delays, and the opportunity to claim his piece of the spotlight had finally arrived. And in the biggest fight of his young career, Theodorou absolutely rose to the occasion. He battered Westcott en route to an impressive TKO finish in the second round of their tilt to become the next Ultimate Fighter.

His performance against Westcott displayed the type of versatility he possesses and Theodorou believes getting a victory in that fashion was the ideal way for him to begin his UFC career.

“Winning that fight and the show means everything to me,” Theodorou shared. “Becoming a UFC fighter and being the first TUF winner from Canada makes all the hard work I’ve put in and the sacrifices I’ve made worthwhile. It validates all the support from my family and friends I’ve received over the past three years of my career.

“As far as the versatility in the finals, I believe I just showed people what I can do. During The Ultimate Fighter I was more of a grappler, but in reality, the ends justify the means. I needed to get the finals. When that day finally came I had the opportunity to show people what I have. And I guess the rest is history.”

While his debut served to get fight fans excited to watch him work, the real measure of progress for those coming off of the show is how they fare in their first step into divisional waters. For Theodorou, who splits time at Tapout Burlington and Grant's MMA, that test will come in the form of Bruno Santos when the organization makes its official debut in Halifax, Nova Scotia for UFC Fight Night: MacDonald vs. Saffiedine on October 4.

Theodorou built solid momentum throughout his time on TUF, and he’s eager to keep that energy rolling on his native soil against a proven talent like Santos. He knows there will be more eyes on him than ever before and Theodorou plans to give them a show on Saturday night.

“I’m very excited because I get to continue to build off that momentum,” Theodorou said. “I worked so hard to get to The Ultimate Fighter and winning the show in the fashion that I did really was great. Now, three months of hard work and I get to go out once again and show everyone all the hard work I’ve put in.

“I’m undefeated right now, and while that isn’t everything, it’s a good sign that it’s so far so good. Even with the wins I’ve had in the past, I’ve always gone to the drawing board and continued to add to my game. I’m always training and I’m not sure if fans know how much of a grind we go through. I did three-a-days for this camp with the final two weeks training later at night to adjust for the time in Halifax. But this is what I love to do. No matter how tough it gets, I wake up and I’m excited to go to work. Even after the toughest training sessions, I’m so glad I went through it.”

Much like Theodorou, the 27-year-old Brazilian is also fairly new to the UFC scene. Santos made his official debut last December in Brisbane, Australia, and despite suffering a setback in his inaugural go inside the Octagon, he was able to bounce back strong in his second showing, edging out TUF alum Chris Camozzi in a gritty affair at UFC 175 back in July, and he’ll come into his bout with the talented Canadian prospect looking to solidify his footing on the middleweight roster.

And while Theodorou can respect his opponent’s wishes and dreams to climb the 185-pound rankings, he’s not willing to give that kind of ground in front of his countrymen. Fight night is Theodorou’s time to shine and he’s confident he will give Santos more than he can handle.

“Santos is a tough dude and he’s a grinder,” Theodorou said. “He’s really good at breaking people out of their game plan. He’s been criticized a bit because he hasn’t finished anyone since his first two fights, but he definitely does what he needs to in order to win. I think his last fight against Chris Camozzi is the classic example of one fighter breaking under another’s game plan. Camozzi could have won the fight if he had just fought his fight and not complained about being taken down and the pace the fight was moving at.

“I’m just going to do me. He’s not the greatest wrestler. Santos is very straight forward. He’s a powerhouse and a bull, but I’m going to be a matador. I’m going to use angles and twirl him around. Let’s also not forget that I’m pretty good against the cage as well. The difference is that I’m looking for the kill and I have elbows, knees and eight deadly limbs to go with that. I’m going out there to show everyone what I’m made of and what I love to do on Oct. 4.”