Elias Theodorou: It's All in the Perspective 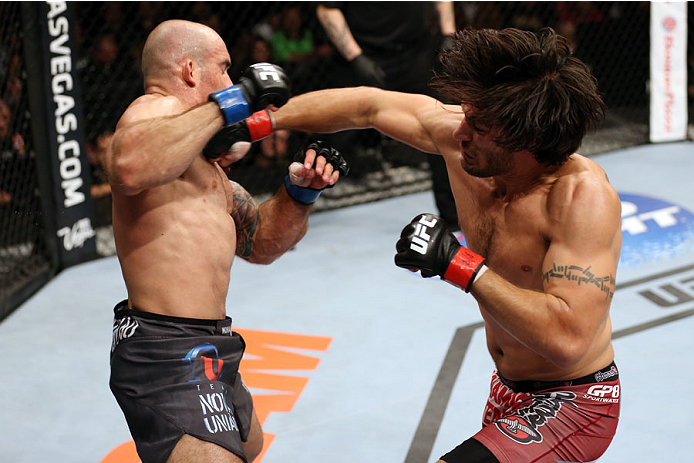 When it was announced that The Ultimate Fighter Nations winner Elias Theodorou’s first fight after winning the show in dominant fashion over Sheldon Westcott was going to be against Brazil’s Bruno Santos last October, there were more than a few groans from the fight community.

Santos was unquestionably a good test, but his smothering style (which resulted in only one fight ending before the final bell) wasn’t the recipe for an exciting fight. In other words, if you were going to kick off the next phase of the charismatic Theodorou’s career, this likely wasn’t the opponent to do it with.

Theodorou didn’t balk though, and while the fight with Santos did go three rounds, the Canadian’s attack did produce a watchable bout. That made it a double-win for the unbeaten Toronto native.

“Getting the W and getting your hand raised is the most important thing, but you’re only as good as your last fight, so I’m very lucky in the idea that I was able to basically put all my efforts into making it an enjoyable fight, especially in the third round,” he said. “It showed my ability to dig deep and showed that I do have a gas tank for days. Honestly, I think my ability won’t really be fully shown until I start doing five round fights, because that’s what I’m built for. For me, this is a marathon, not a race, and the longer I’m in the cage, the better I’ll be.”

Theodorou has been pretty good so far, racing out to an 11-0 record that included a second-round stoppage of Westcott that proved that even though he’s good looking enough to grace the covers of Harlequin romance novels (and he has), that’s no reflection on his ability to fight. So dismiss the self-proclaimed owner of the “greatest hair in MMA” at your own peril.

And even though there is no question that the 26-year-old is a legitimate prospect in the middleweight division, the beauty and curse of this sport is that, as Theodorou pointed out, you’re only as good as your last fight, and on Sunday, the last fight for “The Spartan” will be Saturday night’s bout with Roger Narvaez in Dallas. Unlike Santos, Narvaez is all about the action, and that’s fine with Theodorou, who is all about shutting the Texan down.

“I have a grappler who likes to punch and kick,” Theodorou said of Narvaez. “He’s a southpaw and more plodding, and he’s coming to either throw a power punch or grab me and try and choke me. And I’m excited to basically dance around him and move and break him, just like I did with Sheldon.”

To prep for the UFC 185 matchup, Theodorou made a well-documented trip from Canada to Brazil to work with the legendary Nogueira brothers.

“Along with the great talent and the great opportunity to be there, it was also amazing to dodge part of winter,” Theodorou laughs, still buzzing about the opportunity to train alongside Rodrigo and Rogerio Nogueira. For a fan, as well as a participant, it had to be a heady experience.

“That’s exactly it,” he said. “But with that being said, I’m still trying to win in training. It was a huge opportunity and a huge privilege, and a little bit of the fanboy came out in me just rolling and training with both Nogueiras.”

The nearly month-long stay with Team Nogueira allowed Theodorou to obviously pick up technical knowledge, but in addition, as he got to know two of Brazil’s best MMA fighters, he also saw the enthusiasm they had in helping him.

“They were excited too because I had a goal, I had a fight, and just in my personality, I love what I do,” he said. “They’re obviously martial artists, but I would say both fighters are kind of in that stage where they’re prizefighters, and where the training really doesn’t intensify – although they’re always training – until there’s an actual fight. So to see them being the ones saying ‘we gotta go, we gotta go train,’ it was really awesome to see the excitement in their eyes.”

Fast forward to today, and as you read this, Theodorou is probably not his usual smiling self as he makes the cut down to 185 pounds for today’s weigh-in. But that part of the process doesn’t cloud his love of the game in the slightest.

“This is the part where I don’t love it,” he said. “I still enjoy every single second of it, and even on the hardest days, I’m just so happy when I do complete a session that I didn’t think I could or my coaches do push me to that point. I get to do what I love. Not everyone gets to go to Brazil and train with legends like that, and I put everything in perspective.”

And Theodorou’s perspective at this point in his career is that he’s only getting started.

“This is only my third time in there, so with more wins and more hard work and more cage time, people will start to see what I’m able to do,” he said. “Rome wasn’t built in a day. Nothing can really be said other than what people have seen so far and I’ve just got to give them more and more looks. My goal is to be a different fighter every single time.”