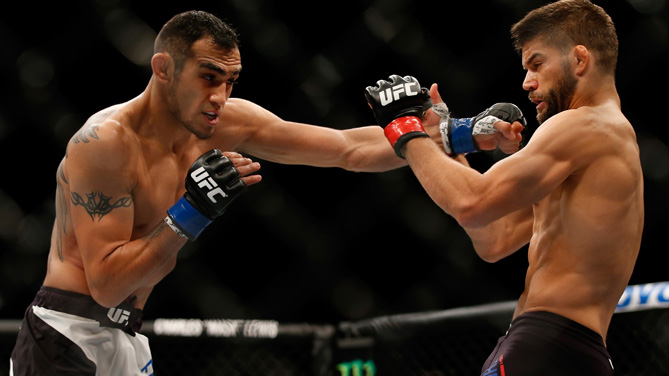 After a long wait, Tony Ferguson finally got his showcase bout against a big name in the lightweight division Wednesday and he made the most of his opportunity, scoring perhaps the most impressive win of his career as he shut out former Strikeforce champion Josh Thomson in the UFC Fight Night co-main event at Valley View Casino Center in San Diego.

Thomson had success dealing with Ferguson’s unorthodox style in the early going, switching stances and even getting in a couple quick takedowns. Nothing deterred Ferguson’s forward motion though, as he primarily used his kicks to get his veteran foe’s attention. With a minute left, Ferguson switched things up with a flying knee, but Thomson caught it and took “El Cucuy” to the mat. Not surprisingly, Ferguson stayed busy with strikes as he looked for submissions from the bottom and Thomson fired off his own strikes from the top.

After the close first round, Ferguson stepped things up in the second, jarring Thomson with a kick to the stomach and then dropping him with an elbow to the head. Thomson weathered the follow-up attack, but Ferguson’s attempt at ending the bout was interrupted when he grabbed the fence and was forced to give up position by referee Herb Dean, who restarted the action. The two proceeded to slug it out, Thomson getting stunned and cut by a left to the forehead. The bout then went to the mat, Ferguson looking for the triangle choke as he delivered elbows to his foe’s head. With 90 seconds left, Thomson pulled free, but Ferguson kept searching for the sub, nearly catching the arm of “The Punk,” who ended the round and standing and swinging at his opponent.

Thomson roared out of his corner for round three and jumped right back into the action, willingly slugging it out with Ferguson, whose gas tank was still on full. By the second minute, a Ferguson elbow opened Thomson up again, with the San Jose product’s face a mask of blood. Midway through, a body kick landed flush and caused Thomson to pause, but not stop, as he gamely continued to battle, refusing to back down, even though the result had become increasingly clear. 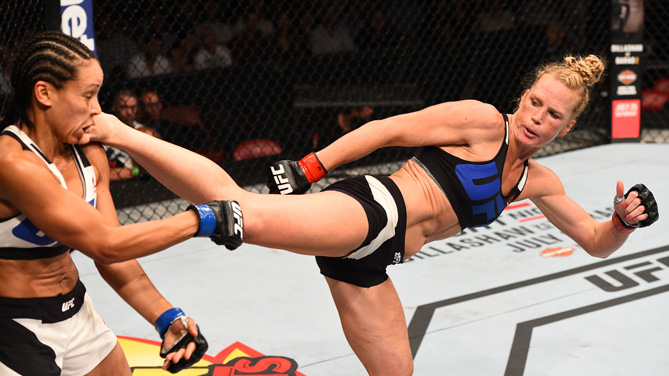 “I’m happy with the win, but I’m one of those fighters who’s never really happy with their performance,” Holm said. “I showed a little bit more than I did in my UIFC debut, but still not as good as it can be.”

The two traded kicks for much of the first round, Holm the much busier striker as she stalked her foe. There wasn’t much significant scoring in the opening stanza until the final 30 seconds, when Holm appeared to stun Reneau briefly with a right kick to the head.

Reneau came out more aggressively in round two but still couldn’t tag “The Preacher’s Daughter,” who countered with solid shots in return. As the round progressed, Holm’s combinations were winning all the exchanges, Reneau unable to fire back in time to catch the former world boxing champion. In the final minute, Reneau tried to jump guard to get the fight to the mat, but Holm just slammed her way out of trouble and banked another round.

There was more of the same in the final frame, Holm continuing to punish the ultra-tough Reneau, who just couldn’t find daylight.

With the win, Albuquerque’s Holm improves to 9-0; Visalia’s Reneau falls to 6-2. 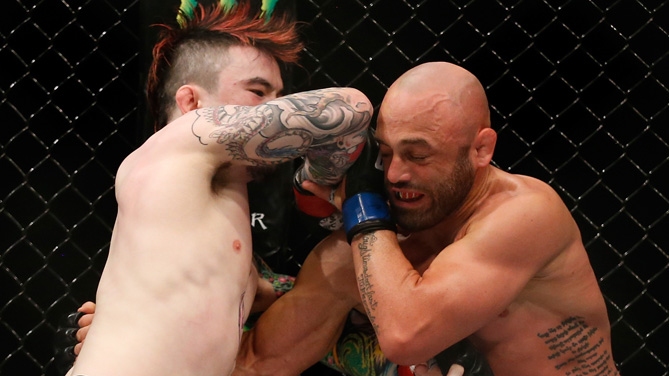 Manvel Gamburyan and Scott Jorgensen put together an entertaining three-rounder in their bantamweight clash, with the Armenian veteran delivering the goods en route to a unanimous decision win.

Jorgensen almost had a short night when he was caught in a guillotine choke in the opening minute, but “Young Guns” smoothly escaped and took control momentarily before Gamburyan began using his strength to stay in charge of the action both on the mat and in the clinch. With under two minutes left, the two traded punches against the fence, Jorgensen landing a hard shot, but Gamburyan dropping the Idaho product with a right hand. Jorgensen recovered quickly though, avoiding Gamburyan’s haymakers until the horn.

The high-level action continued in the second and third, neither fighter putting together any consistent scoring streaks, but both mixed up their attacks nicely, Jorgensen staying out of serious trouble and doing well on the feet, while the stronger Gamburyan was able to win the grappling exchanges and get in enough strikes to keep his opponent honest.

With the win, Gamburyan improves to 18-9 with 1 NC; Jorgensen, who was returning to the bantamweight division after a run at flyweight, falls to 15-11. 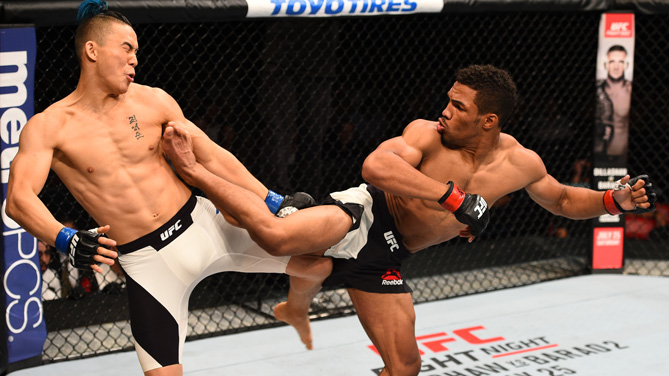 “The Motown Phenom,” Kevin Lee, made it four straight wins in his lightweight bout against James Moontasri, submitting his foe in the opening round for his first finish since November of 2013.

“I knew what was going to happen before the fight started,” Lee said. “I think everyone could see that coming.  I can take down anyone in the division and I wanted to stand and strike with him.  James is a top striker and I wanted to show people that I could strike with him.   But Jiu-Jitsu is the main part of my game.  That’s four straight wins in the division and I want a top 10 guy.”

The 22-year-old Lee was impressive from the start, using his striking game well and showing how that aspect of his attack had improved. Once that was established, the Michigan native closed the distance, put his foe on the deck, and what followed was the rear naked choke that forced Moontasri to tap out at the 2:56 mark. 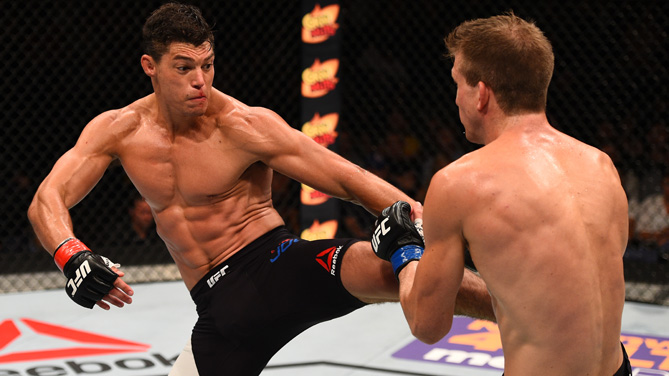 After a slow start to the night in San Diego, welterweight up and comers Alan Jouban and Matt Dwyer got the crowd up and roaring with an exciting three-rounder won by Jouban via unanimous decision.

In the second minute, Jouban walked into a right hand and hit the canvas. Dwyer looked for a guillotine, but Jouban pulled free and settled into his foe’s guard for a bit before rising. Jouban was having issues getting inside on the lanky Canadian, and while he did trap his foe late in the round and get into a heated exchange that favored him, an illegal knee to the head of the downed Dwyer cost Jouban a point from referee Herb Dean.

Now forced to fight from behind, Jouban went on the attack in round two, first calmly, then relentlessly, and when Dwyer gave him an opening, he pounced, first with a kick to the head that hurt his foe with a little over a minute left, and then with some body shots before he caused the crowd to erupt with a right cartwheel kick that rocked Dwyer just before the horn sounded.

That’s not to say that Dwyer was out of the fight, because every shot landed by Jouban saw the Kelowna product slugging back, trying to get even. In the third, the back and forth action continued, but once Jouban got close, he ripped off a flurry and took the bout to the mat. More heated action commenced, Jouban trying to pull off the finish, but running out of time.

“I called out Matt because I knew we would put on an exciting show to kick off this main card,” Jouban said. “I’m happy with the outcome.  I was a little worried with the point deduction and knew I would have to bring it the last two rounds.  It (the foul) was nothing intentional.  I want to get right back in and fight two more times before the year is out.  I want this to be my year.”