“With Frank you just have to be prepared for anything. When I go into fights I just try to impose my will and not worry about what the other guy is going to do.” - Roy Nelson 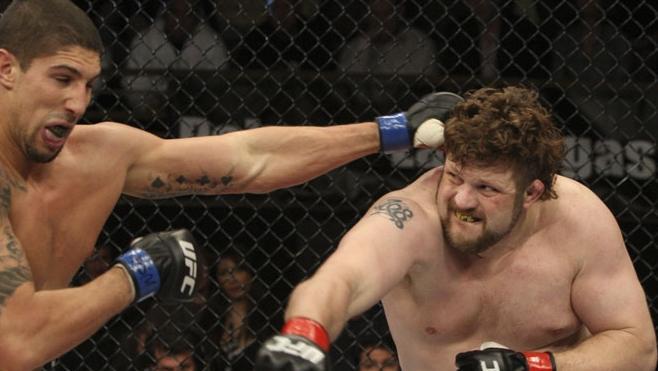 Roy Nelson, however, says that's not exactly the case.

“I know who Frank is and Frank knows who I am,” said the heavyweight contender, who has trained with his fellow Las Vegan sporadically in the past. “We know a little bit about each other’s personal history. Have I ate at Frank’s house? No. Are we business acquaintances? Yes. But it’s not friend versus friend. Friend versus friend is somebody that wants what is best for their friend -- that will sacrifice for their friend. Me and Frank are not that kind of friends.”

Though highly complimentary toward his UFC 130 opponent, Nelson (16-5) probably won’t lose any sleep if he manages to derail Mir’s bid for a third UFC championship. He is also keenly aware that Mir, owner of eight UFC victories via first round stoppage, is as dangerous as they come.

“You’ve always got to be scared of Frank,” Nelson said. “He’s got a true mix of martial arts. He’s good in every aspect. He’s knocked out (Mirko) Cro Cop. Frank’s even said he’s bigger and stronger than (Junior) Dos Santos, so I’m assuming he hits harder.”

The intimidating knockout artist that is Dos Santos, you might recall, battered Nelson with heavy punches over three rounds at UFC 117. Yet “Big Country” impressed many and perhaps saw his stock rise by exhibiting exceptional toughness and charging forward and courageously winging punches until the final horn. While onlookers admired his survival skills, Nelson didn’t draw any moral victories from his gutsy performance.

“The biggest thing I learned from the Dos Santos’ fight is that you’ve got to have offense,” he said. “You’ve got to punch him more than he punches you. It’s that simple in the fight game.”

(Incidentally, for anyone wondering, Nelson likes Dos Santos to beat Shane Carwin next month in Vancouver at UFC 131. The basis for his prediction? “Just because he beat me,” Nelson said).

Speaking of prognostication, Nelson also predicted months ago that Brock Lesnar would end up bowing out of his scheduled UFC 131 matchup with Dos Santos. His foresight powers have not gone unnoticed.

“A couple days ago I was named the Nostradamus of MMA so I’m just really good at predicting the future,” the 34-year-old said. “It’s just like how I see myself being UFC champion.”

Winner of season 10 of The Ultimate Fighter, Nelson is a former International Fight League champion who turned pro in 2004. Only a year earlier he had faced Mir in a renowned Grappler’s Quest submission wrestling match that has since garnered nearly 400,000 views on YouTube. Mir started quickly, scoring a takedown, but gassed late. Nelson dominated the rest of the way en route to a 15-2 win to advance in the Absolute Division.

Today, both men are Brazilian jiu-jitsu black belts under reputable instructors; Mir under Ricardo Pires, Nelson under Renzo Gracie. But the 2003 victory means little to Nelson these days.

“It was, what, eight or nine years ago? We’re doing MMA now and I’m a bigger and fatter guy now,” Nelson said.

Nelson’s memory of their oft-cited grappling match goes like this:

“He scored the first two points and then tried to submit me,” he said. “It just lit a fire under my belt from then. Right after that I tapped out Brandon Vera and then I beat Diego Sanchez 19-2.”

Nelson has conceded in interviews that Mir’s jiu-jitsu skills, as it relates to MMA, are superior to his. In fact, statistics indicate the same, since Nelson hasn’t submitted anyone in a live MMA bout since 2006, yet has TKO’d seven opponents.

“If we’re talking MMA, he has more submissions than I have,” Nelson said of Mir. “Frank is a two-time UFC champ and is a living legend of the UFC heavyweight division. I like to think that I might be able to fit in that same category. But he’s a two-time UFC champion so I’m just lucky to be in the same room with him.”

They last trained together “years ago,” Nelson said.

“With Frank you just have to be prepared for anything,” he said. “When I go into fights I just try to impose my will and not worry about what the other guy is going to do.”

Some presume that Las Vegas bragging rights will be at stake. Nelson downplayed that as a motivation, saying, “The only thing is that whoever wins will have gym rights. He’ll get to dictate when he can train and when he can’t train” at area gyms.

Nelson expects to enter the fight right around the 265-pound weight limit. A week or so before arguably the biggest match of his career, Nelson conceded that he had hit up Taco Bell the night before for a taco and bean burrito. But in the next breath he said he cooks at home regularly and avoids “anything that is unhealthy.” Yes, his belly protrudes and draws a lot of attention. And Nelson is not afraid to poke fun at his robust frame, but claims his fat guy shtick is more of a marketing ploy to entertain fans.

“Being a UFC fighter or somebody in the entertainment business, you want to have attention because the more fans you have the more money you can make,” he said. “So if it’s my size, my fighting skill, I really don’t care as long I’m making fans happy and they consider me an inspiration.”

Could he lose the belly if he dieted better?

“When I came out (as a newborn) I had a belly. It’s genetics. We can just chalk it up as baby fat. As long as my chest sticks out farther than my stomach then I’m OK. The thing is that it’s flat but I stick it out for the camera. It’s movie magic, that’s what I call it. Everybody likes to know how movie magic works. It’s what makes me special.”