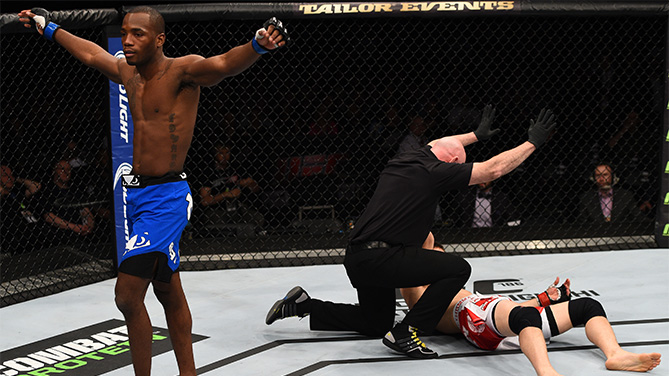 Baczynski started throwing punches as soon as the bout began, but “Rocky” was unmoved by the fast start, as he simply saw an opening and fired a left down the middle that landed flush. Baczysnki fell to the canvas, with a second left hand finishing matters and bringing in referee Grant Waterman to stop the fight.

Birmingham’s Edwards improves to 9-2 with the win; Baczynski falls to 18-11.

All three judges saw it 30-27 for “The Butcher.”
Three big takedowns kicked off the fight for Fabinski, and after the third, he was able to keep the South African grounded for a bit, allowing him to take McLellan’s back and get some strikes in. With 90 seconds left, McLellan got free, but only briefly. Yet after Fabinski slipped to the mat, McLellan locked in a guillotine choke and pulled guard, giving him some much needed points before the horn sounded.

There were few fireworks in the welterweight bout between Curitiba veteran Sergio Moraes and French debutant Mickael Lebout, but Moraes picked up the win, earning a close unanimous decision.

A few landed haymakers and a takedown in the closing seconds may have been enough for Moraes to steal the first round, though the newcomer from Paris was competitive throughout. In the second, Lebout’s striking continued to impress, and though he wasn’t doing enough to put the Brazilian in trouble, he was scoring points. Moraes sealed the fight with his ground game in the third, capping off a workmanlike win.

Despite a spirited effort from Lodz’ Damian Stasiak, veteran Yaotzin Meza had too much for the Octagon newcomer, winning a clear-cut three-round unanimous decision in a featherweight bout.

Meza’s greater Octagon experience was evident in the early going, as he showed off a solid ground game, but the game and resilient Stasiak soon got acclimated to his new home and after landing a hard kick to the body, he got the fight back to the mat and nearly finished his foe with a rear naked choke until Meza got loose and made it to the end of the round.

The second round was all Meza (21-9), who again controlled the ground action, and little changed in the third, as Stasiak (8-3) was game throughout but unable to stop the Arizonan’s mat attack.

Both fighters came out throwing bombs, with Hamilton winning the first exchange when Omielanczuk stumbled to the deck. After that furious start, the “Freight Train” bulled Omielanczuk to the fence and fired off strikes from the top position for the rest of the round, primarily to the body.

Hamilton put Omielanczuk back on the mat early in round two, but the Warsaw product got back to his feet quickly. Hamilton kept the pressure on, but with two minutes gone, Omielanczuk finally began to find his way to the scorecards, as he landed several hard close-range strikes and then got a takedown. Hamilton got a late takedown of his own though, leaving it up to the judges to sort out the close round.

There was more mauling than brawling in the third, with Hamilton in control against the fence, and it was American’s greater work rate that secured the victory.

Moscow’s Alexandra Albu impressed in her long-awaited UFC debut, submitting Warsaw’s Izabela Badurek in the second round of their strawweight bout.

Albu’s crisp 1-2s immediately reddened Badurek’s face, but eventually the Poland native was able to close the distance and clinch against the fence. There, Badurek (5-3) sought a takedown, but Albu wasn’t interested, leading to a nearly round-long stalemate.

Dominating much of the second round with her striking, Albu (6-0) looked to be heading to a big win until a takedown by Badurek appeared to turn the tide. It didn’t though, as Albu sunk in a guillotine choke that forced Badurek to tap out at the 3:34 mark.

Submission specialist Bandel tried to get the fight to the mat in the first, but instead it was Ray dominating on the canvas, as he bloodied Bandel’s nose and sunk in a tight arm triangle. The horn appeared to save Bandel, but as soon as the second commenced, the Lodz native again shot in for a takedown, Ray defending well and nearly sinking in a rear naked choke. Moments later, the bout went back to the mat, with Ray landing a series of unanswered ground strikes that brought in referee Leon Roberts to halt the bout at the 1:35 mark of round two.

Lapilus had an impressive first round, avoiding Lee’s attempts to grapple by using a varied striking attack from long range, and when Lee was able to close the distance, Lapilus’s ability to lock up his opponent’s neck kept the points piling up.

Lee got Lapilus to the mat in the second, but the Frenchman got up to his feet with little difficulty, and it was back to his effective stick and move strategy, which also drew blood from Lee’s nose. The action stalled in the third, but Lapilus, still in control, did put an exclamation mark on his performance with a takedown of his foe in the closing stages of the bout.