Efrain Escudero: What's the Worst That Can Happen?

"I think this is the time where I’m going to make a run, but I’m also going to have fun with it." - Efrain Escudero 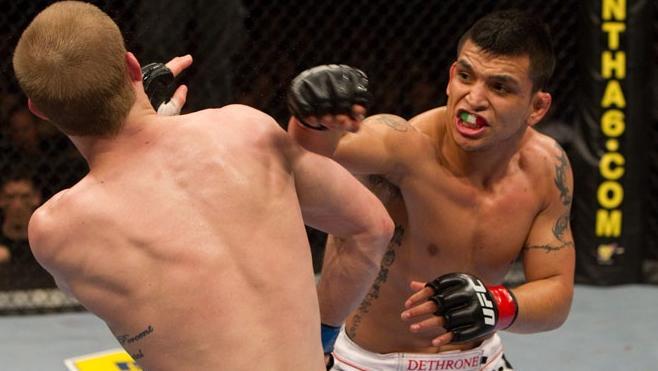 The experiences in your life shape your perspective on things and that holds true in fighting just as it does everywhere else.

When you’re rising up the ranks, reaching the UFC stands as a career benchmark – a goal to strive for and an achievement that makes those long days in the gym and tough fights for not enough money on the regional circuit all worth it.

Once you’ve reached the biggest stage in the sport, staying there and steadily climbing the ranks becomes the new focus, with reaching championship heights representing the greatest accomplishment any fighter in any situation could fathom.

But the road from the regional circuit to the top of the food chain in the UFC is filled with detours and roadblocks, twists and turns, and along the way, reality can hit like an unexpected liver shot, forcing athletes to recalibrate their dreams and shifting the way they look at the sport and their careers.

Efrain Escudero appeared to be on the fast track to reaching those lofty goals everyone starts out with when they begin their careers.

After amassing a 10-0 record fighting primarily in his home state of Arizona, he was selected as a contestant on The Ultimate Fighter, landing as a member of Team Nogueira on Season eight of the long-running reality TV competition. Escudero made his way to the finals, where he would face and defeat fellow Team Nogueira representative Philippe Nover to punch his ticket to the UFC.

A first-round technical knockout win over Cole Miller followed, elevating his record to 13-0 and positioning the 22-year-old as one to watch in the talent-rich lightweight division. Five years and 18 fights later, Escudero is poised to return to the UFC for a third time this weekend, when he’ll square off with TUF Brazil season two winner Leo Santos.

“When I won The Ultimate Fighter, I was 22 years old and your life changes completely,” offers a reflective Escudero, now 28 and sporting a 23-8 record heading into Saturday’s matchup with Santos. “I went from being an average college student to now I was able to buy myself things. I was able to have a full refrigerator 24/7. It didn’t affect my hunger, but I was having fun and going with the flow and (trying to adjust) – being a 22-year-old, you know? Of course there are going to be a lot of distractions and growing up (that you need to do).”

Following his win over Miller, Escudero split his next two appearances – losing via submission against Evan Dunham before rebounding with a victory over Dan Lauzon at UFC 114.

Four months later, he was paired off with Brazilian prospect Charles Oliveira in the co-main event of a televised Fight Night card in Austin, Texas. It was a pivotal bout for the former TUF winner, and rather than rise to the occasion, Escudero stumbled, missing weight and coming out flat, ultimately succumbing to a standing rear-naked choke in the third round. He was released from the organization shortly thereafter.

Five wins in six fights on the regional circuit earned him a return trip to the Octagon, but consecutive decision losses to Jacob Volkmann and Mac Danzig prompted the organization to once again give the former Ultimate Fighter winner his walking papers.

“The second time around, I don’t know what happened,” he says. “I came up as a late replacement, lost that fight and then I fought again against Mac Danzig in Atlanta. I had a bad night and I think it was because I had a lot of things going through my head – I just had a kid, I was having drama and problems at home and once your mind isn’t 100 percent there, you’re automatically (going to be affected).”

Nearly two-and-a-half years removed from loss to Danzig at UFC 145, the former prospect has once again been called back to the Octagon. Initially tabbed to face Francisco Trinaldo, the now 28-year-old lightweight has since moved up the fight card to face Santos on the main card of Saturday’s event in Brasilia.

After showing so much promise early in his career, the ups and downs of the last five-plus years have shifted Escudero’s outlook on his craft and changed the way he’s approaching his third tour of duty on the UFC roster.

“Here’s what I told myself: I’m only 28 years old. I have a college degree. I have made it to the UFC on three different occasions. What’s the worst that can happen in a fight? Evan Dunham broke my arm and I didn’t tap. I was hungry. There are people that dream (about their ideal situation) every day and I think I’ve fulfilled (a lot of my dreams). I have a wonderful family, a wonderful daughter.

“I think this is the time where I’m going to make a run, but I’m also going to have fun with it,” he adds. “What’s the worst that’s going to happen? I’ve been cut from the UFC twice – both times sucked and I know how badly it hurts. I’ve cried. I’ve bled. I’ve been tired. I’ve been broken down. This time, I’m going to enjoy the whole ride and I’m going to ride it until the wheels fall off.”

And that begins – for a third time – this weekend against Santos. While a late shift in opponents might rattle a newcomer or a fighter with his back against the wall, Escudero is taking it all in stride.

He’s been here before and whether he’s facing Santos, his original opponent Francisco Trinaldo or a Brazilian legend, nothing changes come fight night.

“I still have to walk into that cage and the door is still going to close – it doesn’t change anything,” he offers. “I don’t care who it is. They could put Anderson Silva in there. I’m going to be a little scared on the other side, but I’m still going to come out swinging.”

After all – what’s the worst that could happen?