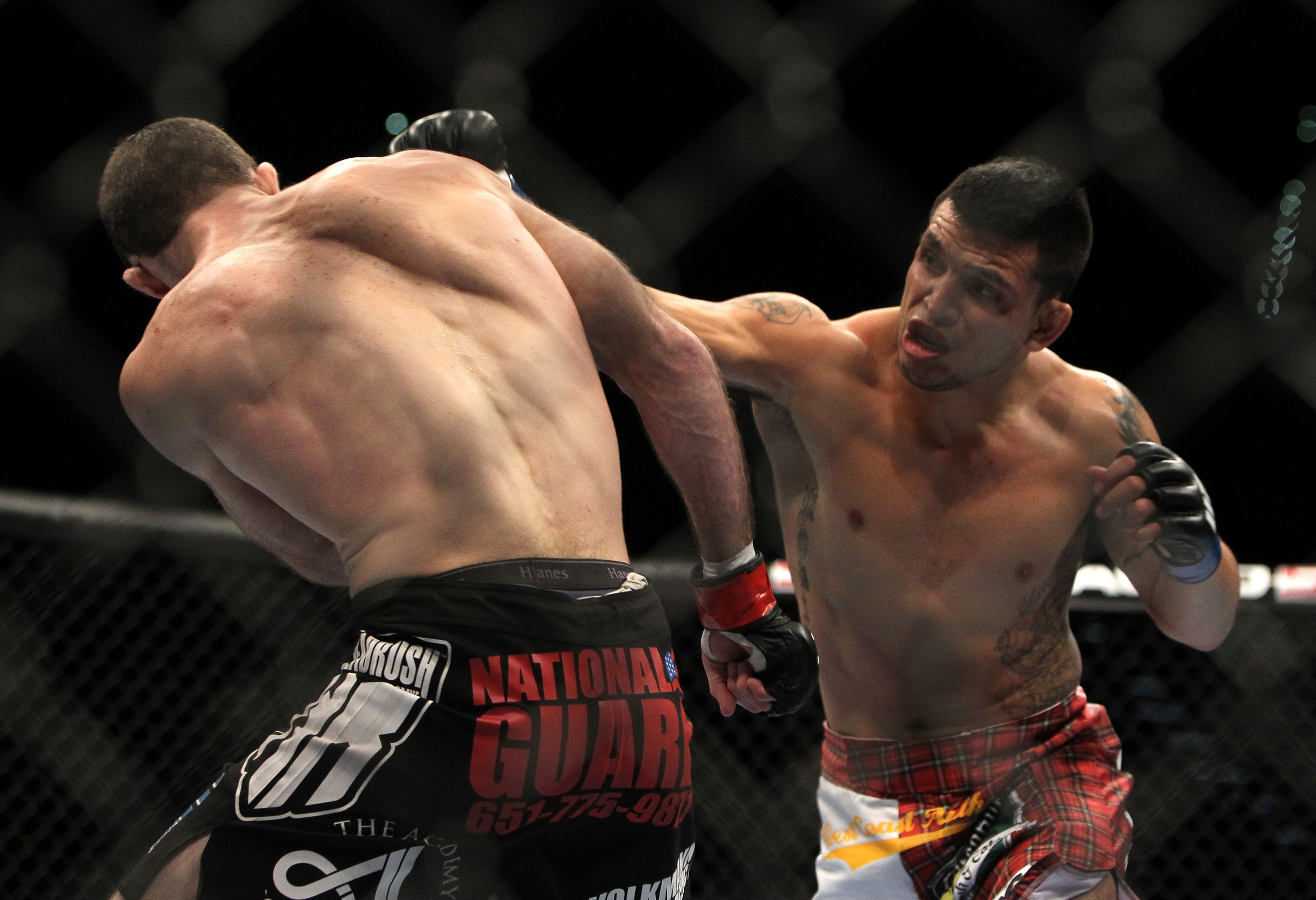 When a professional athlete rebounds from a slump or a setback, the easiest conclusion to jump to is that they added something “new”. A change in routine, mindset, workout, technique or anything that has been recently tweaked by the world’s latest and greatest ideas.

For many, this is the case, but for others, like UFC lightweight Efrain Escudero, rediscovering what they did in the past is how they progressed in the future. For “Hecho en Mexico”, the journey back to the Octagon was accomplished by fighting for the reason that originally drew Escudero to the sport: because it was fun.

“When I fought outside of the UFC, in every interview I did it would say, ‘this is the new and improved Efrain’, but the only thing ‘new and improved’ meant was winning the next fight,” explains Escudero. “What really was winning was me being the ‘old Efrain’. The guy who went into The Ultimate Fighter, the guy who didn't care, the guy who just fought and enjoyed every moment of it. I'm back to being the same old Efrain. I'm the kind of guy who goes out there and has fun with it. In the Charles Oliveira fight, I put a lot of pressure on myself not making weight, and doing the things I had to do before. That kind of hurt me and it was stressing me out. I'm fighting in the second round, but I'm still thinking I didn't make weight. My coaches are telling me to 'wake up' or 'do something'. I didn't enjoy that fight because I didn't make weight and because I did put a lot of pressure on myself. I have to go back to being the Efrain who went onto The Ultimate Fighter - that's who I am.”

At 26 years old, the Mexico native and graduate of Grand Canyon University in Phoenix is ready to make even more of an impact in his second stint in the UFC than he did in his first. Fight fans specifically remember him for winning the eighth season of The Ultimate Fighter by submitting three lightweights in the house and scoring a unanimous decision over Phillipe Nover in the finals. After the show, he went 2-2 inside the Octagon and was subsequently cut following his loss to Oliveira, before which Escudero missed weight. A little over a year later, he got the call to come back to the UFC after going 5-1 in smaller shows and rekindling that initial cagefighting fire.

“I went back and saw my old tapes, my old highlight videos, and what I did in them - I had fun,” states Escudero. “Every time I went to the cage I was having fun. I wasn't scared, I wasn't nervous, I was ready to have fun. Getting called back up to the UFC, I had fun having to bust my butt again to get back where I belong.”

Part of Escudero’s return visit to his old self was oddly enough through transforming himself into one of his division’s best: former UFC champion Frankie Edgar. For the past three years, Escudero’s home gym has been the MMA Lab in Glendale, Arizona under head coach John Crouch. Easily, the most famous member of their fight team is current UFC title holder Benson Henderson. To help prepare “Smooth” for his belt winning showdown with Edgar at UFC 144, Escudero was put to the task of mimicking the then-reigning champion when battling his top-ranked teammate, and he is looking forward to doing it again before Henderson and Edgar’s rematch for the belt.

“It wasn’t easy,” affirms Escudero. “I emulated Frankie Edgar a lot. I looked at a bunch of his videos and movements. I'm not going to lie, Ben beat me up so bad in practice because I'm not used to moving like Frankie. I gave him the look and Ben did exactly what we wanted him to do - win the belt and bring it home. I got it down to a science. When it came to me emulating Frankie Edgar, I knew which punches he threw, which kicks after which punches, how he moved, how he came in. I figured him out pretty good. At some points, I was hurting because that's not my style, but I was able to learn a lot from it and I'm excited to do it again. Ben’s work ethic inspires us and it has kind of rubbed off on me. And when he needs me to emulate one of the best like Frankie Edgar and I can give Henderson a good run - it does build me as a fighter. It makes me know more stuff. Not anybody can move like Frankie. I sure tried and I got it down.”

While Henderson’s bout for the belt was a success and “Hecho en Mexico” did get a second shot in the UFC, Escudero’s first fight back inside the Octagon didn’t go as he had hoped. At UFC 141, Escudero took on three-time NCAA Division I All-American wrestler from the University of Minnesota Jacob Volkmann. It was far from pretty, but Volkmann won his fifth straight in the UFC at 155 pounds by holding Escudero down in the opening two rounds and outlasting Escudero’s tight power guillotine choke in the third. The loss is only Escudero’s fourth against his 19 wins, and will be used as motivation for his future opponents.

“We have to win every round, every scramble, and every position possible,” asserts Escudero. “We always have to work for the finish. In the third round, I was a couple seconds from winning that fight. We can never stop fighting, never stop moving, never stop trying to win. We have to know that people will try to take you down and we'll find ways to win. Now, I need to go out there with the next gameplan and execute it.”

Up next for Escudero is a clash with a fellow TUF winner in Mac Danzig at UFC 145. Danzig is coming off back-to-back bonus earning bouts: a “Knockout of the Night” win over Joe Stevenson and a “Fight of the Night” decision loss to Matt Wiman. Both fighters are known to be well-rounded scrappers with a penchant for submissions, as each own at least half their wins by sub (Danzig 11, Escudero 13). They’re two skilled fighters who are coming off losses, eager to prove themselves in a bout that has all the makings of the proverbial three round war.

“He is a great fighter,” tells Escudero. “You're not like, ‘oh Mac Danzig, you have to watch out just for his jiu-jistu.’ No, he's a guy who goes out there and throws his hands, throws his kicks, and takes you down. He's not afraid of being on the ground and he's not afraid of standing up. I'm excited. I'm back to my competition mode. Mac Danzig is an Ultimate Fighter winner and I'm an Ultimate Fighter winner, so that puts a little more into it competition-wise, and that makes me go back to my days of wrestling when a state champion wrestler was wrestling another state champion. It's fun. It doesn’t bring pressure, but excitement for me to be ready. I know Mac Danzig is going to be ready. But I hate losing at ping pong, I hate losing at thumb wars, I hate losing at anything.”

On April 21st, these two former TUF winners are on a collision course. “I want people to be like, 'did you see that fight?!’” says Escudero, who is ready to take a trip down memory lane and start winning inside the Octagon like the “old Efrain”. “It was a well-rounded fight with takedowns, punches, submission attempts, and that’s what I want. I want to go out there and just have fun. At the end of the day, it's me and Mac Danzig and we're going to be in the Octagon and we're going to have fun.”

Trading punches and kicks inside a cage may not be the typical definition of a good time, but watching Danzig and Escudero do it will be fun for all fight fans.