Edwards Still Practicing the Modern Art of the Beatdown

“Yes, you do have to win, but there’s a benefit to being entertaining and really fighting your style." - Yves Edwards 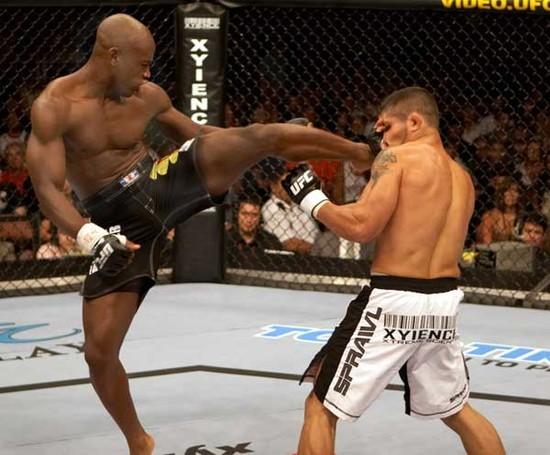 When Yves Edwards starts explaining the creation of Thug-Jitsu with the words “It’s one of those things like the Big Bang theory,” you just know this is going to be good.

And it is. But we’ll let the creator of this mysterious art continue.

“That (the Big Bang theory) was a phrase they came up with because scientists thought the universe started through a big explosion, and some guy came along and said ‘they want to throw this Big Bang theory out there’ and he tried to use it as a diss, and it just kinda stuck,” said Edwards. “Back in Houston back in the day, it was a real jiu-jitsu town, and it still is pretty jiu-jitsu oriented. People were like ‘if you want to learn some good jiu-jitsu, you go train with this guy or this guy. But if you want to learn that Thug-Jitsu garbage, you go train with Yves and those guys, because they like to punch people.’ (Laughs) I liked it and it just stuck. It kinda hit me – Thug-Jitsu, that’s the modern art of the beatdown.”

Years and years later, the 35-year old Edwards has not let up in his practice of the art, and this Saturday night in Washington, D.C., he’ll get to show it off again when he faces Rafaello Oliveira. This will be the 59th time the Bahamas-born Texan will walk up those four steps to compete in a pro mixed martial arts bout, and though he’s not the same person he was as a fresh-faced 21-year old making his debut in 1997, some things haven’t changed.

“It’s a little different,” he said. “Before, as a kid, I used to be like ‘man, I’m fighting this week, I’m all excited.’ Now, I don’t think about it too much, but when I do think about it, that’s when I get really excited. I came home for a few days (before leaving for D.C.), and I walk around the house and I’m going ‘yeah, this is good.’ Then my wife starts cooking something and I’m like ‘I can’t eat that.’”

Edwards laughs, knowing that in this game, you have to be able to take the good with the bad. Yet surprisingly, he says burnout has never entered the conversation.

Is that the secret to his longevity?

“I think that’s a part of it,” said Edwards, 40-17-1. “It’s been pretty good to me physically, and I’m trying to make it good for me financially also. I just love it. When I think about fighting itself, the most miserable time is when someone’s on top of me and I just can’t get them off me (Laughs), and even then, I’m having a good time.”

Yet for all the good vibes around his career, everything came to a screeching halt at UFC 131 in June, when he was knocked out cold by Canadian banger Sam Stout. Edwards had been on the wrong end of knockouts before (against Jorge Masvidal and KJ Noons), but nothing like this. He accepts it as part of the game, but having to explain it to his wife and two kids is another dilemma in itself.

“My wife is really understanding, so that part is easy,” said Edwards. “The kids, that’s when it gets kinda scary, because you see something like that – I’ve seen it for years – and it looks so devastating. When it happens, it sucks, but it’s not as physically bad as it looks. I think I’ve been able to explain that to everybody. They see I’m still the same guy. I guess it’s a good thing that they love me regardless.”

Thankfully, Edwards bounced back quickly from the defeat, accepting a fight with a familiar face in Brazil’s Oliveira.

“I trained with him for a week about two years ago,” said Edwards. “The guy’s tough, and I see some improvements in his game since the time we trained together. It’s like the evolution of the classic striker vs. grappler match where he’s a little more comfortable striking than the typical Brazilian Jiu-Jitsu black belt five, ten years ago, and I’m a lot more comfortable on the ground than the typical striker was five, ten years ago. When I look at him, I just see a tough guy that’s just begging me to punch him in the face.”

Winner of three of his last four and six of his last eight, Edwards has been going through a career resurgence that he hopes has only taken a minor detour with the loss to Stout, yet with this recent success, he’s found out that to many newer fans of the UFC, he’s just another “new guy.” That’s something incredulous to diehard fight fans who remember Edwards as one of the top 155-pounders on the planet in the early years of the new millennium. But when his crowning Octagon moment took place at UFC 49 in August of 2004, as he scored a highlight reel knockout of Josh Thomson, it was the last lightweight bout in the UFC for nearly two years. Now he’s trying to make up for lost time in a sport that is hitting the mainstream like never before.

“The game has changed so much, it’s so huge right now, and if the game was the same six, seven years ago, it would be a different thing,” he said. “My name would probably be in league with a guy like Chuck (Liddell) or close to it. But that’s not when I hit my hot streak. So I’m trying to hit it now. I’m okay with it though. I do this for two reasons – the first reason I do it is because there’s nothing in the world I’d rather be doing with my own time and with my own choices because it’s the most fun thing in the world to me. And the second reason I do it is because it helps me put food on the table and be comfortable. The fame and everything else that comes with it, I don’t care. Back when PRIDE was around, I used to love going to Japan and fighting, and my reason was because I could be popular in Japan, and then I could come home and just be some guy at the mall. I don’t mind that (the popularity), and I understand that comes with success, and I do want to be successful, but it’s not something I aim for.”

What Edwards does expect to hit every night are the kinds of fights that leave fans talking as they leave the arena as well as at the water cooler on Monday. And if he can keep doing that, he’ll keep spreading the Thug-Jitsu gospel to the masses. What could be better than that?

“One thing I like about the current UFC is that job security comes from being entertaining and going out there and laying it on the line,” he said. “Yes, you do have to win, but there’s a benefit to being entertaining and really fighting your style. And to me, that’s my style; I cannot win a boring fight. If a fight’s boring, it’s probably because I’m losing.”