“There was a spot where I think my game didn't evolve much, but in the past year or two years it has evolved again and I'm starting to get back to shooting for the front of that curve.” - Yves Edwards 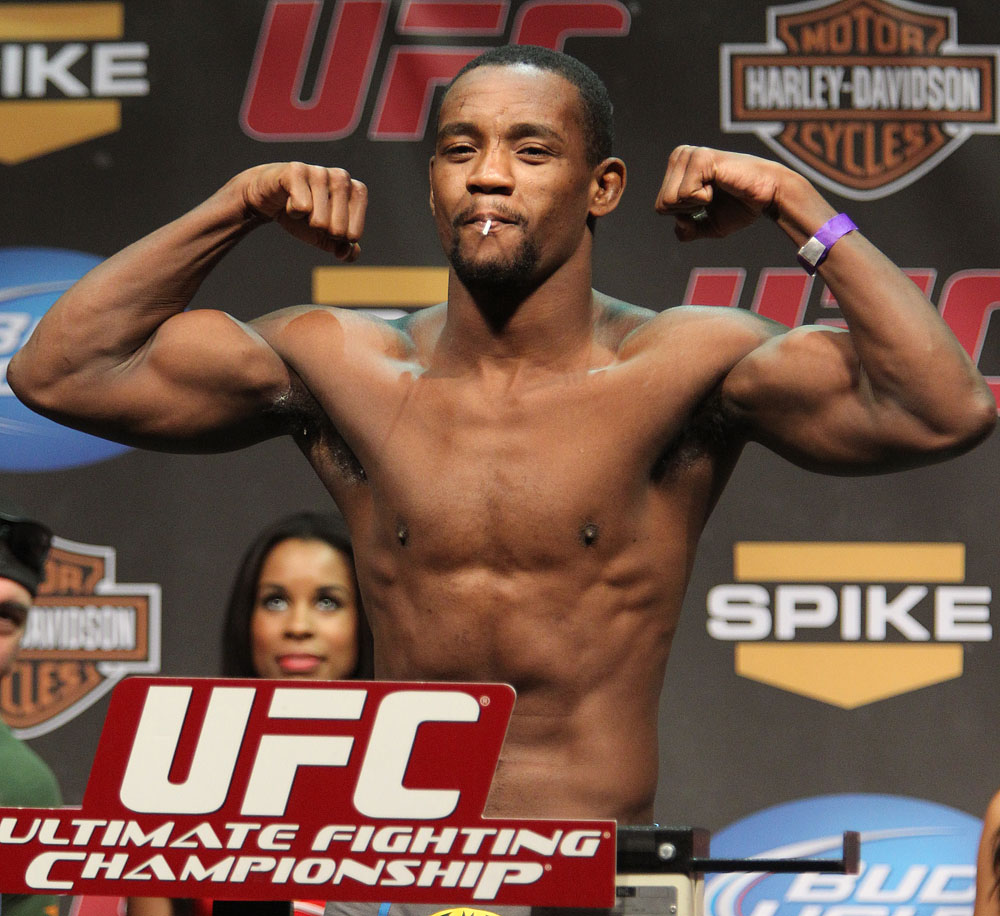 Yves Edwards isn’t scared of Sam Stout. Actually, Edwards isn’t afraid of any 155-pound fighter the UFC has on their ultra competitive roster. He’s a seasoned veteran with almost 60 professional MMA fights under his belt, and has stood toe-to-toe in combat with competitors from nearly every inch of this planet and not batted an eye. Edwards isn’t frightened or startled or intimidated by any lightweight opponent the UFC throws into the Octagon with him.

Unless that opponent is on fire or a zombie.

The 34 year old native of the Bahamas fully admits he is spooked by two things: fire and zombies. “I really believe zombies are a realistic possibility,” states Edwards, who has a surprisingly rational origin story for zombies and an outbreak of it in our lifetime. “Patient zero will start out of someone's gym. A guy has their dog in the gym, the dog gets a staph infection, the dog gets bit with rabies, some type of cross breeding with the staph and rabies happens and then the dog bites the person because the dog goes crazy. The person goes to the hospital and this crazy strain of staph/rabies turns them into a zombie and it all started right there in somebody's gym.”

This is clearly a disconcerting theory for the American Top Team lightweight, considering he is a professional athlete who trains in several fight gyms all around the nation. Edwards is currently knee deep into his 14th year in MMA and has secured back-to-back wins since his return to the UFC last September. Even with all of this fight experience including a distinguished 40-16-1 overall record, Edwards knows his patented brand of “thugjitsu” is no match for the walking dead.

“You can't armbar a zombie. You try to armbar a zombie and it will bite you on the leg. You can't do jiu-jitsu with a zombie. Kickboxing might help a bit. At the same time, I'm a ‘germaphobe’. I'm afraid I'll get scratched and infected. I could kick the zombie in the head and his head explodes and I'll get zombie juice on me and I get infected because I have a scrape somewhere. It's kind of scary.”

Luckily for Edwards, at UFC 131 in Vancouver, Canada he will not be squaring off against a brain hungry zombie. Instead, Edwards will face the equally menacing “Hands of Stone” Stout. With his 17-6-1 record, the kickboxer turned MMA fighter has been a fixture of the UFC’s ever expanding lightweight division for the past five years. The most impressive stat of Stout’s Octagon career is him receiving four “Fight of the Night” awards.

“That tells me he is always in it. It tells me there is never a second where he is not prepared to fight, not ready to fight and not trying to win. Look at the guys he's fought. Spencer Fisher, Jeremy Stephens, Matt Wiman, Joe Lauzon, Rich Clementi are all tough guys who go in there and are ready to throw down. Then you watch the fights and every minute he is in it to win it. Even the fights he is obviously down on the scorecards, he's still fighting his ass off come the third round. He fights the third round like he fights the first round. He's always there, he's always dangerous.”

Stout’s main weapon is his standup, which has been honed by famed striking coach Shawn Tompkins. But the two attributes that keep Stout alive and well in these cage wars lie elsewhere. “The kid has a great chin and he's got great conditioning,” Edwards explains, noting that Stout’s head and gas tank could be made of stone as well as his hands. “But with a guy like Sam Stout who can always push the pace, the most important thing to train is conditioning. His skills are solid, his kickboxing is solid and I'm sure he hits hard, but he's got a great chin, he doesn't get discouraged and he has great conditioning.”

For the past year, Edwards has been sharpening his thugjitsu skills and working on his gas tank in sunny Southern California. “I've been doing a lot of work on my conditioning at the Body Shop in LA with Antonio McKee and the guys down there,” says Edwards, who jokes that some of the younger fighters have said they used to watch him fight when they were in high school. After all these years, Edwards believes he is still developing as a better fighter. “There was a spot where I think my game didn't evolve much, but in the past year or two years it has evolved again and I'm starting to get back to shooting for the front of that curve.”

It isn’t a wholly new Edwards, just a better version of him and on that is even more confident. Edwards made his Octagon return in front of a hometown crowd at UFC Fight Night 22 in Austin, Texas where he scored a solid unanimous decision victory over John Gunderson. Edwards followed this up with a second round rear naked choke win against TUF alum Cody McKenzie, which earned Edwards both a “Submission of the Night” and a “Fight of the Night” bonus. For the third time in less than a year, Edwards will be entering the cage and this time it is against a challenger who is always a potential “Fight of the Night”.

“It definitely gets you more pumped. You do this because you love the competition. I love to get paid and the money is great, and the fame I could do without because that means nothing to me. But to fight a guy like that is exciting. It kind of makes your mouth water. I seriously have been watching his tapes and watching his fights and I start giggling to myself that this is going to be so much fun. I'm really excited about it. It's going to be one of those things. I know he is going to bring all his toys to the sandbox and he's going to be looking to play with them and I'm bringing all my toys too, so it is going to be a good time.”

On June 11th at Rogers Arena, Edwards’ thugjitsu will clash with Stout’s “Hands of Stone”. Almost a decade and a half in MMA, Edwards is more psyched than ever about fighting tooth and nail with best competition the world has to offer in arguably the toughest division. “The way the game is right now it is freaking fantastic, and being a part of it is like living in a movie.”

As long as it isn’t a zombie movie, Edwards should be ok.