Edwards preparing for his debut as just another fight 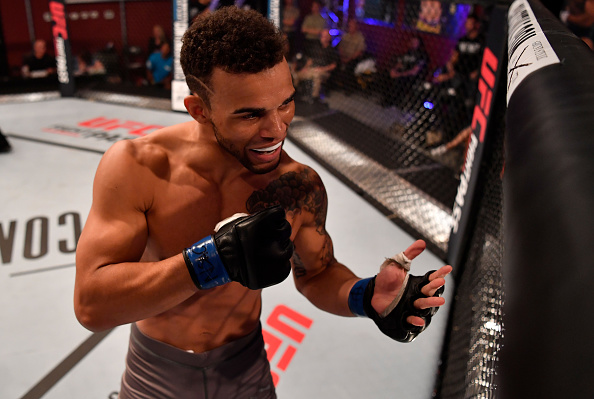 It’s just another fight. But it isn’t. This is the big show, the place all fighters want to be, and making a mark in the Octagon can change everything.

Don’t tell Edwards that because it is just another fight for him, just like all the others were.

“I’ve always trained with the intent to beat the best guys in the world,” he said. “Since the day I started fighting, since I was wrestling in college, my mindset is always that I’m chasing the guy at the top. I’m not really looking at who’s next in line or who my opponent is because opponents can change, opportunities can change. You can be like ‘Raging’ Al (Iaquinta) and get a title fight the day before your scheduled fight. So I always train with the intent to go five five-minute rounds with the best guy in the world. So nothing’s changed from that aspect. It’s just another face or body they’re gonna put in front of me and I’m gonna try to do the same thing I’ve always done – dominate people to the best of my abilities.”

If the 28-year-old lightweight prospect sounds a lot cooler under pressure than most UFC debutants, it’s because he is. In June, there was plenty of pressure on his shoulders when he faced Austin Tweedy in a Dana White’s Tuesday Night Contender Series bout. Win impressively and he may get a UFC contract. Lose or win in pedestrian fashion and it’s back to the regional circuit.

Edwards won. Impressively. In 28 seconds. He got the contract.

The knockout of Tweedy was his sixth first-round KO in as many wins against only one loss in 2014. He’s won five in a row leading up to his bout in Moncton later this month, and he owes his success to an uncanny ability to read an opponent within seconds on fight night. So there are no deep dives on YouTube for footage or scouring the internet for nuggets of info on his opponent. He’ll leave the game planning to John Crouch and company at the MMA Lab in Arizona and the rest he’ll figure out on his own when the Octagon door shuts.

“I don’t do a deep dive,” Edwards said. “I get a feel for the guy’s height, weight, build, style tendencies, and my brain has this weird pattern recognition thing where it doesn’t take me long to figure out a guy’s tics and tendencies and habits – which way he leans heavy and what his natural tendencies are. So one or two minutes of watching film and I’ve got a good idea of the look that I’m gonna get. And then we’ve got so many training partners at The Lab that I’ve seen pretty much every style and combination of styles that you can imagine. So it’s not like anybody’s gonna present anything that’s new or that you haven’t seen. You’ve just got to get familiar with the general game plan that they’re gonna offer and work your strengths and continue your plan as usual.”

And then it usually ends early. That’s a great gift to have, but Edwards admits it may not always be.

“We figure it’s a blessing and a curse because I feel very comfortable in most situations,” he said. “Behind the scenes backstage before a fight, Crouch has said it, my partners have said it, my agent too: I don’t ever look very concerned, I 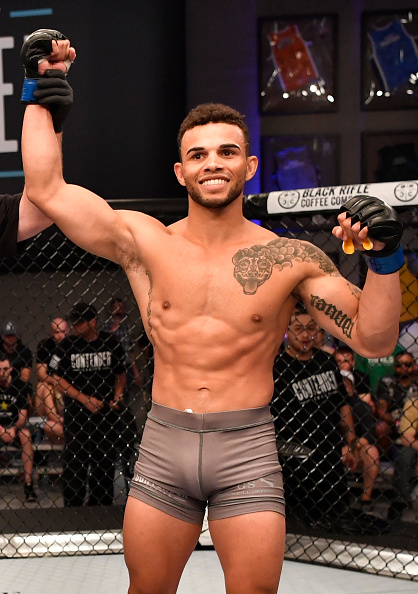 don’t really get worked up because I’m confident in my abilities, and I know that the way my brain operates, it makes fights less intimidating. Chances are, I’m gonna figure out what you’re gonna do and I’ve been blessed and I’ve trained hard enough to have this one-hit knockout power.”

But if the knockout doesn’t come early, an opponent can peck away and peck away and steal a fight. Edwards knows that this is a possibility, but he also knows that if there’s time on the clock, he can change everything.

“You can be the best fighter on the planet and I can be having the worst day of my life and you can beat me up for 14 minutes and there’s still a pretty good chance I’m gonna set you up and hit you with a lot of power and pull off some Derrick Lewis type of deal where you still get knocked out,” Edwards said. “I know on my worst day I can still pull out a highlight reel victory. So it kind of makes everything else up until that point pretty care free. I know I work really hard in the gym, I push my limits, I’m always challenging myself to go above and beyond, my conditioning’s there, my physicality is there, I’ve always been explosive I’ve always had good timing and creativity. It makes the day a lot easier.”

A lot of Edwards’ calm and confidence doesn’t come from his work in the gym or his natural gifts. It comes from a military background that includes three years in the U.S. Army and a current stint in the U.S. Air Force Reserves.

“It definitely provides you with a lot of different perspective,” he said. “The spectrum of things that can go terribly wrong in a cage is not that awful compared to what can go wrong in a combat environment. Also, it’s a whole different level of mental fortitude when it comes to a lot of military training. Everything is stress-induced and that’s the way they train you, to put you under high-stress all the time. You’re doing simple or complicated tasks or challenges, which is under extreme stress under the worst conditions when you’re not feeling great, when everything’s going terribly wrong, and then start from there and see how you can work your way out of it. So once you get accustomed to finding success in the worst case scenarios under the worst conditions, finding success and excelling when everything’s going well or even moderately well is a piece of cake.”

Easy for the guy with four knockouts under 90 seconds to say. Edwards is excited about making the walk to the Octagon for the first time, though. And that walk is almost here.

“I usually don’t get as riled up as most people,” he said. “Everything is in perspective. I always had the mentality that nothing is as good or as bad as it seems. That keeps you level headed. When things are going terribly bad, they’re probably not actually that bad and when things are going awesome, they’re probably not actually that awesome. But I definitely love the sport, I enjoy it, and this is what I would rather be doing, so I’m having a good time.”